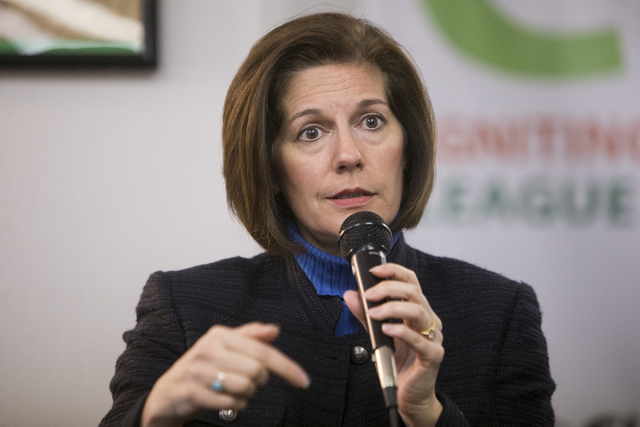 State officials have said that insurers signed up to participate in the Silver State Health Insurance Exchange in 2018 aren’t offering coverage in 13 rural counties and Carson City.

The plans submitted for 2018 offer coverage only to residents in Clark, Washoe and Nye counties.

One carrier is exiting rural counties, and one is leaving the exchange. Both carriers said market uncertainties prompted their moves.

Cortez Masto has signed on to the Marketplace Certainty Act, a bill sponsored by U.S. Sen. Jeanne Shaheen, D-New Hampshire, aimed at controlling costs and keeping providers in markets.

The bill would fund cost-sharing reductions provided by the Affordable Care Act. The reductions lower the consumer cost for deductibles and copays to make insurance plans more affordable.

“By introducing plan after plan to gut the Affordable Care Act and refusing to enforce its key provisions, Republicans are creating chaos in our nation’s health care system,” Cortez Masto said in a statement June 29. “The decision by health insurers to pull out of Nevada’s rural counties, leaving nearly 8,000 Nevadans without coverage, is a direct result of the crisis of Republican leadership in Washington.”

The bill has 19 other co-sponsors, all Democratic senators except for an independent, Sen. Angus King of Maine, who caucuses with Democrats.

One way to help rural Nevadans could be to persuade insurers who are participating in the exchange to amend their 2018 plans before a Sept. 20 deadline to change coverage plans for next year.

In a statement, U.S. Sen. Dean Heller, R-Nevada, said the announcement this week about the state exchange is “yet another example of why Obamacare is a disaster and why it needs to be replaced, but we need to do it right.”

“I’m in contact with the Nevada Department of Insurance and Governor Sandoval as our state looks for alternatives for those who live in the 14 counties with no provider selling insurance on the exchange,” Heller said. “I continue to work with leadership, my colleagues and the administration as I fight for a bill that works for Nevadans.”