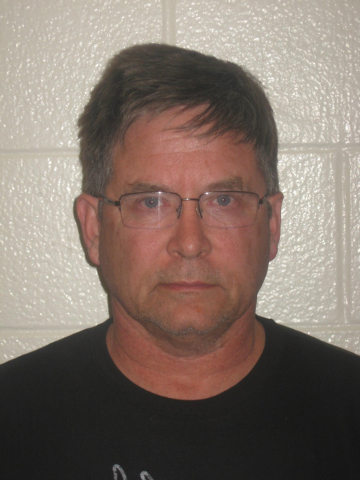 After two teen girls reported that the 57-year-old Eiseman touched them at school, police investigated the reports and found probable cause to arrest him, police said Monday.

That investigation led police to additional allegations that had gone unreported, the report said. Eiseman is alleged to have approached a freshman girl in the hallway and whispered in her ear about two years ago.

“Your outfit looks really good, so good that I should take you into my office and spank you,” the girl told police he said.

Eiseman was booked into the Tonopah Detention Facility on charges of open and gross lewdness and child abuse, and other reports are being investigated, police said.

Eiseman, free on $10,500 bond, is scheduled to appear in Tonopah Justice Court for a status check April 29. He has been removed from his position by the Nye County School District pending the investigation of the criminal charges.

Police were alerted on Feb. 27, after several students told school staff that the principal had accosted them in the cafeteria.

Over the next few days, police interviewed two girls who said Eiseman approached their lunch table. One of the girls had not turned in a form needed for her to play sports, according to police. Eiseman then hit the girl on her arm, causing her to push away from the table. She told him not to touch her, police said.

The girls told police that Eiseman reached out to stop the girl from pulling away while reaching back with his right hand and making contact with a second girl. The second girl said that she felt his fingers on her left breast on the lower portion of her ribs. When the girls began to yell at the man not to touch them, he held the second girl in place so she couldn’t pull away from him, police said.

The girls told police they felt violated and had always felt uncomfortable with Eiseman. Eiseman approached the girls several times during the school year and would start rubbing their backs, the report said.

The lunch table was entirely in the view of school security cameras, the report said, and police could see the principal walking up to the table and one of the girls pushing away from the table a few minutes later.

Eiseman spoke to police voluntarily, the report said. Eiseman told police he saw one of the girls at the table who had not submitted a physical form. He said he couldn’t remember the girl’s name, so he leaned across the table and put his hands on her shoulders to help him remember her name, the report said.

Eiseman told police it was an accident and the girl reacted badly by pushing away from the table. He said the girl then began cussing at him, and he told her not to cuss at school. Afterward he went to the office, the report said.

When asked why the girl was yelling at him like that, Eiseman told police that he jokingly hit the girl’s arm. He denied touching the second girl in any way. He agreed when asked again that it was possible he touched her and didn’t realize or remember it, police said.

Eiseman has been with the school district eight years after 23 years in South Dakota. This is the second legal incident involving a school district principal this school year. Von Sheppard, principal of Floyd Elementary School submitted a letter of resignation following his arrest on domestic battery charges. The District Attorney’s office declined to filed charges.