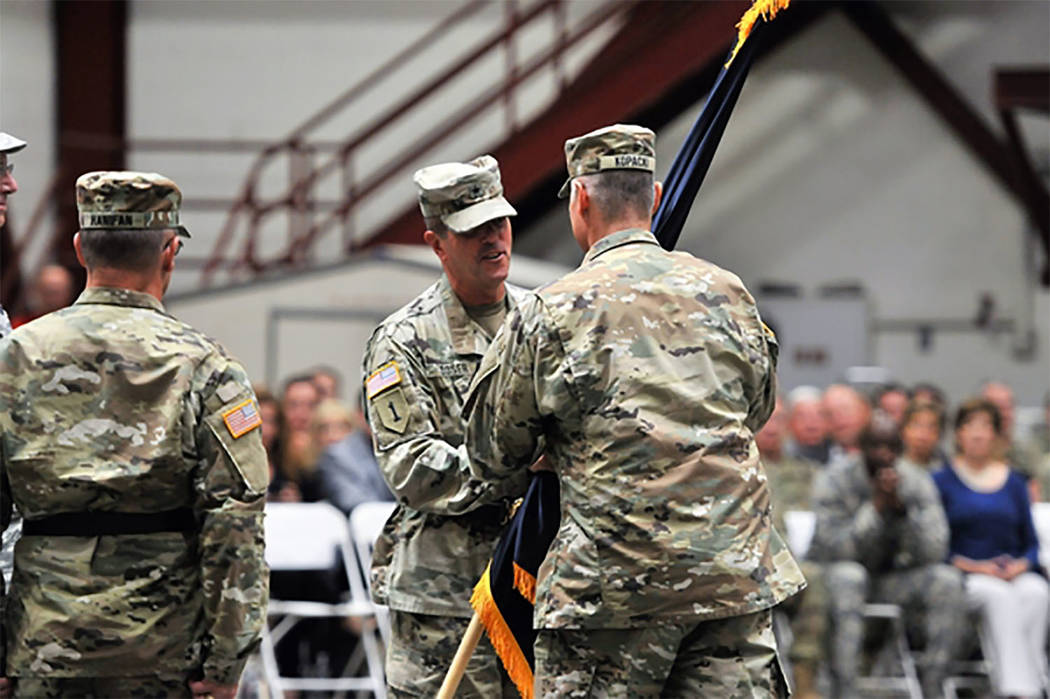 Featuring military tradition and regalia, Brig. Gen. Zachary Doser took command of the Nevada Army National Guard in a change of command ceremony at the Air National Guard Base.

More than 100 soldiers stood in formation representing every unit in the 3,200-soldier organization.

The passing of the colors was the focal point of the ceremony. The previous commander, Brig. Gen. Michael Hanifan, handed Nevada Army Guard flag to Brig. Gen. William Burks, the adjutant general, who forwarded it to the incoming commander, Doser.

The forwarding of the colors from the previous commander to the incoming commander represented the release of responsibility from Hanifan and subsequent acceptance of authority by Doser of all Nevada Army Guard soldiers and equipment.

“I have had the honor and pleasure of serving for, and with, Brig. Gen. Hanifan in many different roles,” Doser said Aug. 13. “He is a great leader, a true friend and someone I admire deeply.”

Doser, 53, of Reno, was previously the Nevada National Guard’s director of the joint staff.

That included responsibility for the coordination of Nevada Guard support to civilian agencies during domestic response operations such as the Lemmon Valley flood response mission this spring in the Reno region.

In his civilian occupation, Doser — a “traditional” Guard soldier who participates in military training one weekend a month and 15 days each year — works as a Reno police detective.

“Brig. Gen. Doser is a dedicated, trusted and an exceptional leader. I have watched him for many years and served with him in multiple capacities,” Hanifan said.

Before his speech in the Reno area to welcome Doser to his new position, Sandoval awarded Hanifan the Legion of Merit to recognize his service during his stint as commander. Hanifan had commanded the Nevada Army Guard since September 2013.

“Today we welcome Brig. Gen. Zachary Doser,” Sandoval said. “I know he’s the right person to take on this awesome responsibility. I know he understands the magnitude of this position and I know that he is trained and ready.”