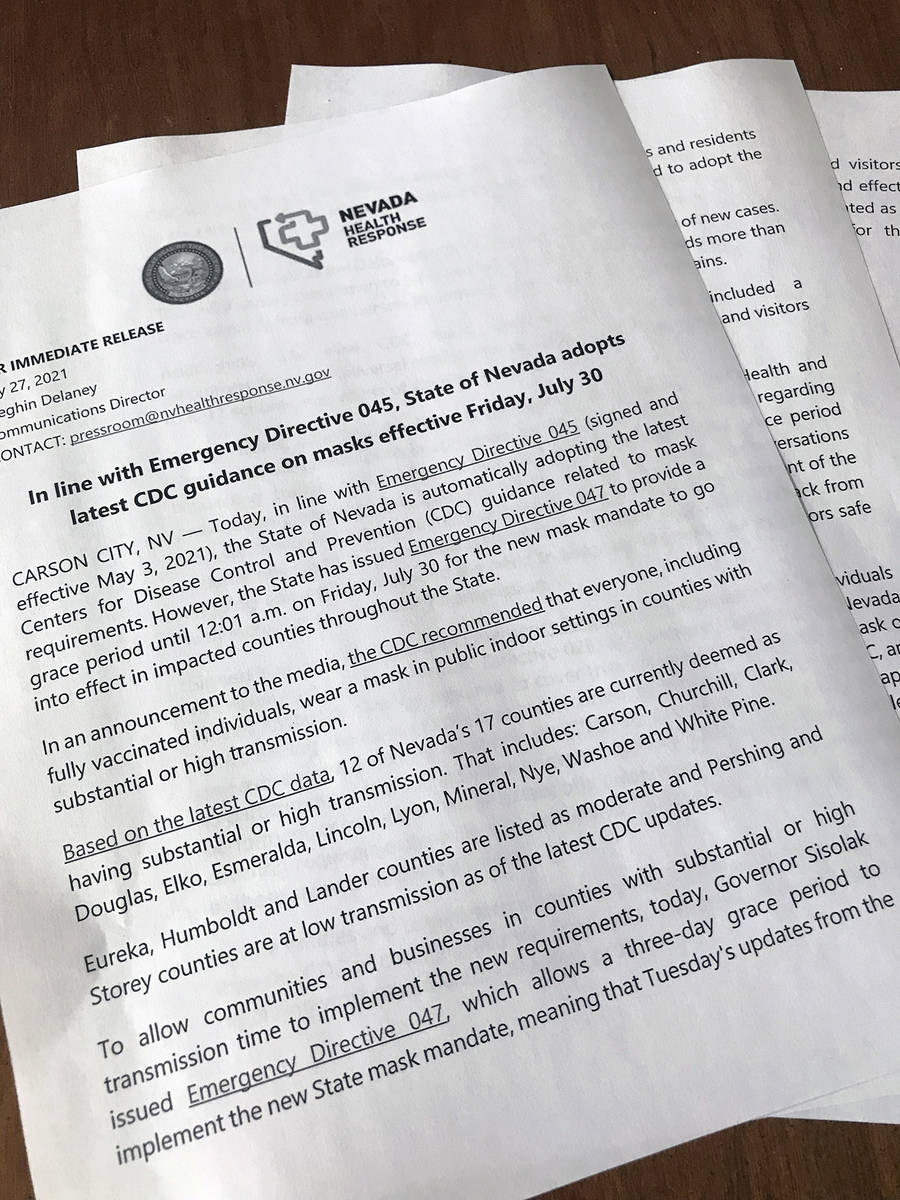 Robin Hebrock/Pahrump Valley Times The state announced on Tuesday that it would be implementing a new mask mandate, requiring everyone, vaccinated or not, to wear mask when indoors in 12 Nevada counties that have "substantial or high transmission" COVID-19 figures. 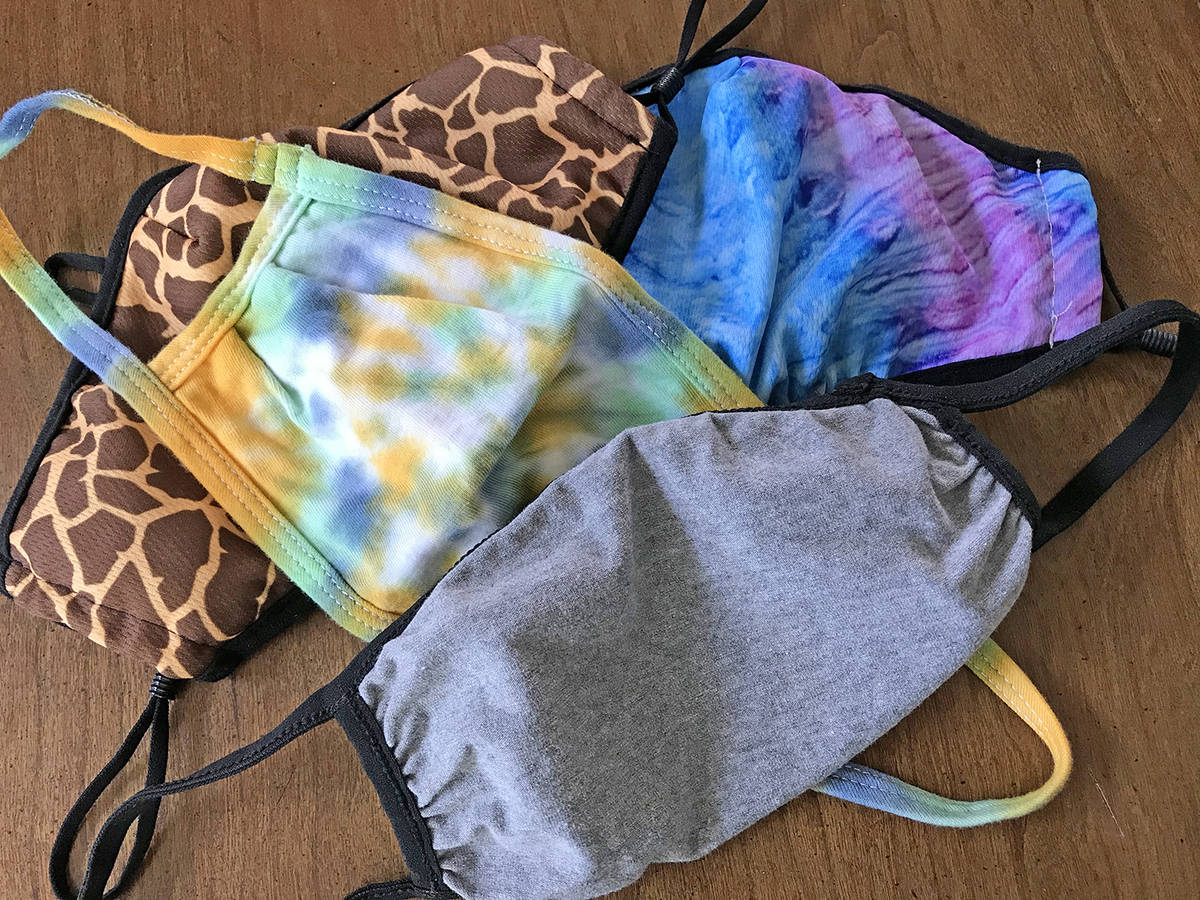 Whether or not a person has been fully vaccinated against the virus that causes COVID-19, all residents and visitors in a dozen Nevada counties, including right here in Nye County, are now required to once again don a face mask when they are in public indoor settings.

The announcement regarding the newest mask mandate in the Silver State came on Tuesday, July 27, following updated guidance from the U.S. Centers for Disease Control and Prevention. With concerns about the COVID-19 delta variant and infection rates on the rise, and “breakthrough” cases of infection in those who have been vaccinated creating additional disquiet, the CDC has switched its line on mask-wearing and is now recommending that everyone wear a face mask when inside public buildings, such as businesses, government offices and other public venues, regardless of vaccination status.

Per Gov. Sisolak’s Emergency Directive 045, signed on May 3, any changes in CDC guidance also automatically trigger changes in the state restrictions related to the COVID-19 pandemic. However, with the abrupt nature of the changes, the state has decided to defer implementation of a new mask mandate in Nevada for a period of three days, allowing counties and communities time to react to the changes. That grace period is at an end, with the new mask mandate going into full effect as of one minute after midnight today, Friday, July 30.

“In an announcement to the media, the CDC recommended that everyone, including fully vaccinated individuals, wear a mask in public indoor settings in counties with substantial or high transmission,” a news release from Nevada Health Response, sent out in the late afternoon on July 27, stated. “Based on the latest CDC data, 12 of Nevada’s 17 counties are currently deemed as having substantial or high transmission. That includes: Carson, Churchill, Clark, Douglas, Elko, Esmeralda, Lincoln, Lyon, Mineral, Nye, Washoe and White Pine.”

The only counties to escape the new mask mandate are Eureka, Humboldt, Lander, Pershing and Storey counties.

The news release noted that the Delta variant is the main proponent behind the recent adjustments. That variant now accounts for the majority of new COVID-19 cases being reported and is said to be even more contagious than any previously observed form of the virus.

The same exemptions that were in place prior to the lifting of the local mask mandate in May are still relevant. In addition, people taking part in certain activities and events, such as athletics, performances and musical shows, do not have to follow the new mask mandate.

When asked if the new mask mandate means that businesses will once again be subject to possible OSHA violations and fines if patrons are found not to be following the mandate, officials with Nevada Health Response confirmed this was correct.

“Yes, as we have learned from the last year and a half, safety is a partnership,” a representative from Nevada Health Response told the Pahrump Valley Times on Wednesday. “That includes state, local officials, community organizations, businesses and the public. The way we reduce these numbers, prevent overwhelming our hospital system and bring down the increased transmission rate with emergence of the high transmissible Delta variant, is to have everyone comply with this mandate.”

The news release touched on the potential impact of the new mask mandate in schools as well, noting, “Additionally, the new CDC mask guidance issued today included a recommendation for universal masking for all teachers, staff, students and visitors to K-12 schools, regardless of vaccination status. State officials, including the Nevada Department of Education and Health and Human Services, have been in conversations with local school districts regarding reopening policies and face coverings for staff and students.”

The Pahrump Valley Times reached out to the Nye County School District to get its take on the situation and Janelle Veloz, school district executive assistant to the superintendent, replied.

“Dr. (Warren) Shillingburg, the Nye County superintendent, continues working with other superintendents around the state to convince the governor’s office to keep the decision of whether masks are worn or not as a local decision,” Veloz stated. “We hope to get this authority, but in the end, we have no choice but to follow all the state directives. We will notify parents of any final decisions or directives before school begins on August 10.”

In Nye County, the mask mandates have been a constant source of contention, with residents divided on the requirements, some arguing that such actions violate personal liberties and others asserting that people should be willing to do whatever it takes to protect the health and safety of themselves and others.

As to how Nye County officials are reacting to the latest mask mandate, residents will have to wait to see what track the Nye County Commission decides to take, with an agenda item to discuss the situation set to be heard at its next meeting, scheduled for Tuesday, August 3 at 10 a.m.

“We added an item to Tuesday’s agenda to address the new mandate. There will be no changes to the current policy until that item is heard,” Nye County Manager Tim Sutton explained when reached for comment.

This means that those who plan on heading out to the Nye County Commission meeting on Tuesday will not be required to wear a mask when arriving but they may want to bring one along, just in case the commission decides to approve changes to the Nye County mask policy during that meeting.

The meeting can be attended in person at the Nye County Commission Chambers in Pahrump, 2100 E. Walt Williams Drive, or in Tonopah, 101 Radar Road. Those who cannot attend the meeting can view it online at www.nyecounty.net and those wishing to actively participate from a remote location can do so using the teleconference system. Call 1-888-585-9008, enter conference room number 255-432-824 and, when ready to comment on a specific item, press *9.

There have been a total of 3,174 reported positives in Nye County since the onset of the pandemic in March of 2020 and a total of 109 deaths.

Author’s Note: This article was updated to reflect the fact that the Pahrump Nye County Commissioners’ Chambers will be open for the upcoming meeting.