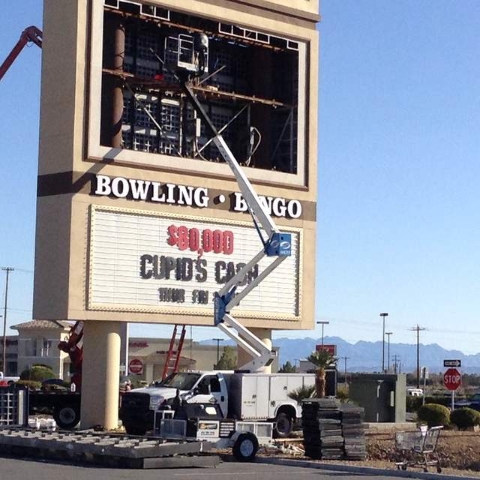 The Pahrump Nugget Hotel and Casino unveiled its updated sign last week, which included an updated video board used to promote events and specials at the hotel and casino. Although those deals displayed on the sign are valuable to residents, some aren’t too happy with the new technology.

Valley motorists have sounded off on the Nugget sign, claiming that it is a hazard to them when they drive in the vicinity of the marquee at night.

Several residents took to social media outlets to air their displeasure with the new sign, stating that it was an eyesore to the community.

“Yeah way too bright I see there [sic] sign causing a lot of problems right there,” Andrew Higginbotham said on Facebook.

One poster even linked the possible cause of a crash that occurred near the Nugget, in front of Taco Bell on Highway 160 on March 4, on the new sign.

“There was a rollover near the sign the other day. I wonder if that’s what caused it,” Lisa Miller said on Facebook.

Not all residents were bothered by the sign and one reader stated, “lmao, seriously?”

Representatives from the Pahrump Nugget explained they have heard various types of feedback, but are happy with the outcome of its new display.

“We appreciate and consider feedback from all of our guests. The majority of our guests love the new addition while some feel it may be too bright,” said Jeremy Jenson, vice president of Golden Casino Group. “We take all feedback into consideration.”

With the amount of work the new marquee required and how pleased the Pahrump Nugget executives are with the latest addition to the hotel casino, it appears the sign and its bright display are here to stay.

So residents who aren’t in favor of the vibrant video screen will have to learn to deal with the extra light in the desert sky. Those who oppose the new signage can make a positive out of a perceived negative situation by taking the property up on one of their advertised specials on its new marquee.