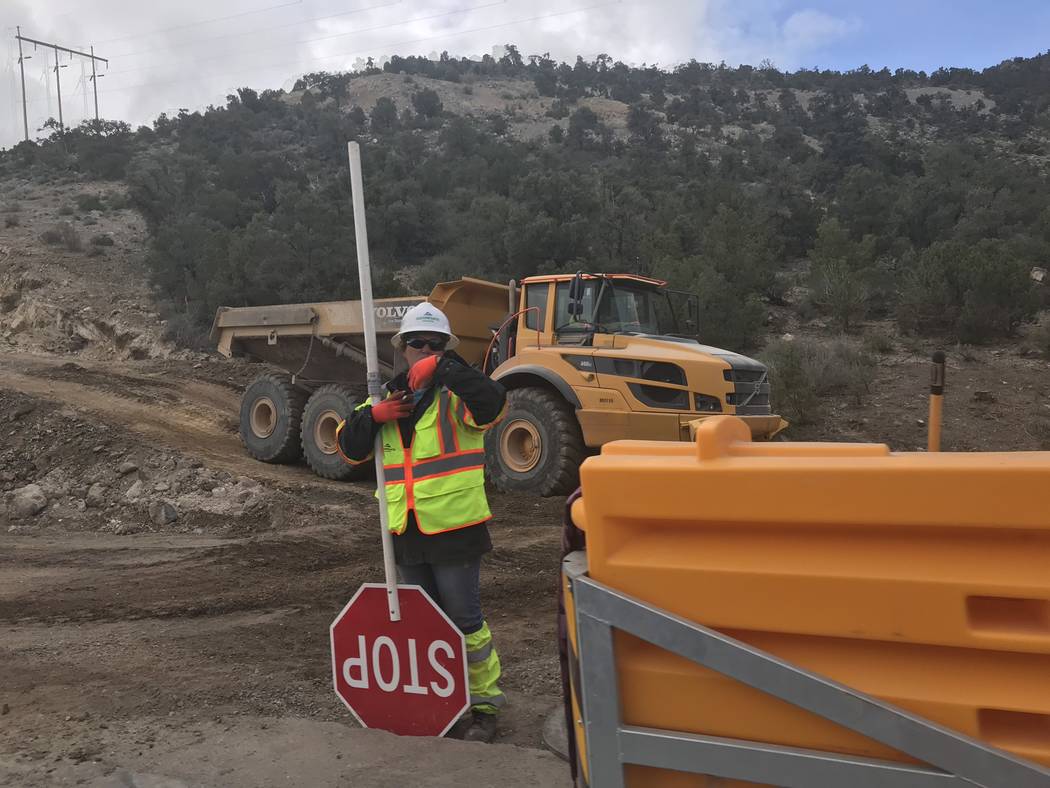 Jeffrey Meehan/Pahrump Valley Times Construction crews work along the mountain pass on Highway 160 on April 13, 2019. Intermittent blasting has been part of the overall project since 2018. 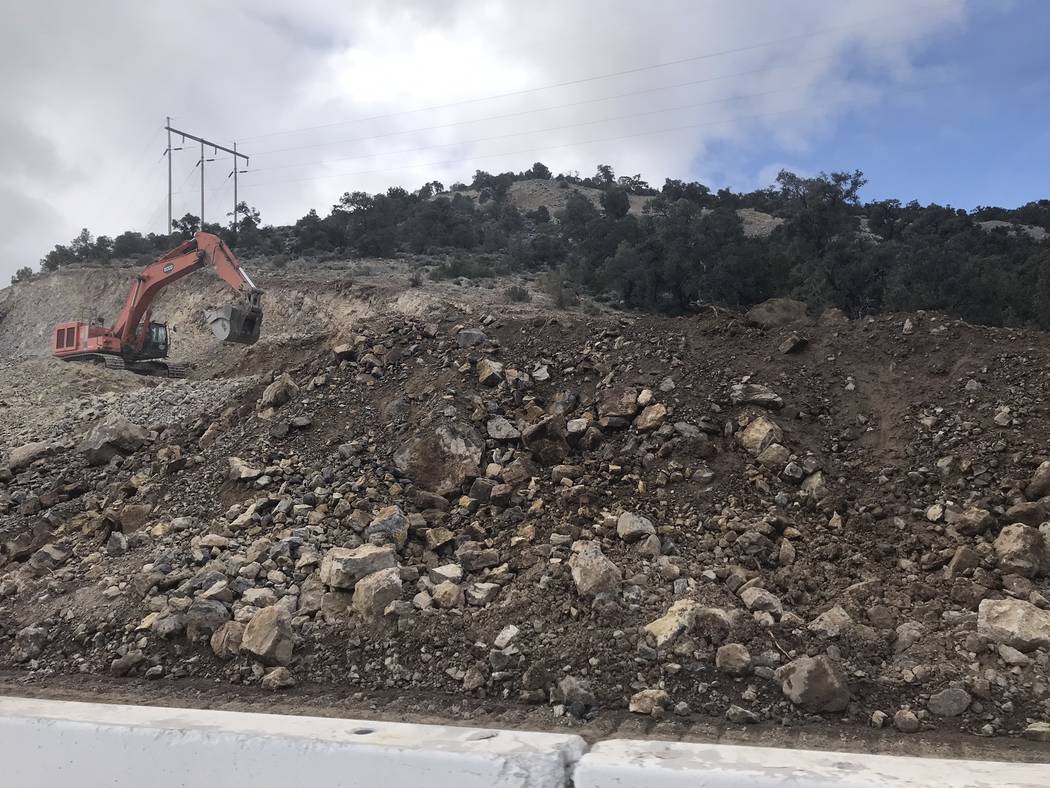 Jeffrey Meehan/Pahrump Valley Times Heavy equipment moves along in the mountain pass along Highway 160 on April 13, 2019. Crews are working to widen the highway. 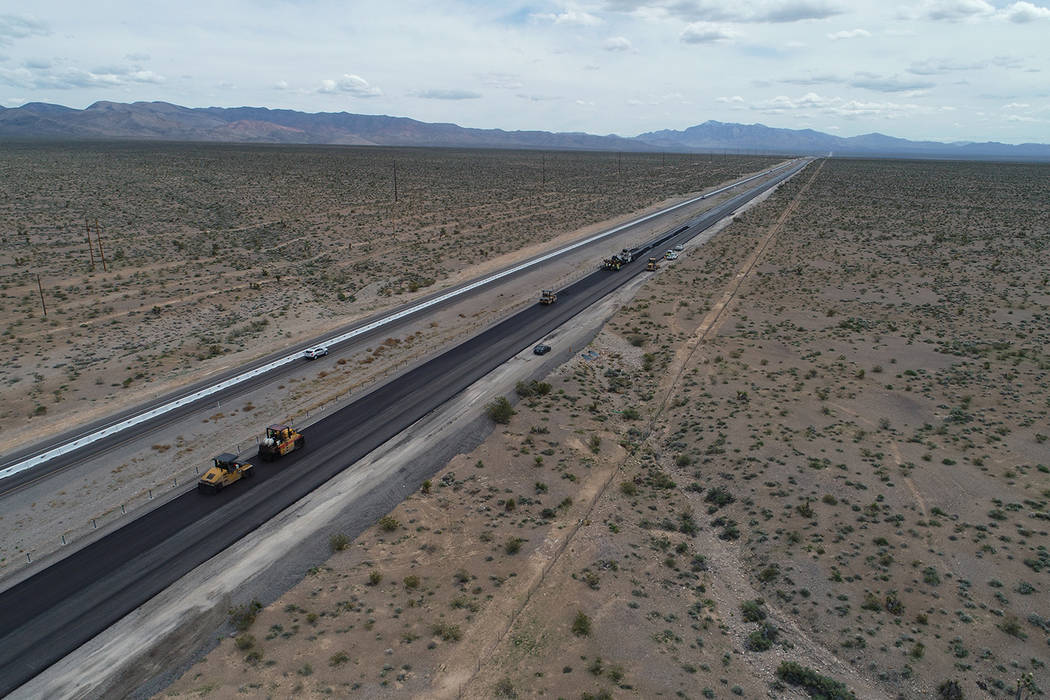 Nevada Department of Transportation Construction crewman have worked over the last several months on a rebuilding and paving project on the eastbound lanes of Highway 160 from Pahrump. The first phase of that project is about to come to a close. 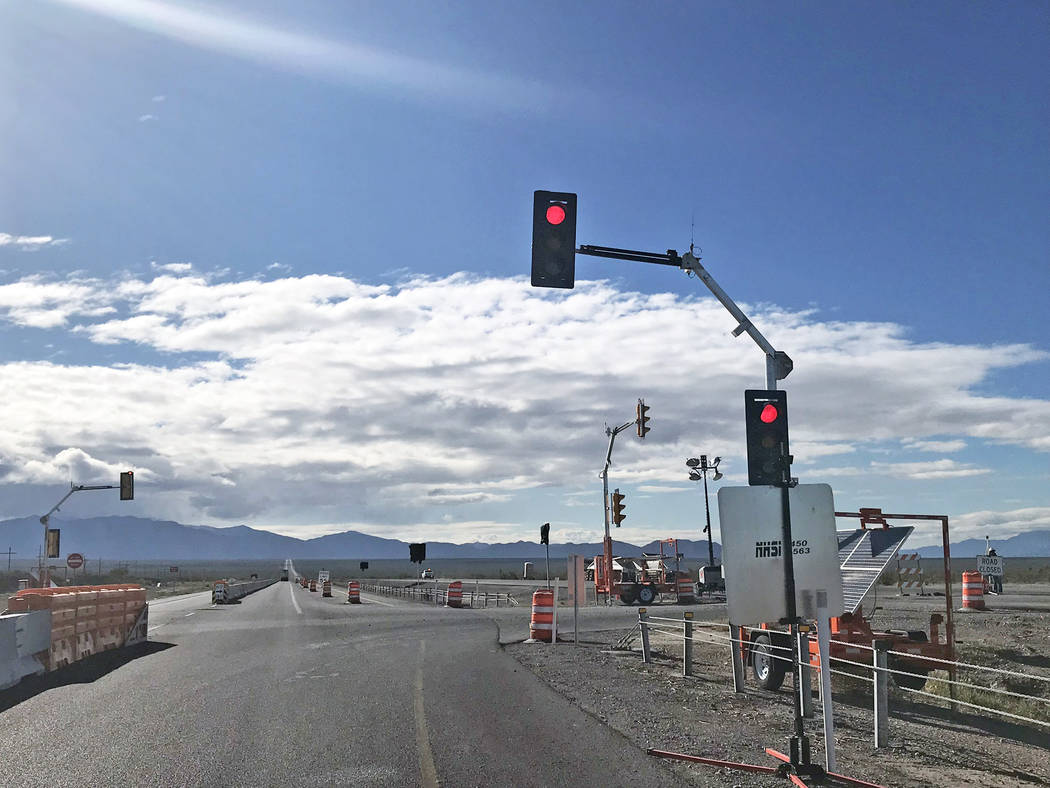 Jeffrey Meehan/Pahrump Valley Times A temporary stoplight was added at Tecopa Road and Highway 160 during the months-long project on the eastbound lanes of the highway. The project is moving into a new phase in early May. 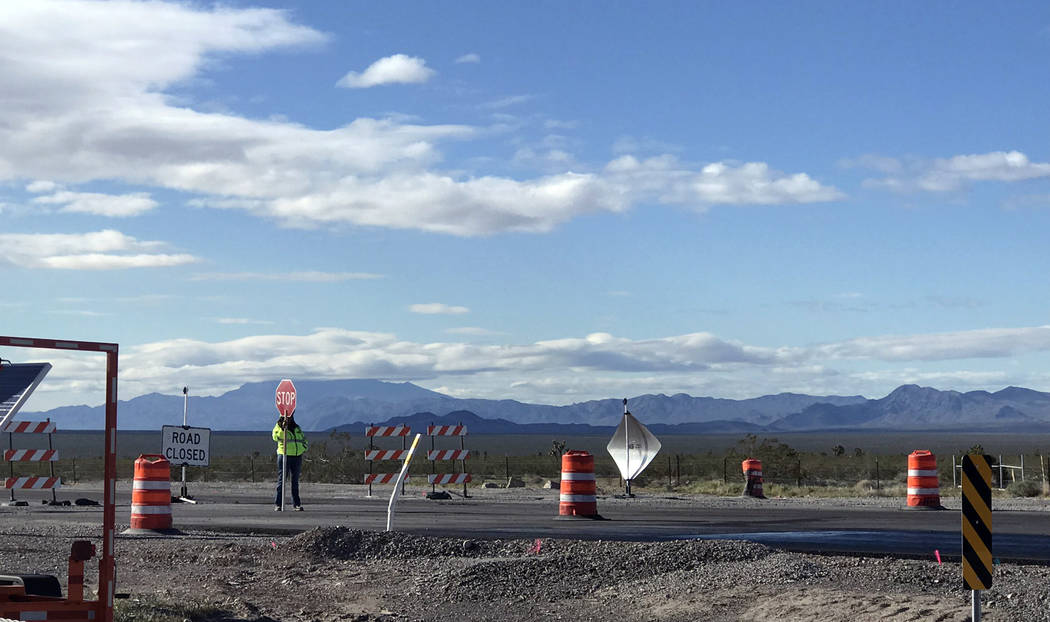 Jeffrey Meehan/Pahrump Valley Times A construction worker stands at the intersection of Tecopa Road and Highway 160 on March 13, 2019. The Nevada Department of Transportation reported that the first leg of a rebuilding and paving project near Pahrump is set to be completed in early May.

The first portion of a months-long rebuilding and paving project along Highway 160 is nearing completion with a second phase pegged to begin in May.

The first of three-phase rebuilding and repaving project, stretching roughly eight miles along Highway 160, just east of Pahrump, is set for completion on May 1, according to a spokesman for the Nevada Department of Transportation. Another roughly seven to eight-mile stretch of road is set for construction soon after that.

“Next, we will move the barrier rail, which takes 10 days,” said Tony Illia, public information officer for the Nevada Department of Transportation, in an email. “The subsequent phase should roughly begin around May 10.”

According to Illia, the second phase will last for about three months on the project involving the eastbound lanes of Highway 160.

With the next phase getting underway, the temporary traffic light set up at Tecopa Road and Highway 160 will be removed, according to information from the state’s department of transportation.

The rebuilding and repaving project’s first phase got underway in mid-January and is part of a nearly $59 million construction project that will widen Highway 160 from two to four lanes in the mountain pass, from the western edge of Mountain Springs to just east of the hill, starting at roughly mile marker 16.

The overall project, being headed by Aggregate Industries SWR, is set to come to completion in July 2020. Work got underway in September 2018 in the Mountain Springs area, where intermittent blasting has been ongoing.

During a presentation to the Nye County Commission, NDOT Crew 906 Resident Engineer Don Christiansen, laid out the overall plan for the project.

Christiansen spoke about plans for animal undercrossings and vegetation in the mountain pass area.

“This will have wildlife exclusion fencing and there will be an undercrossing bridge to keep the Desert Big Horn Sheep, the burros, deer and elk from being hit… There will also be a fair amount of landscape upgrades… We did salvage over 1,700 cactus and yuccas that will be transplanted into the project. And the trees that we removed, we are going to bring back or we are going to plant over 700 juniper, mountain mahogany and those kinds of trees,” Christiansen was noted saying in a Jan. 16, 2019 report in the Pahrump Valley Times.

Motorists should also expect a reduced speed limit in the pass while construction is underway—moving from 55 miles per hour to 35 miles per hour through part of Mountain Springs. Other reduced speed warnings are also posted along other portions of Highway 160 between Pahrump and Las Vegas, with several sections down to one lane.

A temporary traffic light was set in place in the mountain pass in the fall of 2018.

Illia stated in an email that the light was put in place as a temporary fix to help residents in Mountain Springs pull out onto the highway more safely, according to a Nov. 21, 2018 report in the Times.

Blasting has generally started around 12:45 p.m., however, construction crews have moved to an 11:45 a.m. start time in the last several weeks.

Motorists should expect up to two-hour-long delays if traveling from Pahrump to Las Vegas via Highway 160.

Other alternative routes are available during those periods, including traveling to U.S. Highway 95 south to Las Vegas. That route, however, is further in mileage than using Highway 160 from Pahrump.

Motorists seeking information on road closures in the pass and other parts of Nevada can call 551 or visit nvroads.com. Information on blasting times can also be found at pvtimes.com or in the Pahrump Valley Times print edition and on the publication’s social media pages.