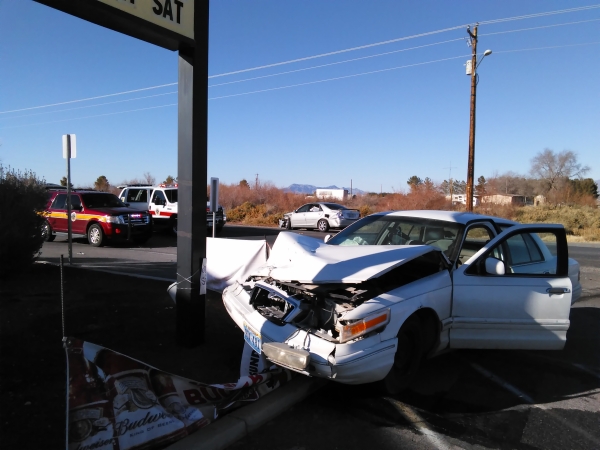 The driver involved in a New Year’s Day fatal crash that took the life of a man riding a scooter is facing felony charges connected to the incident.

While the name of the driver was not available by press time on Tuesday, the person is facing multiple preliminary charges including vehicular homicide, DUI with a death, and failing to stop at a stop sign, according to the Nye County Sheriff’s Office.

An elderly man was killed following a collision between a car and the scooter he was driving late Friday morning.

Police have yet to release his name pending notification of family.

Pahrump Valley Fire and Rescue Services Chief Scott Lewis said the victim was riding the scooter in the area of Betty Avenue and Leslie Street, when they were struck by an automobile.

“The scooter rider did not survive the impact,” he said. “The striking vehicle then rolled over, we believe, more than one rotation following the collision. We also had information suggesting that the driver may have self-extricated just prior to our arrival.”

Lewis said the driver of the car also sustained serious injuries as a result of the rollover.

“We also found significant injuries to the driver of the vehicle,” he said. “We brought Mercy Air 21 to the scene and that patient was transferred and transported to UMC Trauma in Las Vegas.”

As crews were finishing up from that scene, Lewis said they were summoned to the south end of town for a report of a two-vehicle, head-on collision at the intersection of Kellogg Road and Quarterhorse Avenue.

“Troopers with (Nevada Highway Patrol), who were actually coming up to assist the sheriff’s office, came upon that accident and managed it until our arrival,” he said. “Upon our arrival, we found a two-vehicle accident which appeared to be an offset head-on collision. One vehicle remained on the roadway, while the second one careened off into the landscaping at the corner convenience store, where it just missed a secondary light fixture.”

Lewis noted there was no entrapment, as the occupants were out of the vehicles once emergency crews arrived on scene.

“Two patients were transported to the local hospital,” he said.

On Saturday, fire crews were dispatched to Highway 372 and Pahrump Valley Boulevard for a two-vehicle collision just after 3 p.m.

“One patient was mechanically entrapped in their vehicle,” he said. “Crews made good headway and removed the patient from harm in short fashion and he was transported to the local hospital.”

The deluge of emergency calls continued the following day as the fire department was called to a residence along the 700 block of Happy Lane for a structure fire just after 4 p.m.

Fire crews were delayed in locating the residence, as it was one of two owned by the homeowner.

The dispatch originally went out as a residence on 711 West Happy Lane, but it was determined the owner provided the wrong address.

“It was actually found at 791 West Happy Lane, where we found a double-wide manufactured dwelling with smoke showing from the underside of the structure across the front,” Lewis said. “We also found a light smoke condition within the structure.”

Crews were able to access the fire via the decorative, accessory skirting around the structure.

“We found that a controlled burn the property owner had been conducting got away from him and got up underneath the house, igniting the insulation and plastic covering,” Lewis said. “Crews made good progress by controlling the fire without any further extensions to the dwelling. The owner was able to reoccupy the structure at the conclusion of the call. He’ll have some minor damage to repair on the skirting and on the underside of the insulation.”

On Monday, fire crews responded to the Pahrump Nugget for a report of a fire just before 5 a.m.

“They had a small propane fire at the back of the stove, and crews again did a great job,” Lewis said. “The Nugget’s staff activated their extinguishing system within the kitchen area and was able to quickly control the fire and knocked it down. Our crews came in, investigated and found that it was all clear with no extensions.”

This week, Lewis said he and his crew are anticipating another busy week as rains are expected to hit the valley.

“We have potential weather conditions that could hamper any serious incident that occurs,” he said. “The helicopter most likely won’t be available due to the weather. We will be partnering with them for our more serious patients. The crews are holding up well and they did just a wonderful job throughout the past weekend.”