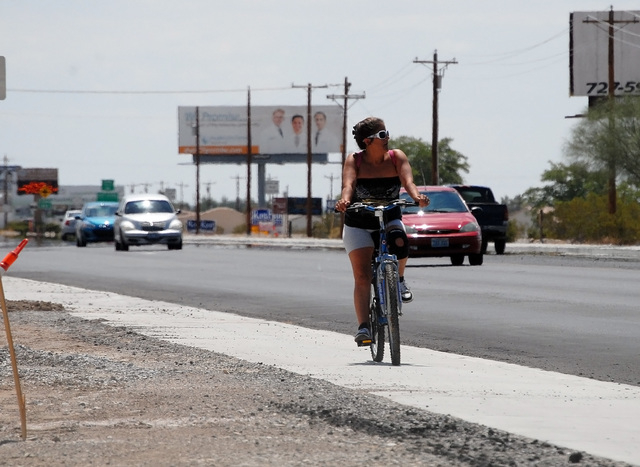 Nye County commissioners on Tuesday adopted the draft Nye County Bicycle Plan at the request of the Nevada Department of Transportation.

The draft plan was adopted with “the understanding that it’s advisory and sharing information.” It doesn’t require expenditures on new roads.

Nye County Planning Department Director Darrell Lacy said the document will allow officials to look into whether bike paths would be “appropriate.”

“There’s nothing prescriptive in this (plan). It essentially encourages and includes some proposals for possible designs for roads with bike paths on it,” Lacy said.

The plan is part of the Nevada Statewide Bicycle Plan and was approved by the Pahrump Regional Planning Commission in April.

“All plans have the same document format with each being developed specifically for the county’s unique needs,” he added.

The initial strategy of the Nevada Statewide Bicycle Plan is to assist local jurisdictions with adopting local bicycle plans that are endorsed by the Nevada Bicycle and Pedestrian Advisory Board.

The Nye County Bicycle Plan notes the major factors of the state plan that are appropriate to Nye County with a concentration on documenting the existing and proposed infrastructure improvements in Nye County.

The two major goals of the plan that will guide the specific objectives and strategies are increasing bicycling’s mode share throughout Nye County in and between communities and reducing crashes that involve bicyclists and eliminating all bicyclist fatalities, according to the documents.

Nye County officials repeatedly brought up a question of the project’s funding. The plan said that funding for bicycling improvements could come from federal, state and local sources.

“I’ll be a little concerned about adopting this plan that may lock us into something that we can’t afford, we can’t fix the roads now to the standards they need to be, let alone bike paths,” he said.

NDOT officials said the plan is not “financially constrained.”

“It’s intended as a guidance tool for future community goals. It’s a living document that will be edited and amended as needed,” Illia said.

Nye County Commissioner Donna Cox said she was concerned about the potential liability that could result from accidents.

Nye County Deputy District Attorney Christi Kindel said any liability would be “limited” because of Nye County’s passing and participating in the plan.

“It was legal’s department understanding when it was reviewed that this was just to give us a voice and open up a conversation that nothing is being dictated, we are not dictating to the state, the state is not dictating to us,” she said.

She said engaging in the plan “may actually lessen liability.”

The plan also includes the list of high priority bicycle improvement projects that were identified through the creation of the plan.

“Nye County has several long-distance touring cyclists that navigate routes between Death Valley and Las Vegas,” Illia said. “Pahrump, as a result, is a key supply destination along this route.”