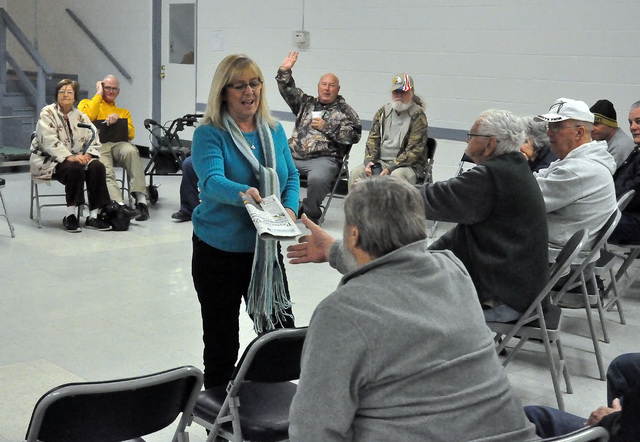 In a letter last month, Laxalt said it couldn’t be enforced because it requires the intermediary gun dealers to contact the FBI. The FBI refused to conduct background checks and the state of Nevada doesn’t have the authority to do it.

Bello echoed Laxalt, saying that the measure is “unenforceable.”

“They passed a law that cannot be enforced, they are asking people to do an act that is impossible to do, and that’s not fair,” she said.

The Nevada ballot measure that would expand background checks to private gun sales and transfers passed by a razor-thin margin on Nov. 8 with 50.45 percent voting for State Ballot Question No. 1. The measure only received support from 26.1 percent of Nye County voters.

The measure was supposed to go into effect on Jan. 1. It required background checks on private-party gun sales and transfers.

According to the initiative, dealers conducting background checks for private transfers must contact the FBI’s National Instant Criminal Background Check System to determine whether the buyer is eligible to purchase or possess firearms under state and federal law.

Instead, it “specifically and unambiguously” directs the licensed dealers who act as intermediaries for such checks to contact the National Instant Criminal Background Check System that’s administered by the FBI, Laxalt said.

“Because the Act requires, under criminal penalty, what is currently impossible to perform in light of the FBI’s position, citizens may not be prosecuted for their inability to comply with the Act unless and until the FBI changes its public position and agrees to conduct the background checks consistent with the Act,” the letter said.

“We will have to wait and see if the FBI stick to their position that they refuse to do this,” Bello said.

“It would have to be rewritten, probably, unless the FBI agrees to go ahead and do that,” she said about the initiative.