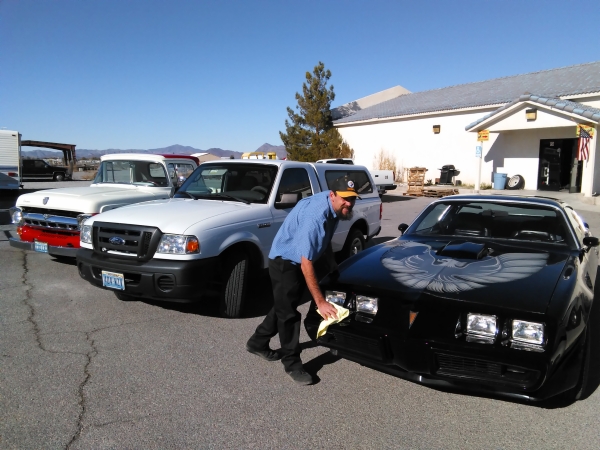 During the holiday season, Black Friday and Cyber Monday are not the only way to save money on large purchases.

Auctioneer Ronnie Gipson said the auction promises to have something for everyone to bid on.

“We have coins and collectibles, including gold and silver, along with antique glassware and marble furniture,” he said. “We have such a huge collection here, including two incredible Parker shotguns which are probably the best models of Parker shotguns that you’ll ever see.”

Also up for bid Gipson said, are several automobiles and motorcycles.

At least one vehicle in the lot is the same model as a classic muscle car from the 1970’s.

“We have a ’57 Ford F-100, which is a beautiful, classic automobile,” he said. “We have a 1961 Chevrolet Impala and a nice Dodge Magnum, along with a Ford Ranger and the black Trans Am. We also have some nice antique furniture pieces that came in as well as a stunning barrister lawyer’s desk.”

Bidders will have the opportunity to preview the items on Thursday between 9 a.m. and 6 p.m.

As the auction house approaches its 15th year doing business in Pahrump, Gipson reflected on what has been at times, a long, strange trip to the present.

“I’ve been doing auctions here for the past 15 years working right next to Ski Censke,” he said. “When you look back, it all started out with the Studebaker estate and that was about 15 years ago, out on Bell Vista. That was our very first big auction in Pahrump. That had such a great attendance, we even had a couple of people flying out here in helicopters to preview the items.”

Over the years, the auction house has seen its number of odd collectibles which were auctioned off.

Gipson recalled a time when he held an auction for a large collection of windmills after the owner passed away several years ago.

“He had two-acre parcel of land that had 24 antique windmills that were fully functional,” he said. “The gentleman was also the vice president of the National Windmill Club. When word got out that he had passed away, we had people coming from all over the United States and Canada just because of those windmills he collected.”

Another auction Gipson said, involved thousands of firearms collected by a Pahrump man.

“The gentleman was an avid gun collector and in the building behind his house, he had accumulated well over 5,000 guns and probably another 20,000 bayonets. He also accumulated a couple of million rounds of ammunition. That auction was phenomenal. We also assisted with the Liberace auction in Las Vegas, where we set an all-time record at that time for the most views of the catalog.”

Friday’s auction will also include a rifle raffle.

“The VFW buys a very nice firearm and they sell raffle tickets here,” Gipson said. “The VFW will be here and we will do the drawing for a beautiful Vietnam-era shotgun which is fully functional and a very gorgeous gun.”

“One of the things that I think is amazing, is about two years after we started doing auctions out here, we got involved with fundraising,” he said. “We have always made it a point that so long as somebody can guarantee that 100 percent of the money stays here in Pahrump, then we are very adamant about doing an auction. We never charge to do an auction and I would say well over $100,000, if not more has been raised for local charities here.”