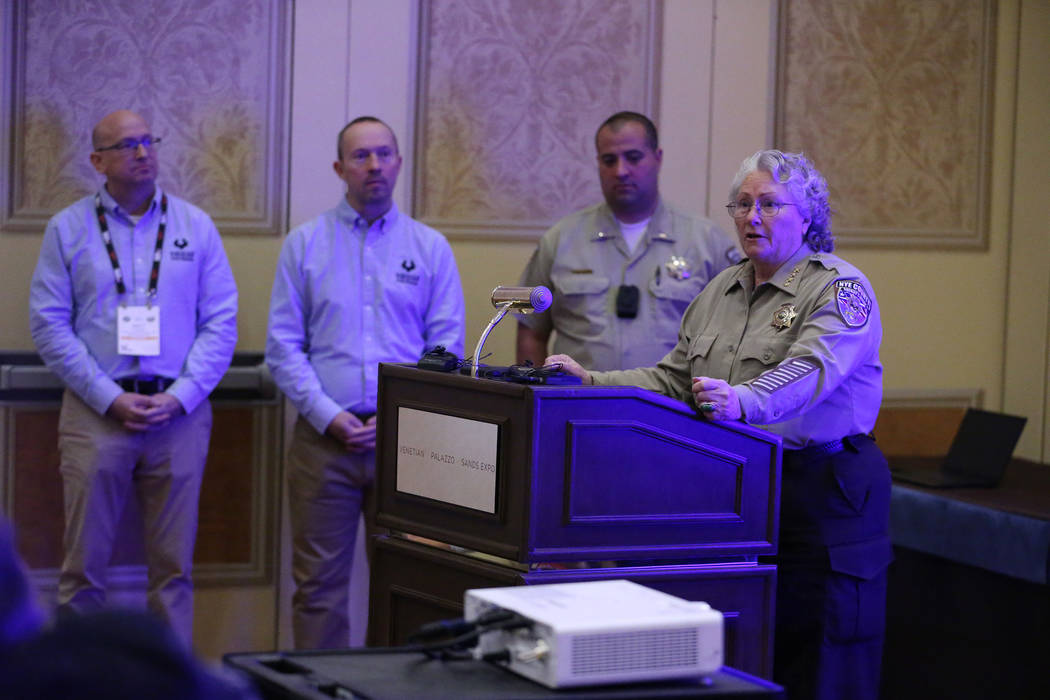 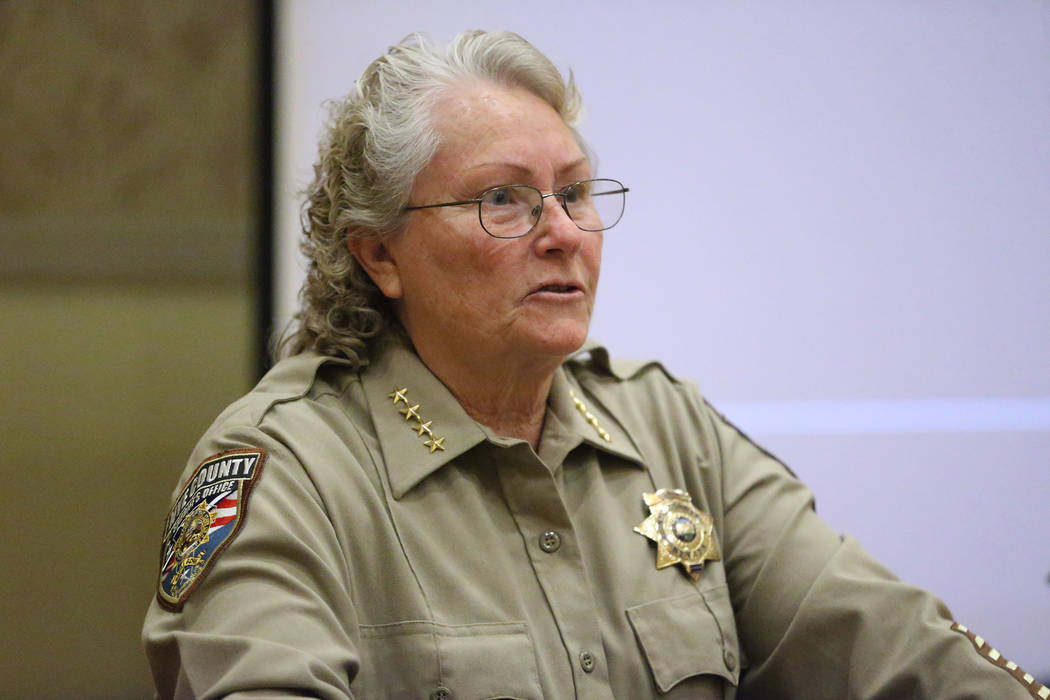 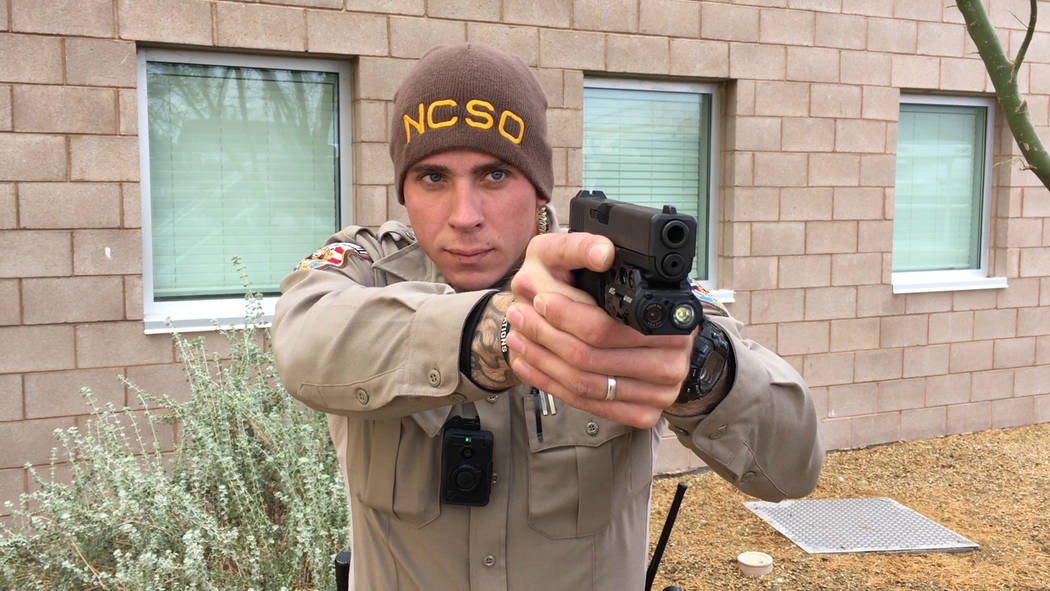 Viridian/Special to the Pahrump Valley Times (still shot from video clip) A Nye County Sheriff's Office deputy is pictured holding a firearm with new weapon-mounted camera technology that the office is testing and evaluating.

The Nye County Sheriff’s Office announced the testing and evaluation of weapon-mounted cameras at a press conference at the Venetian Resort Las Vegas.

Nye County Sheriff Sharon Wehrly made the announcement, along with officials from Minnesota-based Viridian Weapon Technologies, the maker of the technology, FACT Duty Weapon-Mounted Camera, on Wednesday about the impact of the new technology, Viridian announced in a news release.

“We believe in transparency and providing the best technology for our deputies,” said Nye County Sheriff Sharon Wehrly in Veridian’s news release.

“This Weapon-Mounted Camera system documents the facts of each encounter providing an un-biased record of the actions taken by law enforcement and the public we serve. We have some deputies who are carrying this on duty now as a test program and if the test and evaluation program is successful and financial funding is secured, we will then deploy the WMCs (weapon-mounted cameras) across the agency.”

The sheriff went on to say in the video release that, “Really in law enforcement, the only thing we want to do is find the truth, and this tool, …is going to fill that void, so we’ll have video available from the onset of any deployment right through the use of deadly force. That’s transparency.”

The sheriff’s office is one of more than 400 other agencies that have used the technology that came to the market in 2017, according to information on Viridian’s website. The technology has already been used by Southern Nevada agencies, including the Las Vegas Metro Police.

Viridian did announce some benefits the devices have.

“These WMCs (weapon-mounted cameras) record automatically, provide an unobstructed view of critical use-of-force events from the end of the firearm and generate significantly less data than body cameras,” the company said in a press release.

The camera has a 1080p full-HD digital camera, a microphone and a 500-lumen tactical light, according to a release from Viridian. The camera is automatically activated any time the weapon is drawn from an officer’s holster, which Viridian states is possible through its proprietary instant-on technology.

In a release, Viridian stated that the technology eliminates the risk “of failure to manually turn on the camera during a critical event, but it also keeps the officer from fumbling with cumbersome equipment.”

Company leaders for Viridian noted positives for the Nye County Sheriff’s Office taking on the new technology in a news release.

“Sheriff Wehrly and her officers are on the forefront of modern policing. They have built a great rapport with their community and a lot of that is based on openness and engagement. The FACT Duty is designed to capture what really happened if there is an officer involved shooting. Sheriff Wehrly’s deputies patrol a very large area with remote locations. Adding the FACT Duty WMC will add another layer of transparency to the NCSO officer involved shooting or use of force incidents when they occur.”

This isn’t the only video equipment that the Nye County Sheriff’s Office is using.

The Nye County Sheriff’s Office received approval to purchase 130 body-worn cameras and 78 dash and rear-seat cameras during an October 2017 meeting of the Nye County Board of Commissioners, according to an August 2018 report in the Pahrump Valley Times. The equipment was furnished through an over $1.1 million contract with PCN Strategies.

The article also stated that the body cameras were “partially funded from the following sources: project G17018, fund 10340 grants in the amount of $155,816.90; 10234 Nye County Sheriff Public Safety Sales Tax in the amount of $515,206.70 from FY17 approved spending plan; and $108,108.00 per year from FY19-22 spending plans, to be submitted to the board for approval at later date.” That information was derived from material provided during an October 2017 Nye County Commission meeting, the Times’ article stated.

This move followed the passage of Senate Bill 176 in the 2017 Nevada legislative session—signed into law by former Gov. Brian Sandoval. The bill required peace officers across the state to “wear a portable event recording device while on duty,” text from the legislation stated.

That law expanded on legislation from the 2015 legislative session that brought a law requiring the Nevada Highway Patrol to wear portable event recording devices.