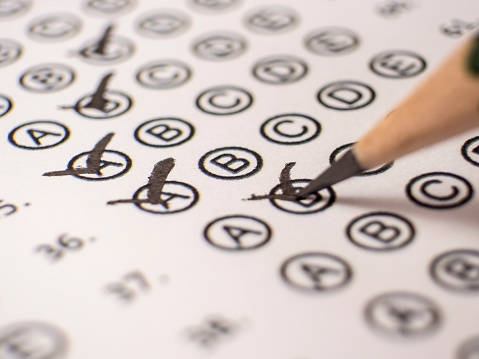 High school juniors in the Nye County School District had their third consecutive year of improvements on a college readiness test in 2017, though the district’s numbers still lag in the national and statewide averages.

A report released earlier this year from the Nevada Department of Education shows students tested in Nye County of high school juniors ranked 15th, out of 18 counties in the state, on the average composite score for the ACT exam. Just three years prior, high schoolers in the Nye County School District were dead last and have improved every year since.

“Even though the tests were flat across the state, our gains were good enough to come over the top,” said Dale Norton, Nye County School District superintendent.

The statewide composite score for high school juniors taking the ACT exam, in all school districts, was 17.4, the third straight year Nevada high schoolers have seen this score.

In terms of what that means for the state is that only 10 percent of Nevada’s high school juniors and seniors are “college ready,” according to a news release from the state board of education.

“I remain very disappointed in our overall results,” said Steve Canavero, superintendent of public instruction for the Nevada Department of Education. “These results are unacceptable and for the benefit of our kids’ future, we must begin to improve.”

Norton said he does want to see improvements, while still recognizing his district’s rise in average composite numbers as a “huge gain.”

“I want to be further than that, but we’re making those small increments to make gains,” he said.

In a state-by-state comparison, Nevada was last for its average composite ACT scores, according to a report from ACT Inc., a nonprofit organization that owns the college readiness exam.

The numbers differ from Nevada’s education department, as the results are based on graduating seniors or the class of 2017.

The top scoring averages were mostly on the East Coast. New Hampshire had an average composite score of 25.5, Massachusetts had an average of 25.4, and Connecticut was 25.2.

Low-ranking states included Nevada, South Carolina and Mississippi, that had composite scores on graduating seniors at 17.8, 18.7 and 18.6, respectively.

College readiness levels remained stable across the nation. Overall, 39 percent of the class of 2017 met three out four benchmarks for college readiness on the ACT exam.

That percentage is up from 2016’s 38 percent but down from 40 percent two years ago.

The number of graduating seniors in 2017 that met all four benchmarks on the ACT test was 27 percent, according to a report from ACT Inc.

The four benchmarks on the ACT that measures college readiness are English, science, math and reading, where test takers must reach 18, 23, 22 and 22, respectively.

The number of high school juniors and seniors that hit all four benchmarks in the Nye County School District has grown to 9 percent in 2017. In 2016, it was 5 percent, lower than 2016’s 6 percent of students that met all the benchmarks, according to the Nevada Department of Education.

On more of a local picture, Pahrump Valley High School was above par against the Nye County average, at a 17.9 ACT composite average, against 17 for the whole Nye district.

Taking the test is a graduation requirement, though students don’t have to meet a specific score to receive their diploma. The ACT test is free to students.

ACT scores are one several metrics that the state’s education department will use to show student academic performance improvement across the state as part of its plan under the Every Student Succeeds Act (ESSA), signed into law in 2015 by President Barack Obama. The state’s education plan was approved in August by the federal Department of Education.

All states are required to submit a plan, under ESSA, that sets out goals and timelines on how students will improve academic performance to the federal Department of Education. That plan, however, must also be approved at the federal level.