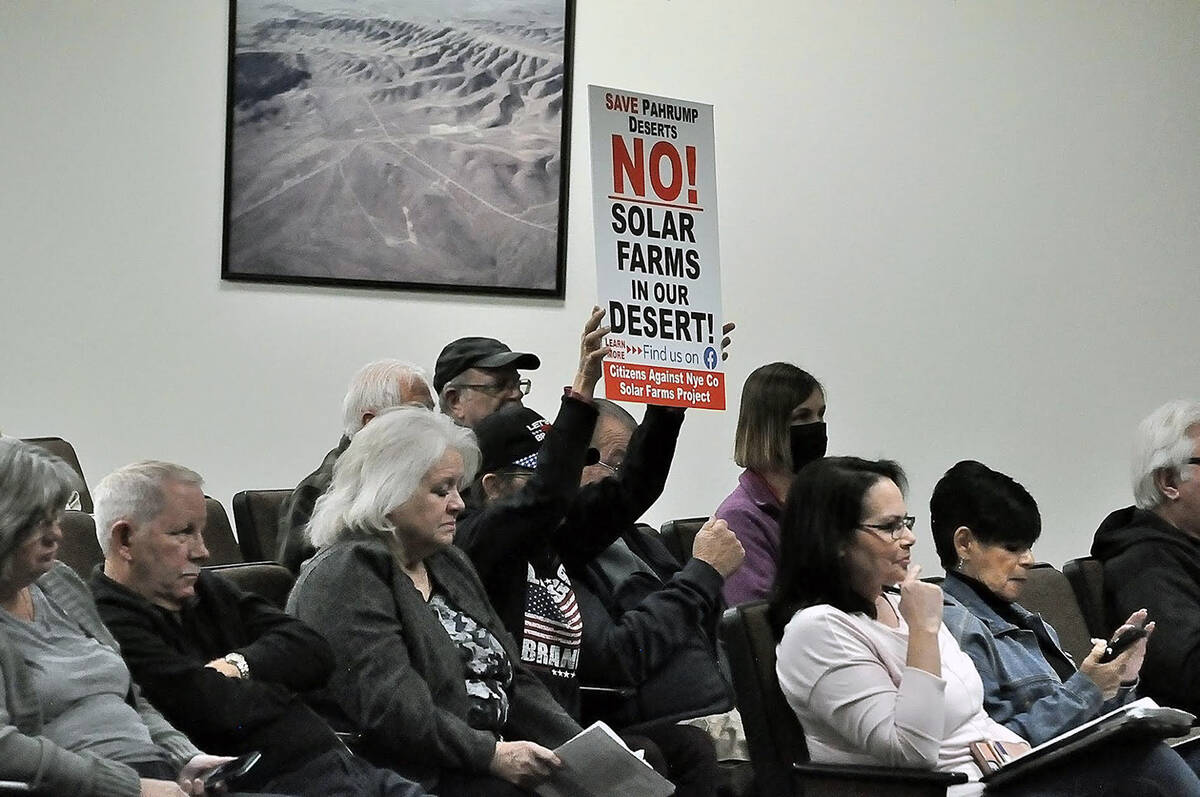 Horace Langford Jr./Pahrump Valley Times Residents are pictured at the Nye County Commission's Dec. 16 meeting, at which the board voted 5-0 to oppose the Rough Hat Nye County Solar Project. 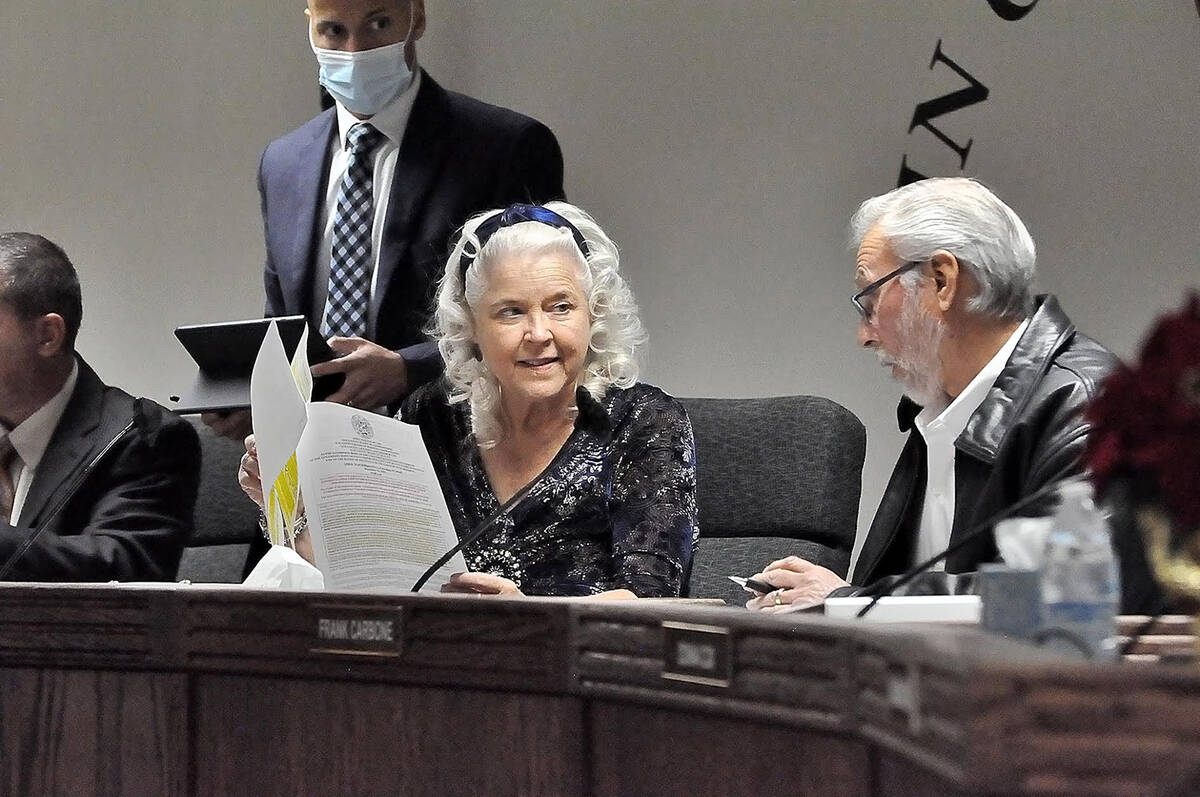 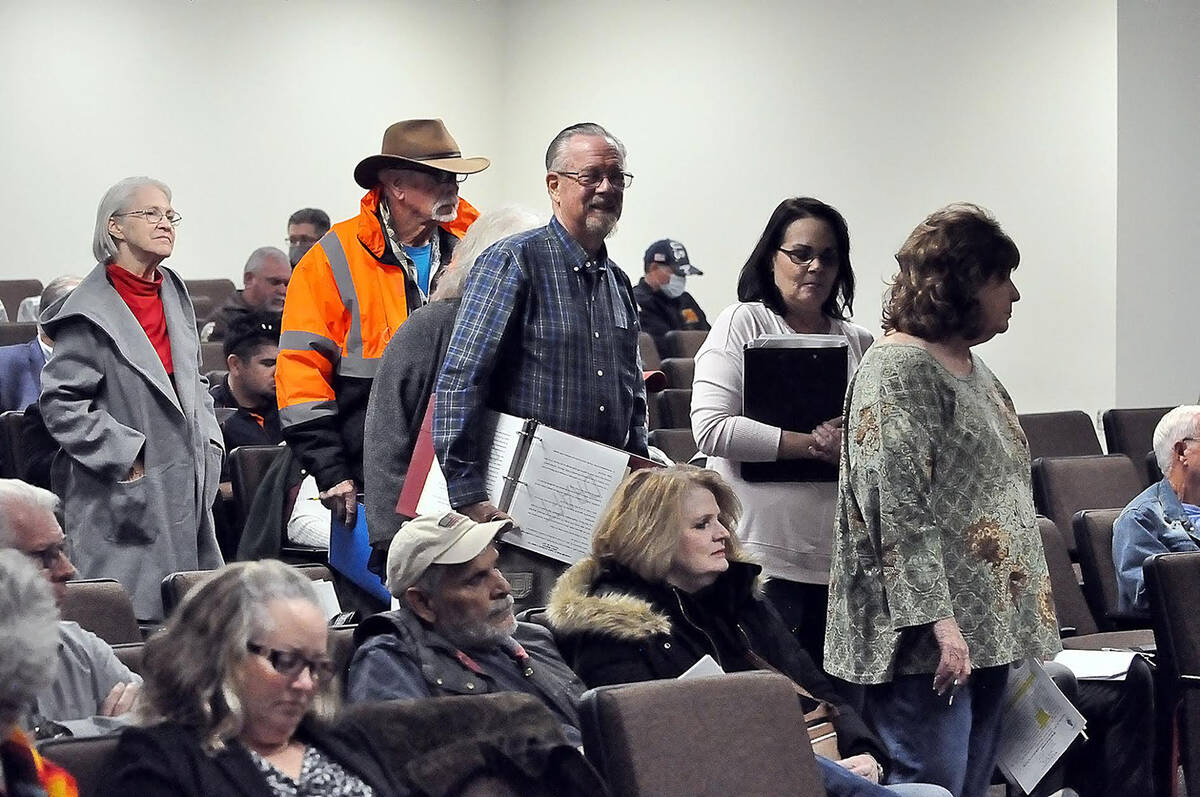 Horace Langford Jr./Pahrump Valley Times Local residents and even those from other communities are seen waiting in line for their turn to make public comment on the Rough Hat Nye County Solar Project.

Nye County Commissioners have voted 5-0 to oppose a controversial solar project planned for the area.

It means Candela Renewables will have a tougher path to develop its Rough Hat Nye County Solar Project.

The decision from the commission comes following weeks of public outcry and a series of meetings held by the Pahrump Public Lands Advisory Committee, an advisory body that discusses projects relating to lands issues in and around the valley.

After hearing from many in the community who oppose the Rough Hat Nye County Solar Project, the advisory committe decided to withhold support for the project. That recommendation was a key piece of the puzzle when the Nye County Commission took up the topic on Dec. 16.

Many opponents have cited the project’s potential negative environmental impacts and its effect on recreational activites. Some fear a drop in housing values, if the project is approved.

The Rough Hat Nye County Solar Project is a 500-megawatt photovoltaic solar field proposed for lands managed by the Bureau of Land Management in the southeastern part of the Pahrump Valley. The study area outlines roughly 3,400 acres but after Candela Renewables created its first preliminary project layout, company officials said the footprint would only cover about 2,300 acres of that study area. As proposed, it would be located near existing residences, as well as Hafen Elementary School, and would sit atop recreational land.

Residents say they want to keep the small-town, rural feel of the area, complete with its wide open, undeveloped spaces and a majority of those against the project agree that it would irrevocably change the nature of the town.

“Maybe the best way to manage that land is to leave our beautiful desert unspoiled and untouched, at least in a residential place, near a town,” said Judy Westgate, a Pahrump resident who opposes the project.

But Linda Bullen, an attorney for Candela Renewables which is heading the solar project, said plans are still in the early stages and maintained the company is willing to compromise with the community.

“The project has already been modified significantly since it was first presented at [Pahrump Public Lands Advisory Committee], demonstrating Candela’s willingness to respond to and address community concerns,” she said. “The project will continue to evolve based on input from the public and other factors.”

Any hard-and-fast decision by the commission would be premature, Bullen said.

Candela Renewables has not yet filed to obtain the special-use permit or development agreement required by Nye County for developing the project.

Nye County Commission Chair Debra Strickland, who acts as liaison to the Pahrump Public Lands Advisory Committee, has been monitoring the situation since October and she opposes the project.

“Since it does fall within my district… I’d like to have a letter of opposition to go out to Candela in regard to this project for Rough Hat and of course, copy [Bureau of Land Management] on that,” Strickland said.

Commissioner Leo Blundo reiterated that the public is not against solar itself, but the Rough Hat project just wasn’t going to work as currently proposed.

“I don’t know in what universe you thought you could go within 750 to 1,000 feet of someone’s backyard and think that would have been appropriate,” Blundo said. “Whatever iteration that’s been presented and is still before us, I don’t see that passing any muster.”

Commissioner Donna Cox said for her part, she was skeptical of any promises of public benefit from a private company, due to past experiences as a longtime county commissioner.

“I was part of the prison project and I will tell you, [Candela Renewables] is no different than those people were…” she said, citing her involvement with the construction of the Nevada Southern Detention Center. “They promise you the world but they give you nothing. Believe me.”

Commissioner Bruce Jabbour said public opinion is obviously against the solar project. He reiterated that many in the public are concerned about the impact the project could have on the sole-source aquifer that supplies water to the valley.

“They would be sucking the water from our basin, from our wells, and we cannot afford for that to happen,” he said. “It’s very simple.”

Candelda Renewables is expected to continue to move forward with its application at the Burea of Land Management level. According to Nye County code, the company can only construct its field after first obtaining a special-use permit, which could be unlikely after opposition from the commission. A development agreement between Nye County and Candela would also have be approved by the commission.

The BLM is expected to host a public meeting on the Rough Hat Nye County Solar Project in the coming weeks. Details are forthcoming.