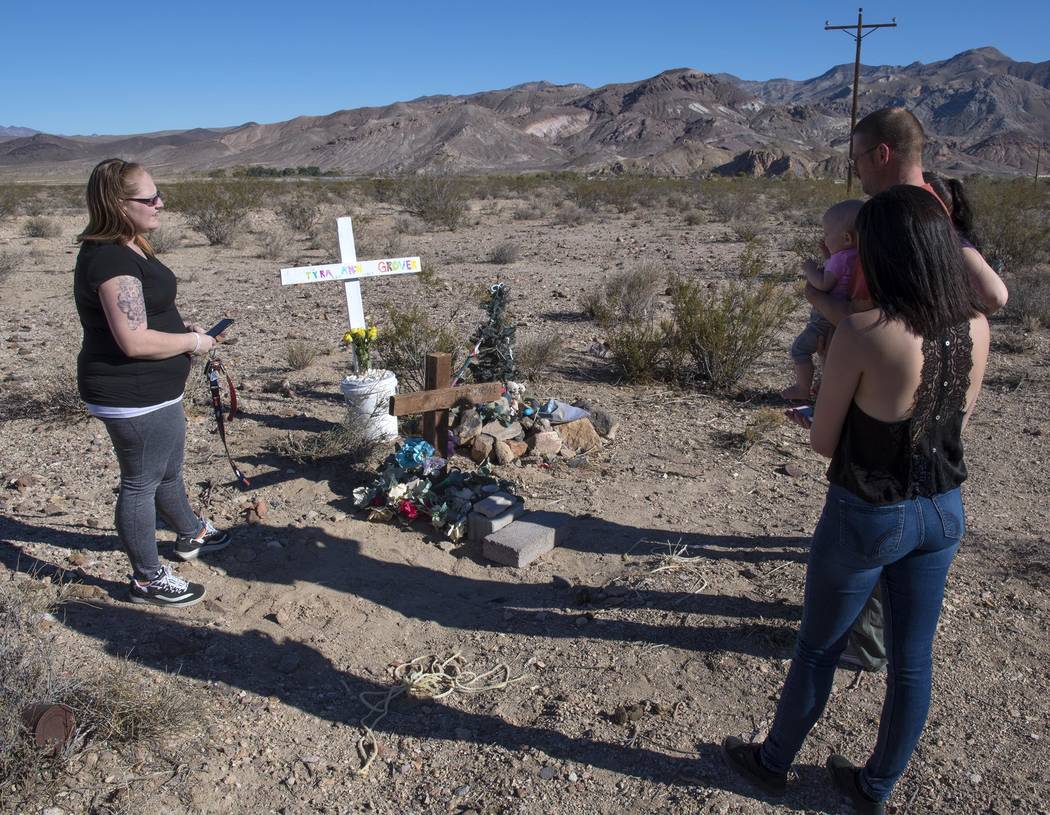 Special to the Pahrump Valley Times Jordahnah Toviah Grover (left), mother of 14-year-old daughter, Tyra Welch Grover, who died in a car crash in 2015, stands at the memorial site on Oct. 24, 2017. Jordahnah held a rededication ceremony for Tyra at Indian Spring Road, a gravel road off North Avenue in Beatty, where the teenager was killed.

A Tonopah woman remembered her teenage daughter, who was killed in a car crash in 2015, with a rededication ceremony at the memorial site on the two-year anniversary of her death.

Jordahnah Toviah Grover put up a new cross bearing her daughter’s name, added a few mementos and straightened up around an area that sits along Indian Springs Road, a gravel road just off North Avenue in Beatty, on Oct. 24, 2017.

That’s where Jordahnah’s daughter, Tyra Welch Grover, was killed in a rollover crash exactly two years prior from that day at that location. Tyra was 14 years old when she died.

Jordahnah was joined by several family members on her visit to the memorial site, which had been destroyed.

The vehicle parts from the crash had been removed from the area, though some broken glass still remained.

Jordahnah said she visits the site of the tragedy to speak with her daughter. At those times, she tells her that she loves and misses her.

In 2016, she released several helium-filled balloons at the site of the crash in Beatty and in Tonopah. The balloons were released on Halloween, as it was Tyra’s favorite holiday, Jordahnah said.

Going forward, Jordahnah is also asking the public for help with another dedication for her daughter.

She explained in an interview earlier this year with the Times-Bonanza that her daughter never got to see the world.

With this sentiment in mind, she started a Facebook page named “Postcards for Tyra” with the idea that individuals or groups could send in postcards from across the globe, as a way to show Tyra the world.

This is an ongoing project that Jordahnah is putting together. She’s received over 40 postcards from places such as South Korea, Singapore and from all across the U.S.

Postcards can be sent to Jordahnah at P.O. Box 3278 Tonopah, Nevada 89049. Information can also be found on the “Postcards for Tyra” Facebook page.