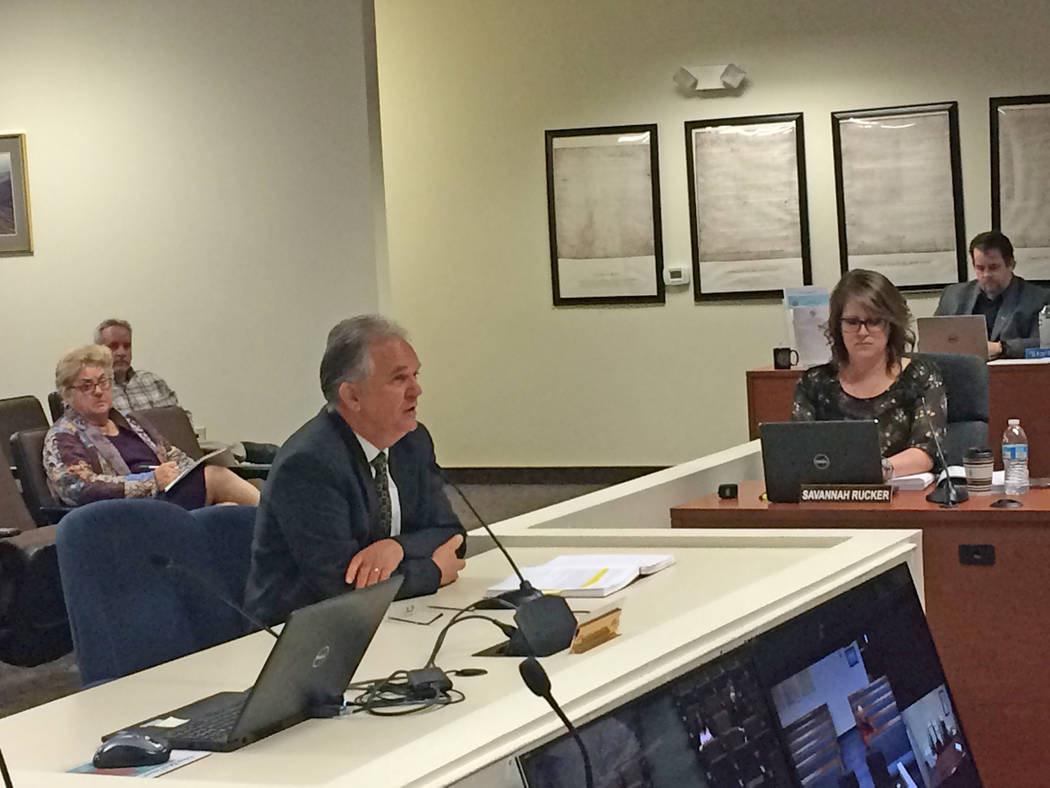 Nye County’s audit for fiscal year 2018 was presented on Feb. 12, with independent auditor Dan McArthur explaining that though there were a few findings in the audit, the county’s overall financial position appears strong.

Two areas that will need corrective action plans, he said, include the sheriff’s office, which was once again shown to be over budget, and the treasurer’s office, which has a slew of operational problems that need to be addressed.

As with any financial audit, findings of over-expenditures are a concern.

For fiscal year 2018, which ended June 30, 2018, McArthur said there were several examples of spending in excess of budgets but in many cases, those did not constitute a violation. Line items within a budget can be overspent, McArthur explained, so long as the overall budget allocation for that fund has not been exceeded.

“There were four areas where there were expenditures in excess of budget,” McArthur continued. “Three of the four areas are not deemed a technical violation of the law because they were expenditures that were mandated by law.” The three areas of over-expenditure were caused by intergovernmental payments, where the county was mandated to send money to other local governments, by law, he said.

The one governmental function that did amount to a violation for overspending was that of public safety.

The public safety budget was originally budgeted at just over $13.4 million and was later augmented to add almost $600,000 to bring the budget to slightly more than $14 million for fiscal year 2018. However, despite the augment to provide more money to that function, there was still an over-expenditure showing.

This was something that caught the attention and ire of Nye County Commissioner Leo Blundo, who questioned McArthur as to what the county could do to curb this continual problem.

McArthur replied that Nevada Revised Statute provides that if an officer of a local government willfully overspends, they can be subject to removal, which was one remedy he was aware of.

“I’d like to get that meeting set up and I’d like to be a part of that. I’d like to hear what the sheriff has to say and I think the public deserves to know what is going on,” Blundo said, noting that he understands that public safety is extremely important but at the same time, “When you go over and over and over, it’s not a piggy bank. You don’t just keep coming back for more.”

The Nye County Treasurer’s Office was another are of primary concern, with McArthur honing in on the recommendations he made to correct the issues.

“When we went through that audit process, we did find some reconciling problems. I want to make it clear though that we didn’t find missing money,” McArthur said of the office. “All we found was, I’ll use the term ‘bookkeeping errors,’ where amounts on the bank statement didn’t agree with amounts on the general ledger. Those items have been corrected and fixed.” McArthur stressed that ensuring these kind of mistakes are not repeated is imperative, as those mistakes can cause misleading financial statements that can in turn lead to the commission making decisions based on erroneous information.

“We believe there should be two individuals trained in that office, not one. In the past, there was just one individual who knew how to do it. We believe that you should have procedures implemented that mandate the preparation of bank statements on a monthly basis and this is also a Nevada Revised Statute requirement. We believe that the comptroller should get a copy of the bank statement reconciliation by the 25th of the month… so there are two set of eyes looking at the bank reconciliation,” McArthur stated. “It’s very important that more than one person knows how to do this bank reconciliation… as well as other functions within that office, and that frankly goes for every office in the county.”

McArthur also touched on an area of contention in recent months, that of money collected from the marijuana industry.

For more than a year, Amargosa resident John Bosta has been attempting to convince the county that taxes from the marijuana industry collected within unincorporated towns must go to those towns, not to the county.

However, the county has been placing this money in its general fund but that money has not been spent, having been placed into a restricted fund within the general fund that is labeled specifically for unincorporated towns.

“Under the restricted section there is a line item entitled ‘unincorporated towns’ which shows a balance of $788,182… This relates to marijuana money,” McArthur said. “There has been some discussion about whether the marijuana money belongs to the county or to the unincorporated towns. Based on legal documents that I have presently seen, it indicates in an opinion from, I believe, the Legislative Counsel Bureau, that money belongs to the unincorporated towns. That money currently sits in the (county) general fund, it hasn’t been spent, it shows as restricted, following the LCB opinion concerning that.”

McArthur also remarked that this could change, stating, “I have had conversations with the Nevada Department of Taxation, I have been told there may be new guidelines that come out that will change that and indicate that money will most likely be the county’s money.”

McArthur also took the time to discuss the county’s liabilities in relation to both the Public Employee Retirement System and other post-employment benefits, which provides health care coverage to former county employees.

McArthur said that PERS liabilities were showing at $52 million but this was not an issue as the county makes its payments toward the Public Employee Retirement System on a monthly basis. This is not the case for other post-employment benefits, however, which are not pre-funded and represents an enormous liability of $65 million.

McArthur explained that roughly five or six years ago, liabilities from the health coverage program were not documented on any governmental entity audits but law changes made inclusion of those figures mandatory.

Additionally, “The rules on how OPEB liabilities were calculated were changed… and that change is reflected inside this financial statement. With the new change, it added about $45 million of additional liability to the books of the county, that hadn’t existed prior to this change. That is because of the method under which the calculation is made.”

The county is currently working to draft a plan to help control this liability in the future.

Overall, McArthur said the county appears to be in a healthy position fiscally. He called attention to the combined balance sheet showing assets, liabilities and fund balance of major funds and other governmental funds. Under the county general fund, it showed an ending fund balance for fiscal year 2018 of $10.1 million.

“That puts the count in a strong financial position from where they have been in prior years. That is a good ending fund balance and when I look at all of the other funds, I want to say that the county is in good financial condition as we sit here right now,” McArthur said.

“This is excellent work, glad to get it done,” Nye County Commissioner Debra Strickland stated as the item came to a close. Commission chairman John Koenig agreed, stating that McArthur seemed happy and he himself was too.

To review the entire 318-page audit report visit www.nyecounty.net and click on “meeting center,” then select the Feb. 12 county commission meeting agenda. The information is contained within the agenda item addressing the county’s audit.