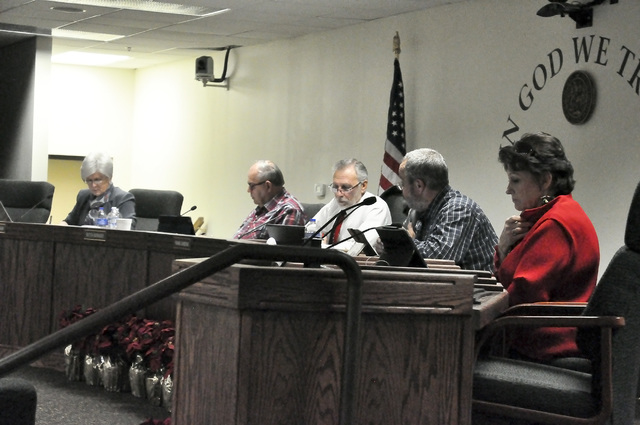 County Comptroller Savannah Rucker said the funds that were augmented spent less than what they had been budgeted for in the fiscal year 2016, and due to underspending, the county was able to increase their expenditure budgets in fiscal year 2017.

“These resolutions are taking the auditor’s final audit for fiscal (year) 2016 and updating the beginning fund balances for these funds,” Rucker said.

The revenue from private property taxes is paid into more than 20 funds, including each of Nye County’s town general funds.

“We budget conservatively when we prepare the budgets for the next fiscal year, we don’t have ending fund balances for the current year, when we prepare the next year’s budget. We don’t get that until the audit report,” County Manager Pam Webster said. “So, this audit report then reflects those final numbers and because they were not included in the budget, this augmentation projects that forward to increase the budget, if necessary.”

Rucker said $3 million came for augmentation. Among the funds that will be augmented are Nye County Museum, Agricultural Extension, State and County Tax, and the towns of Pahrump, Gabbs and Manhattan.

The augmentations are based on each’s funds ending fund balance of the fiscal year 2016 audit, Rucker said.

“For example, Pahrump General Fund was underspent by $1.576 million, and when the augment is processed that increased expenditure augment belongs to that specific fund,” Rucker said. “These are not distributions; there is no sharing of ending fund balance between funds, this is cleanup from underspending in each respective fund from the previous fiscal year based on the final audit.”

Total resources of the Nye County Agricultural Extension were budgeted to be $0 on July 1, 2016, which makes the total available resources to be $68,306, according to the documents.

Pahrump town had the largest augmentation at $1.5 million because it underspent their expenditure budget by $1.5 million. The primary underspending within this fund came from the services and supplies budget, and capital improvement budgets, Rucker said.