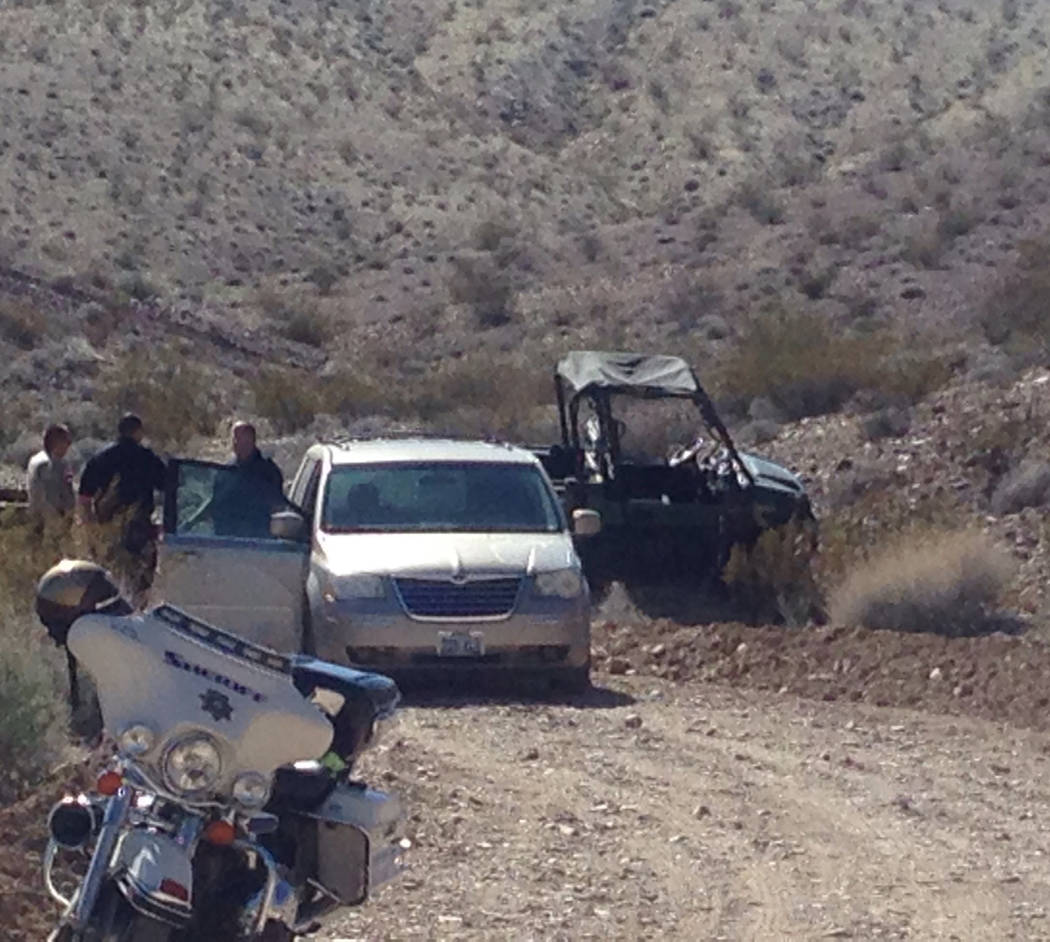 Special to the Pahrump Valley Times A couple walking their dogs in the desert off of Charleston Park Avenue and Warren Street discovered the body of a man in an overturned off-road vehicle on Thursday morning Feb. 28. The man has been identified as Joe Verholtz, 58, of Pahrump. The cause of the fatal crash is under investigation by Nye County Sheriff's deputies.

A Pahrump couple walking their dogs out in the desert wandered upon the scene of off-road crash that killed a Pahrump man.

Roxanne Dann said she and her husband, Greg, were in the desert area off of Charleston Park Avenue and Warren Street on Thursday morning, Feb. 28, when she came upon the startling discovery.

“We started up the hill at around 10 in the morning,” Dann said. “I came around a corner and I said ‘what’s this?’ Because it wasn’t there the previous day. I saw the man’s leg sticking out of the vehicle, and I told my husband that I think there’s a dead person in the vehicle. My husband peeked his head inside the vehicle and asked if he was OK, but there was no answer. You could see that the guy was deceased. At that point I called 911.”

While at the scene, Dann took several photos of the overturned off-road vehicle.

Upon returning to her home, Dann said she felt compelled to post her experience on the Local Pahrump Facebook page.

As a result, the deceased man’s family reached out and contacted her.

“I found out who he was on social media,” Dann said. “I spoke to his mother, who lives in Apache Junction, Arizona. His mother told me that his name was Joe Verholtz and he was 58-years-old. She reached out to me and thanked me for the information because she had a hard time getting anything from the sheriff’s office here.”

“She pleaded with me to send her all of the pictures that we took,” Dann said. “I asked her if she wanted pictures of her son’s deceased body and she said yes, because she had to know. She was grateful, and she told me that I made things much more easy for her because it gave her some closure, and she no longer had any questions in her mind that were haunting her. I just wanted to know everything I could about this man. I was supposed to meet with them because they wanted to go up to the site, but then they decided not to.

“From time to time you hear about people finding dead bodies out in the desert. It was just kind of freaky to find a dead body where you don’t expect one.”

Dann also said she just wanted to find out who the deceased man was.

“When you find a dead body, you ask yourself what’s this person’s story?” she said. “I learned that he was a retired ironworker, and he moved to Pahrump from Apache Junction, Arizona where his 80-year-old mother lives.”

The Nye County Sheriff’s Office is investigating what caused the fatal crash.