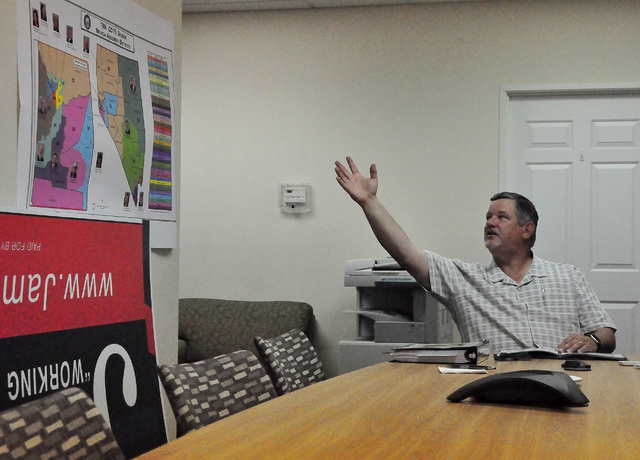 State Assemblyman James Oscarson is flexing his fundraising strength to fend off a primary challenge within his own Republican Party.

According to campaign finance reports released on May 24, incumbent District 36 Assemblyman Oscarson has raised $134,434 since Jan. 1, one of the largest amounts for a state race raised in Nevada.

Oscarson is one of many incumbent Republican lawmakers in Nevada receiving in-party challenges for supporting a $1.5 billion package of new and old taxes during the last session. However, the backlash from the vote doesn’t appear to be hurting his funding.

The report shows Oscarson’s in-kind contributions are $15,592. His monetary contributions in excess of $100 are $118,004. The Oscarson campaign reported an $837 total amount for all contributions of $100 or less.

Oscarson also got several donations from the gaming industry.

Additionally, the Nevada Mining Association donated $1,000 to the Oscarson campaign.

Among in-kind contributions to the Oscarson campaign are billboards from Tim Hafen and Wulfenstein Construction. Pahrump Party Supplies made over $3,000 in separate contributions to his campaign.

Oscarson’s expenses totaled $105,524 and show he spent heavily on advertising. He paid close to $49,000 to November Inc., a Las Vegas political consulting firm.

Trenner, who has received the backing of the Nye County Republican Central Committee, has received two $2,500 donations from private citizens in Las Vegas to lead her campaign efforts.

The race for three county commission seats also revealed some wide differences in fundraising and spending.

District III incumbent commissioner Donna Cox, who is running for re-election, disclosed $12,800 in total contributions. Her reported expenses are $9,805. In a disclosure statement provided to the Pahrump Valley Times, Cox listed $4,500 in in-kind contributions. Her top donors are Las Vegas Attorney Neil Beller, who gave $1,000 to her campaign and Dr. Jeffrey Gunter, who donated $1,500.

Pahrump businessman Leo Blundo, who’s also running for the District III seat reported $4,250 in contributions. The biggest chunk of the money, $2,000, was loaned to the campaign by Blundo’s business, Carmelo’s Bistro. Saitta Trudeau-Chrysler Jeep Dodge in Pahrump contributed $750 to the Blundo campaign. Blundo’s expenses were $2,457, according to the report.

Antheny “AJ” Dodd spent $62,500 at Valley Signs in Pahrump, according to the records but reported only $500 in raised money. Louie DeCanio reported $100 in contributions and $1,746 in expenses.

Nye County Commission District II candidate John Koenig raised $8,150 and spent $5,429, records show. Koenig received $1,000 each from Area 51 Fireworks and Creekside Investment. He also loaned $2,500 to his campaign, according to the records. Koenig listed $5,429 in expenses.

In District I, incumbent commissioner Lorinda Wichman raised $7,500 and spent $6,381. Her largest donation was $2,500 from SolarReserve, which operates a large field outside of Tonopah.

Another District I candidate, Earl Jones, had yet to file a campaign expense report by deadline.