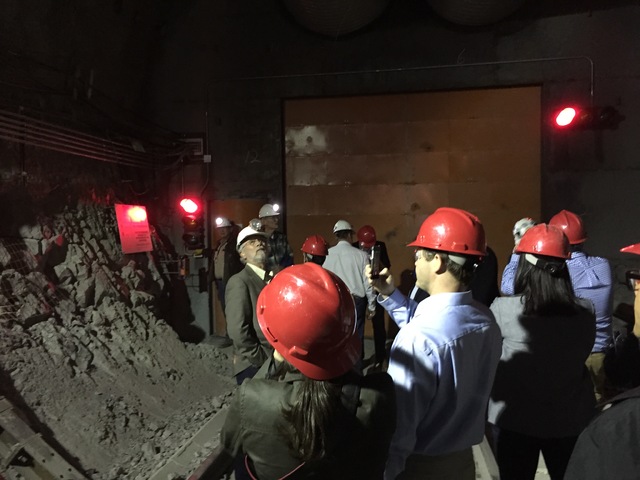 Speaking at the National Press Club, Moniz said congressional mandates in the 1980s that the Department of Energy develop Yucca Mountain as a storage site curbed research, development and the selection of other locations to store waste generated by nuclear reactors.

“It’s a lot easier to stop something,” than to start something, Moniz said.

Speaking to reporters following the speech, Moniz said: “We believe a consent-based approach is the only way to get across the finish line.”

Meanwhile, Nevada’s congressional delegation filed legislation on Wednesday that would require the Energy Department to secure consent from a governor, local governments and Native American tribal leaders to authorize construction of a repository in any state.

“It’s time for the federal government to admit what Nevadans already know: Yucca Mountain does not have a path forward,” Heller said in a statement.

Heller said that for decades “billions of dollars were wasted by bureaucrats in Washington in an attempt to force an ill-conceived move of this nuclear waste to Nevada.”

Companion legislation was filed in the House by U.S. Reps. Dina Titus, Ruben Kihuen and Jacky Rosen, all Nevada Democrats.

“No state or community should have a nuclear waste dump forced upon them,” Titus said in a statement.

She said the bipartisan, bicameral legislation would give a “voice to those most affected while creating a process to address the nation’s nuclear waste concerns.”

Kihuen, whose congressional district includes Yucca Mountain and Nye County, said the site “isn’t a dumping ground for the rest of the country’s nuclear waste, especially when the health and safety of my constituents is at risk.”

“We will not allow dangerous proposals that threaten the health and safety of Nevadans to go forward,” Cortez Masto said.

Experts say the cost to redevelop the site and prepare for underground disposal of nuclear wastes would cost in excess of $30 billion. Under a federal law passed in 1987, the Nye County site remains designated as the permanent repository for the waste.

Yucca Mountain is located about 90 miles north of Las Vegas, the most populous city in the state and a world destination for entertainment and gaming.

Last year, the American Gaming Association sent a memo to President-elect Donald Trump stating its concern over attempts by a new administration to revive Yucca Mountain.

“Any problems with the transport of nuclear waste to the site, or issues with its storage there, would bring potentially devastating consequences to the world’s premier tourist destination and the industry, which all Nevadans rely on in one way or another,” the memo stated.

But political pressure is building to store 84,250 tons of spent fuel assemblies from commercial reactors, and politicians in states with reactors that generate the waste are seeking a place for storage.

Trump has tapped former Texas Gov. Rick Perry to succeed Moniz at the Department of Energy. A Senate confirmation hearing for Perry’s nomination could happen next week.

Perry would be instrumental in the decision-making process of nuclear waste disposal in the next administration. As governor, Perry backed a plan to store wastes from reactors in Texas at a facility in his own state.

Waste Control Specialists LLC of Texas has a license application pending before the Nuclear Regulatory Commission to establish an interim storage site in Andrews County, north of Odessa.

Moniz said he has talked to Perry about issues at the Department of Energy, but declined to speak on the specifics of their conversation.

“Any new secretary is going to have new priorities,” Moniz said, following his speech on the importance of maintaining scientific integrity at the Energy Department laboratories.

Moniz spoke to the National Press Club about ongoing efforts by the United States to advance energy, environmental and nuclear security, as well as the importance of scientific research at laboratories.

The Energy Department oversees 64 sites across 29 states and the District of Columbia, including 17 National Laboratories.

During the eight years of the Obama administration, Moniz said the Energy Department has seen dramatic growth in clean energy jobs, progress on securing and diminishing the amount of nuclear material globally and significant scientific and technological discoveries.