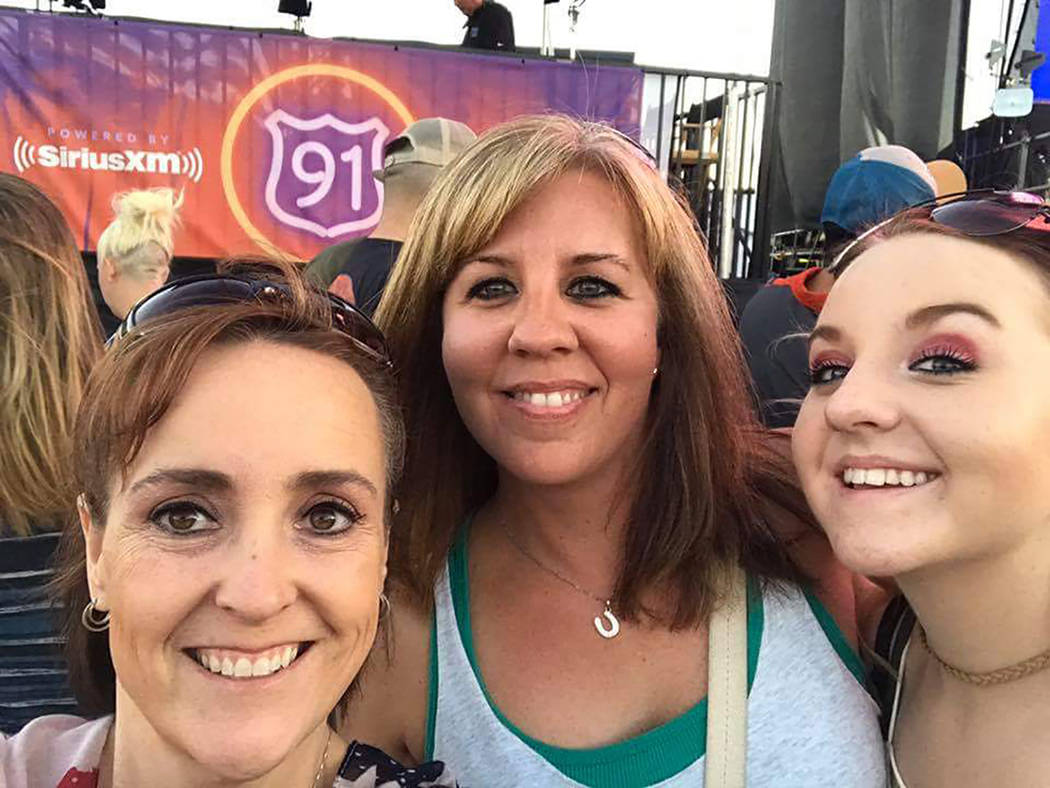 Special to the Pahrump Valley Times Pahrump resident Denise Koch, center, takes part in a selfie at the Route 91 Country Music Festival last year. Koch is join by her daughter Breana, at right, and close friend Cheryl Davis. Not long after this photo was taken, shots rang out from the 32nd floor of the Mandalay Bay Hotel, killing 58 and injuring more than 800 others. 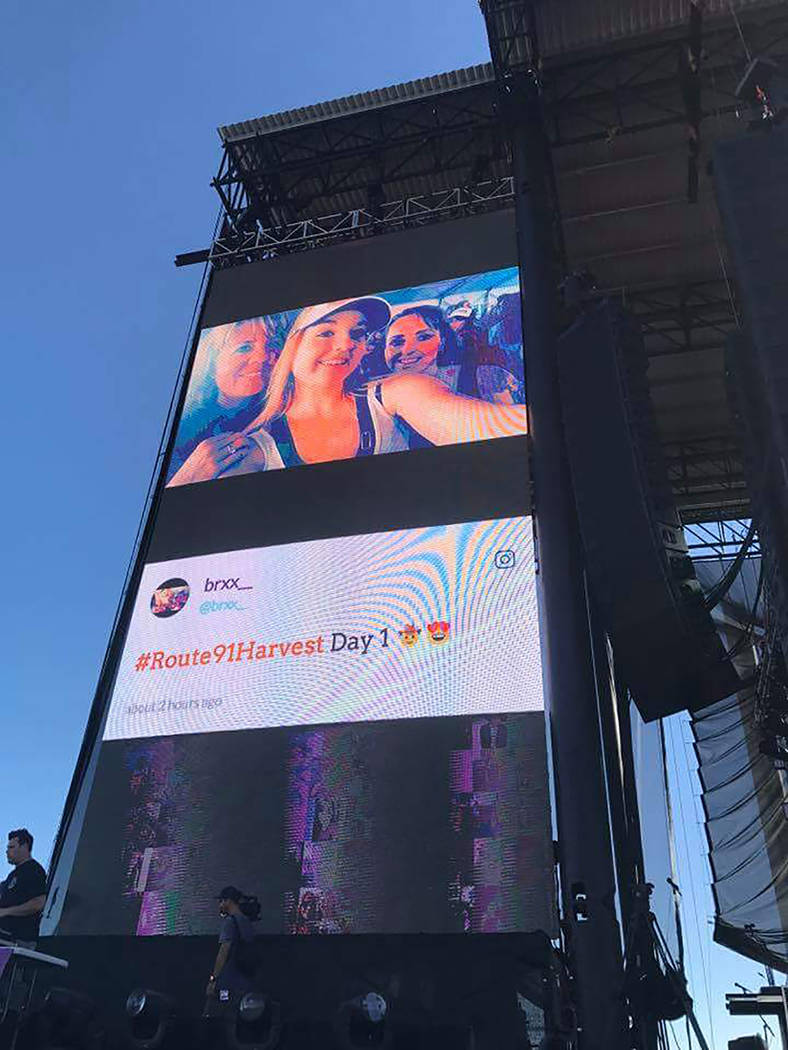 Special to the Pahrump Valley Times Denise Koch, left, daughter Breana, center a friend Cheryl Davis managed to get their images on the big screen at the Route 91 event last year. Koch said she took in a local support group formed in the aftermath of the shooting to help those who were emotionally affected by the tragedy. 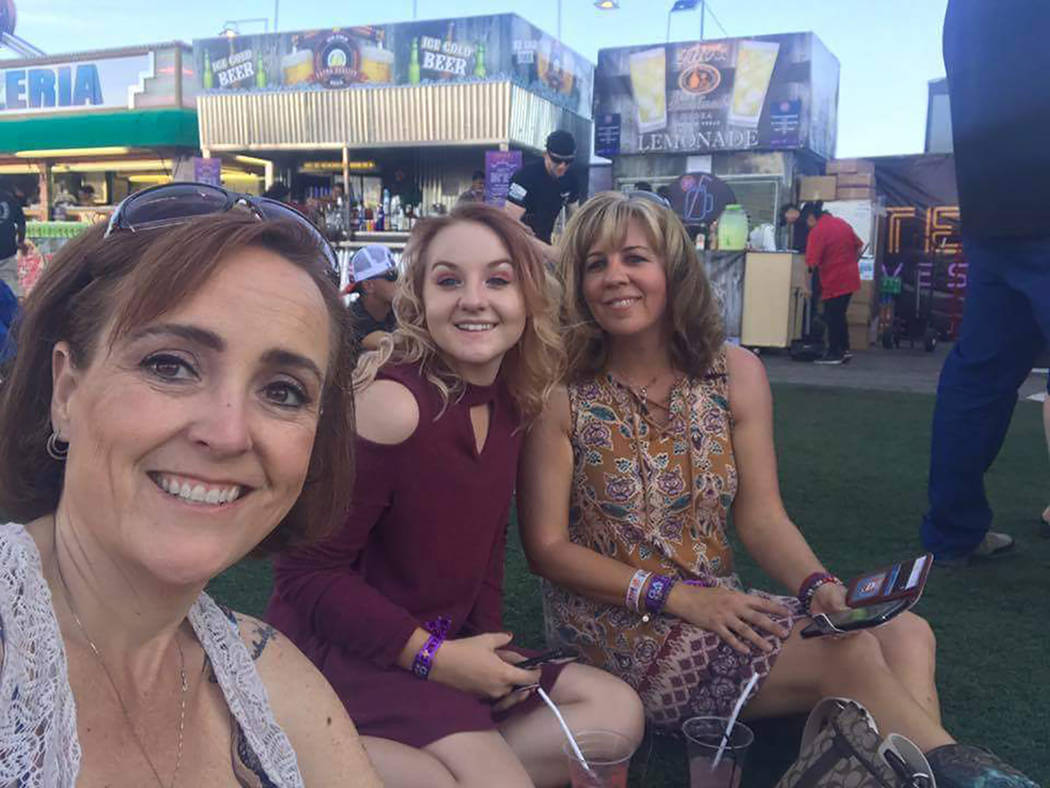 Special to the Pahrump Valley Times Denise Koch, far right, poses with her daughter Breana, center, and friend Cheryl Davis just prior to the start of the Route 91 concert. As a result of last year's the experience, Koch said she is now much more aware of her surroundings when going out. “When we go to the movies or the mall, the first thing that we do is plan where we are going to go if something bad happens,” she said. 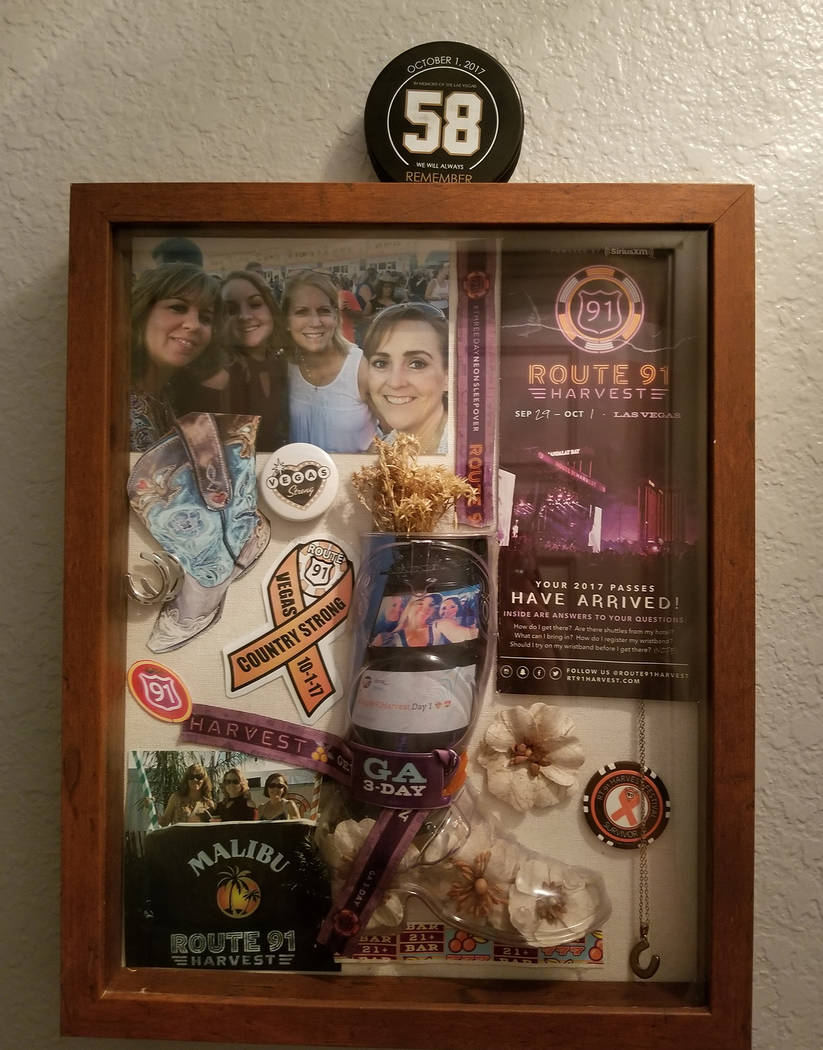 Special to the Pahrump Valley Times Denise Koch assembled a shrine in her home comprised of Route 91 concert tickets, photographs and additional items of remembrances from the event. Koch, along with many other attendees at the concert got a tattoo to permanently memorialize the 1 October tragedy. 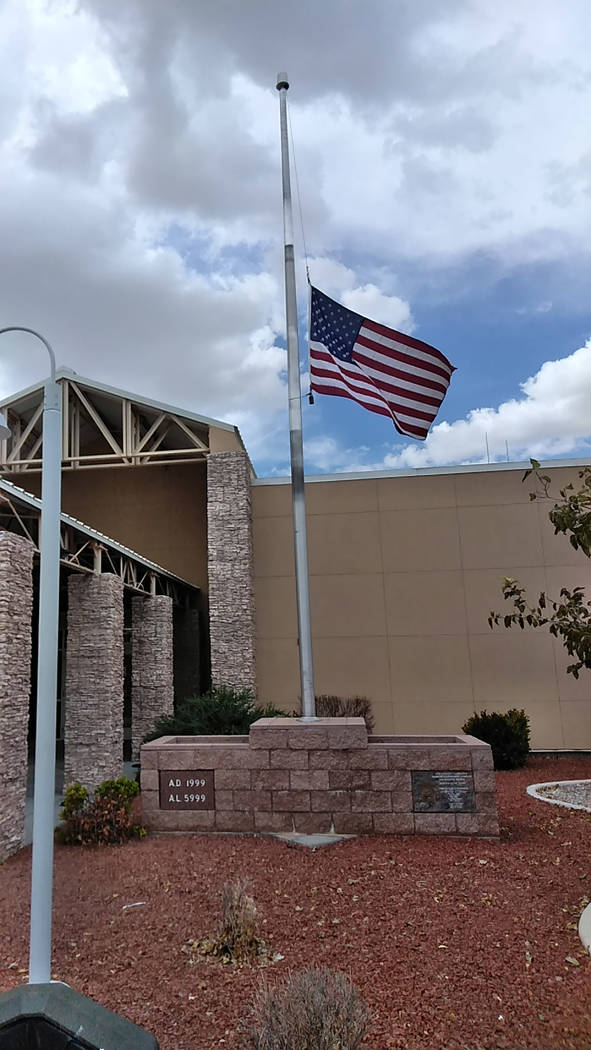 Selwyn Harris/Pahrump Valley Times The American flag is shown flying at half-staff on Monday in Pahrump outside the Nye County courthouse off Basin Avenue. The half-staff order throughout Nevada was issued by Gov. Brian Sandoval to remember the victims of the Oct. 1, 2017 Las Vegas shooting.

While flags flew at half-staff on Monday, as decreed by Nevada Gov. Brian Sandoval, Pahrump resident Denise Koch is reflecting this week on the 1 October mass shooting during the 2017 Route 91 music festival on the grounds of the Mandalay Bay resort.

The mass shooting, perpetrated by Stephen Paddock, according to authorities, was the worst mass shooting in modern U.S. history, killing 58 people and injuring more than 800 others.

Koch was at the popular event with her 15-year-old daughter Breana along with close friend and former Pahrump resident, Cheryl Davis.

It was their first such time attending the annual concert.

Country music star Jason Aldean was on stage performing when Paddock began firing from the 32nd floor of the resort.

Koch said she and the other the concert-goers initially mistook the gunfire for fireworks.

“We actually just stood there, if you can believe that,” she said. “For the longest time, we were just standing there waiting to see the sparks and colors of the fireworks. When the second round of shots started again, we were just asking ourselves what is that. Nobody really knew what it was. At the time, you just weren’t aware of the magnitude of what was happening. Then all of a sudden, people started running and saying that they are shooting, they are shooting. We were all in shock at that moment and I think I went into my protective mommy mode because my daughter was panicking.”

During the ensuing chaos and pandemonium, Koch said she thanked God that she was able to find some family members at the concert, who happened to be Henderson Police officers.

“They were actually off duty and they were there to enjoy the concert, but they immediately went into protect mode, and they surrounded us,” she recalled. “They moved us very safely and quickly against some concrete barriers. They were trying to shield us from the gunfire. Everywhere on the concert grounds, you could see people who were wounded and injured.”

After the gunfire stopped, Koch and her daughter were searching for her sister-in-law’s son, who happened to be working at a medical tent near the concert grounds.

“When we walked into that medical tent, that’s when the reality of what was happening just hit us, because there were bodies everywhere. It was something I have never seen before in my life. That’s how I picture what war must look like. It was just crazy. One of my sister-in-law’s friends had a daughter who was hit in the back as she was climbing over one of the fences, trying to get out. My sister-in-law’s daughter-in-law had a family friend from Henderson who was killed. It was just horrible.”

Koch went on to recall witnessing more wounded individuals while she and her daughter were walking away from the grounds.

“We walked forever away from the Mandalay Bay and we could see wounded people laying on the sidewalks in front of other hotels,” she said. “We could see their friends trying to help them, while they were calling for ambulances. I know my sister-in-law and her husband stopped several times to see if they could provide any kind of help to those who were injured. It was just crazy.”

Roughly one year after the tragedy, Koch said she and her daughter seem to be doing much better.

Additionally, Koch said she was also part of a support group formed in the aftermath of the shooting to help those who were emotionally affected by the tragedy.

“Local news personality Deanna O’Donnell helped me to reach out to the Peaceful Minds organization here,” she said. “I connected with a doctor there who helped us set up a support group. For the first couple of months after the shooting, we all attended the support group, and it was very helpful. The doctor did it completely free of charge. We also made some connections with other survivors.”

On the issue of the term “survivors,” Koch said she’s not very comfortable with the word.

“That’s because so many people lost their lives, but it was good to be able to share our experience with other people who were there and provide emotional support to each other. The whole event has made me look at life much differently now. It was really an eye-opener for me. I don’t take any day for granted, because at any time, it could be your last day.”

As a result of the experience, Koch said she is now much more aware of her surroundings when going out.

“When we go to the movies or the mall, the first thing that we do is plan where we are going to go if something bad happens,” she said. “We actually plan what we are going to do and how we are going to get out if someone opens fire. Not too long ago, my husband and I went to see Def Leppard at the T-Mobile Arena. Breana for a while did not even like going outside. She said she just felt too exposed.”

Though Koch said she would not attend any of the 1 October memorial observances in Las Vegas on Monday, she did, however, participate in a recent weekend event.

“On Sunday we went to the Vegas Strong 5K and we also did it last year shortly after the tragedy,” she said. I had about 15 family members and friends who joined Breana and me to support that. On Monday, Las Vegas is not a place that we want to visit.”

As a symbol to the memory of the 58 people who lost their lives, Koch is one of many individuals who decided to memorialize 1 October by way of a permanent gesture.

“We made some shadow boxes, and I actually went out and got a tattoo of a horseshoe in memory of the tragedy,” she said. “I was wearing a necklace that night shaped like a horseshoe that my daughter bought me. In some strange way, I feel like it brought us luck. It’s a horseshoe with a big sunflower in the middle of it and it has a Route 91 poker chip on it, which was kind of like the symbol for the concert.”

A sunrise remembrance service for the public was held at the Clark County Government Amphitheater on Monday morning to honor the victims.

Speakers at the service were Gov. Brian Sandoval, Sheriff Joe Lombardo, Clark County Commission Chairman Steve Sisolak and Mynda Smith, the sister of Neysa Tonks, one of the 58 who died in the October tragedy.

The remembrance included 58 seconds of silence, a multi-agency honor guard, music from the Academy Singers from the Las Vegas Academy of the Arts, and the release of 58 doves.