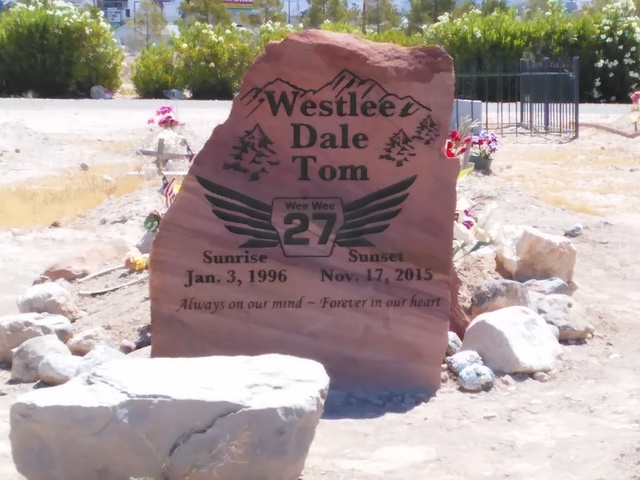 A Pahrump family is bewildered over what can best be described as a disgraceful act of larceny.

Karri Tom’s 19-year-old son, Westlee Dale Tom, was tragically killed after being struck by a vehicle while riding his bicycle along Homestead Road near Dandelion last November.

Westlee was laid to rest at Chief Tecopa Cemetery.

His family and friends visit his grave on a regular basis, occasionally leaving tokens of love and remembrance on his grave.

What remains there are angel figurines, dreamcatchers, stuffed animals and even a handwritten letter.

The headstone identifying Westlee is inscribed with the message “Always on Our Mind – Forever in Our Heart.”

Some of the items were toys that the young man played with as a child.

Just recently, Kerri said some of her son’s favorite toys, which are known as Tonka Toys, went mysteriously went missing from the gravesite.

She would like the person or persons who removed the toys to simply return them to her son’s final resting place – no questions asked.

“They were very sentimental to him and us,” she said. “They were old metal Tonka Toy trucks he got when he was little. They were the big ones. They were on there and they were taken, I’m guessing approximately one month ago. I was going to file a report with the sheriff’s office but I didn’t because I figured that there’s not much they could do.”

Tom’s said she thought reaching out to the media would be a better option, with the hope of someone coming forward with information if they saw something suspicious within the past month or so.

“We don’t want anybody to get in trouble or anything, but we would just like them to return them,” she said. “I have heard there were other items that have been taken from graves at the cemetery.”

Tom’s son was laid to rest in the Native American section of the cemetery a short distance behind the veteran’s section.

She said once she noticed her son’s toys were missing, she thought they may have been moved to another grave, for whatever reason.

She then canvassed other areas of the cemetery and found nothing.

“I think it’s very sick that somebody would do that,” she said. “Why would they take them? Why would anyone take anything from a grave for that matter? If they were in pristine condition, they would probably be worth a little money, but they were old and kind of bent up a little. It was just sickening, and my heart just dropped when I found out about this.”

Tom said the sentimental value of her son’s toys cannot be measured.

She simply wants them returned.

“Those were special toys that Westlee got when he was little and you can’t even buy the metal ones anymore,” she said. “If somebody knows anything, they can call me at 775-751-0565. It’s no questions asked or anything. I just hope the person who took them would return them to my son’s grave. It means a lot to my family.”

Town of Pahrump Buildings and Grounds Supervisor Matt Luis said thefts at the site are not an ongoing problem, but more of an issue officials have encountered from time to time.