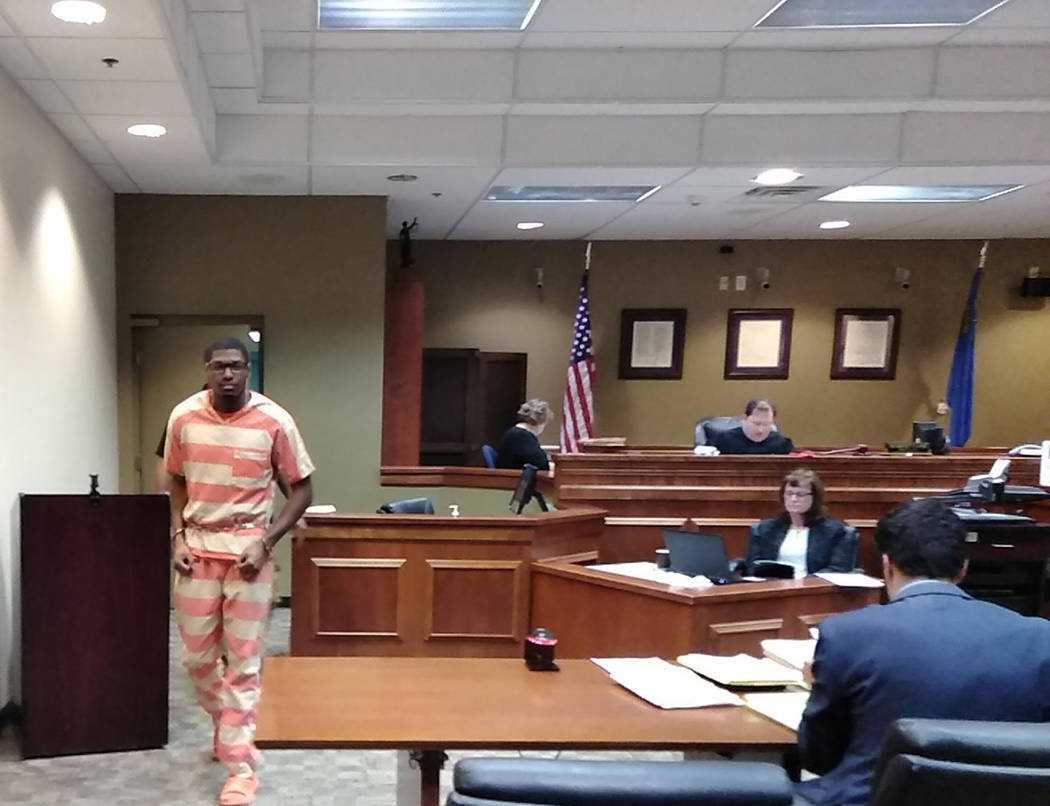 The Pahrump man initially arrested and charged with open murder and child abuse on his 6-month-old infant son last year, received the maximum sentence during a sentencing hearing on Monday, Dec. 17.

Mitchell Robinson was sentenced by Judge Robert Lane to eight to 20 years in prison, with 465 days credit for time served.

During an arraignment hearing back in September of this year, both prosecutors and defense attorney Daniel Martinez reached an agreement where Robinson pleaded guilty to child abuse causing substantial bodily harm.

The victim was Robinson’s 6-month-old son, according to the Nye County Sheriff’s Office.

“As you know, the attorneys all stipulated to the sentence and so did you, because this is such a horrible crime,” Lane told Robinson. “You’ve got child abuse causing substantial bodily harm. It was a pretty good negotiation that you got from the state and we’re going to follow everybody’s recommendation and give you the maximum sentence of 96 to 240 months in prison with standard fines and fees as set forth, and credit for time served, which is 465 days. There will be no restitution. Good luck, Mr. Robinson.”

“As it turned out, she was not the most culpable individual in this case,” Vieta-Kabell noted. “I think I even brought that up after hearing where I had to concede that we believe the co-defendant in the Ramsey case was the more culpable of the two, that being Mr. Mitchell Robinson.”

At least one of the stipulations for Ramsey to remain free on probation is to also remain drug and alcohol-free, Vieta-Kabell noted.

As stated in a Nye County Sheriff’s Office news release, the case was opened Sept. 4, 2017 when sheriff’s deputies and Pahrump Valley Fire and Rescue Services crews were dispatched to a residence on the 2000 block of West Simkins Road after receiving a 911 call that an infant had stopped breathing.

The release went on to state that medical examinations subsequently identified that the child’s death on Sept. 8 was the result of intentional abuse and head trauma.

During an interview by detectives on Sept. 9, 2017, Robinson admitted to shaking the baby “too hard,” the news release noted.

“He admitted to shaking the baby several times on the day the infant stopped breathing,” according to the release. “Robinson was placed in custody and booked in at the Nye County Detention Center.”

Additionally, it was discovered that the child had allegedly suffered a previous choking incident back in June of 2017.

Medical examinations, according to the news release, also indicated that there were previous rib fractures on the infant, which went untreated.