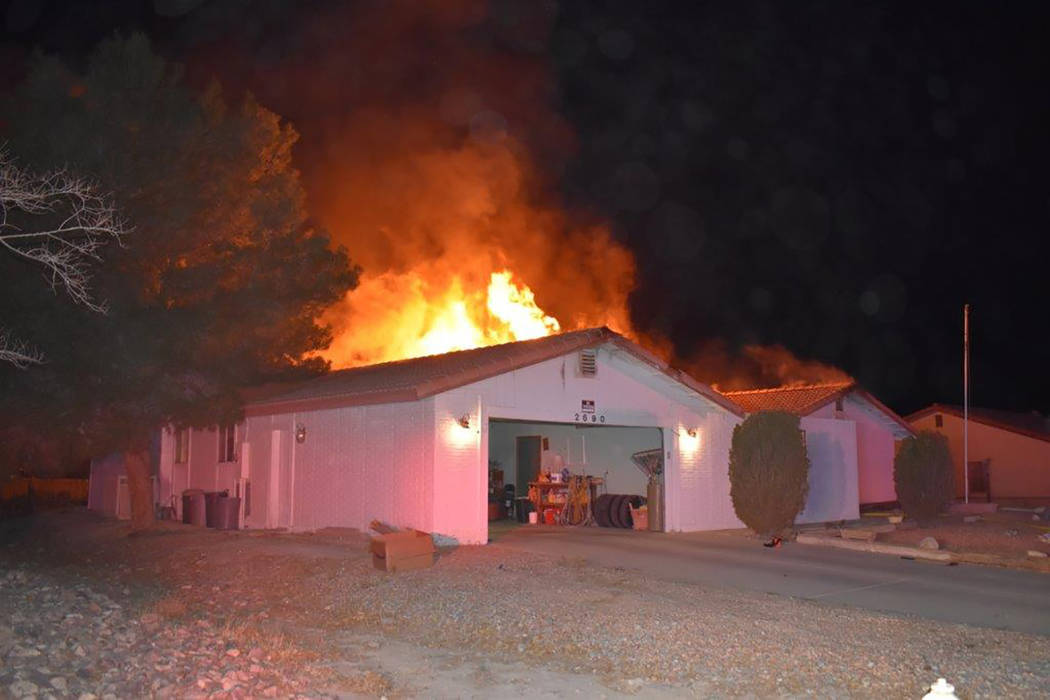 Special to the Pahrump Valley Times Pahrump Fire Chief Scott Lewis said fire crews responded multiple times to a structure fire along the 2600 block of South Dandelion Street on Monday evening January 1. Fire crews were again dispatched back to the Dandelion home throughout the overnight hours due to the insulation inside the home re-igniting. 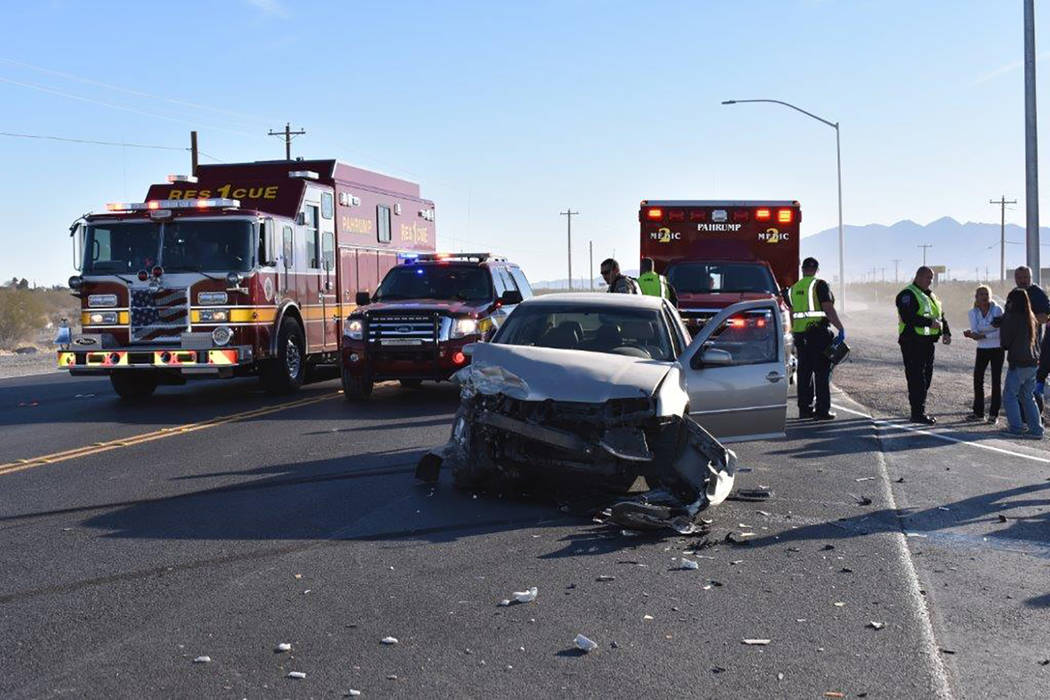 Special to the Pahrump Valley Times Pahrump fire crews were dispatched to a single-vehicle rollover crash along Bell Vista Road at Highway 160 on Wednesday morning December 27. The driver had self-extricated and sustained injuries that warranted a flight to UMC Trauma in Las Vegas. 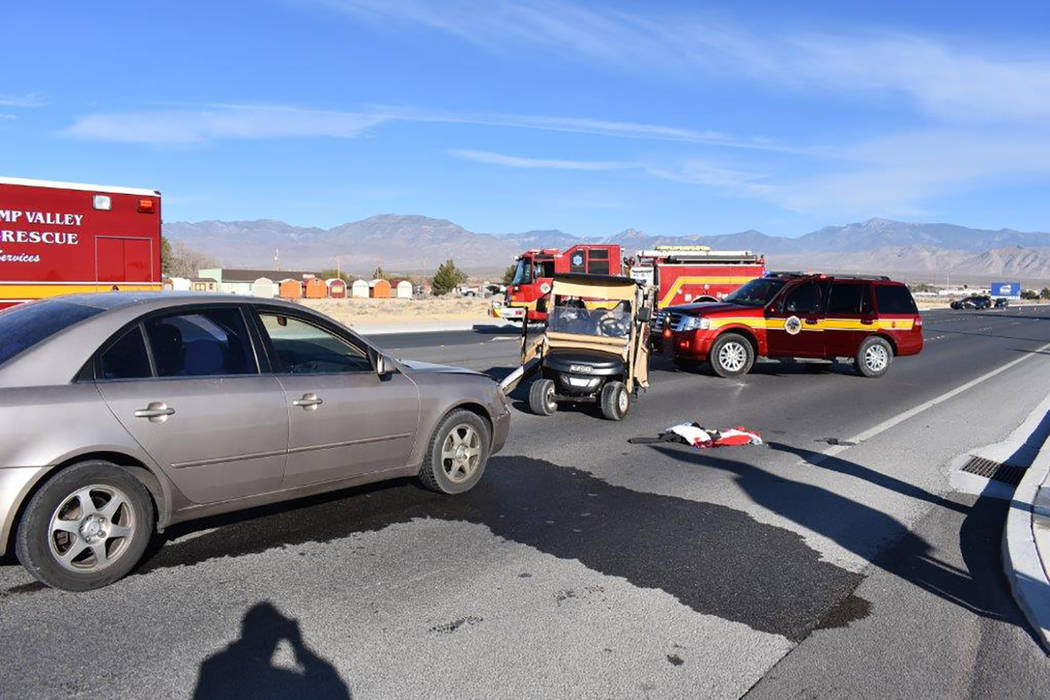 Special to the Pahrump Valley Times Local fire crews responded to a golf cart versus a motor vehicle collision on Highway 372 early Monday afternoon. The initial investigation revealed that upon impact, the driver of the golf cart had been thrown to the pavement sustaining a severe head injury. Mercy Air 21 landed on the highway where patient care was transferred to the air crews. The elderly patient was flown to UMC Trauma in Las Vegas. 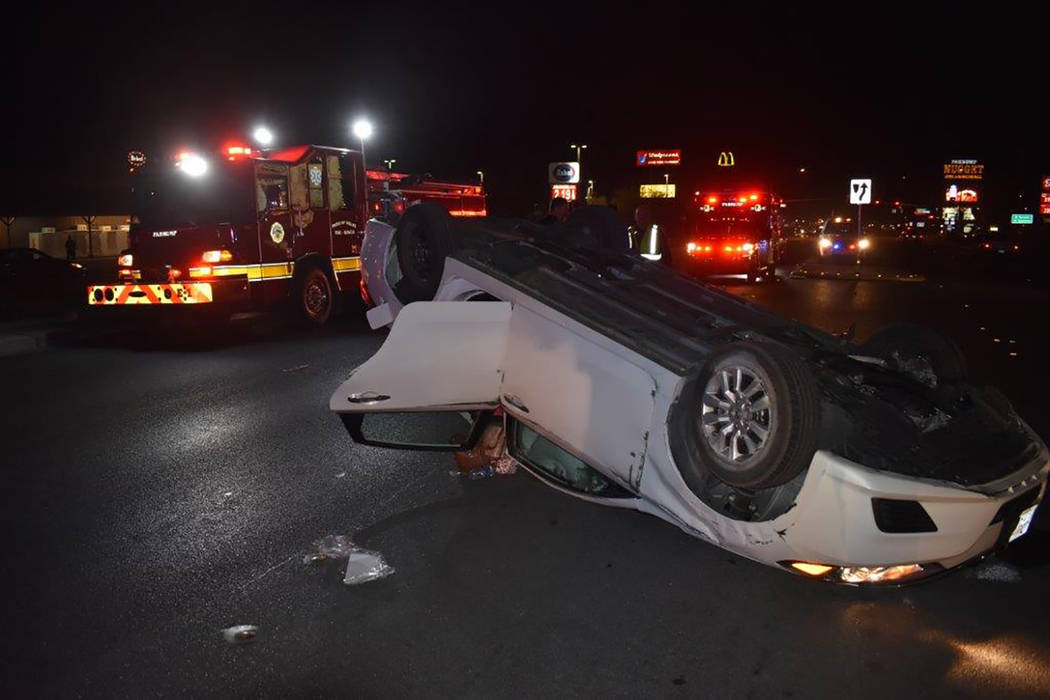 Special to the Pahrump Valley Times A total of four patients were transported to Desert View Hospital following a three-vehicle collision along the 700 block of Highway 160, just before 6 p.m. on Saturday. At least two occupants were briefly entrapped inside their vehicle, but were freed within minutes.

Pahrump firefighters were forced to return to a residence several different times on consecutive days to do battle with a stubborn structure fire this week.

Pahrump Valley Fire and Rescue Services Chief Scott Lewis said the initial dispatch occurred on Monday evening, Jan. 1, where fire crews were summoned to a home on the 2600 block of South Dandelion Street.

“Upon arrival, crews found pressurized, heavy smoke emanating from the eaves and gable vents,” Lewis said. “As crews were preparing to establish a water supply, fire broke through the roof of the structure. The scene size-up revealed an attic fire that had extended from one end of the structure to the other.”

Prior to fire crews engaging the blaze, Lewis said all occupants of the home were safely evacuated and accounted for.

Firefighters initially commenced an interior attack on the fire, but Lewis noted that they too were forced to exit the interior of the residence for their own safety.

“Within about 15 to 20 minutes, the roof and ceiling began collapsing,” he said. “The tile roof was actually coming down on the firefighters, so they knew it was time to evacuate for safety purposes. Once evacuated, the crews went into a defensive attack, where the main body of the fire was knocked down.

“They then re-entered the structure once it was deemed safe,” Lewis said. “The fire was brought under control with no extensions to nearby exposures. There were no injuries reported and the origin of the fire is thought to be accidental in nature.”

As Lewis noted, fire crews were again dispatched back to the Dandelion home multiple times throughout the overnight hours.

“That was due to the cellulose insulation, which has a tendency to retain heat and causes smoldering conditions,” Lewis said.

On Tuesday, firefighters returned to the home at 8 a.m., but there was no evidence of any smoldering materials.

Just over an hour later, however, crews found light smoke conditions after being redispatched to the residence.

“The very light smoke condition was coming from the attic-area insulation,” Lewis said. “Crews then responded by pulling out a section of the ceiling and extinguished the smoldering materials. There were no injuries reported.”

On Wednesday evening, fire crews were once again dispatched to the home after the residents owners detected the odor of smoke eminating throughout the dwelling.

Structure fires aside, this week, Lewis said fire crews had their collective hands full as they responded to numerous motor vehicle collisions throughout last week.

The 3:49 a.m., crash occurred roughly five miles outside of the heart of town.

“Upon arrival, we found a vehicle had rolled over several times and was off the roadway. The person had self-extricated and had sustained injuries that warranted flight. Mercy Air 21 was added to the assignment which flew to the Calvada Meadows Airport where they met up with Medic 5 and patient care was transferred. That patient was subsequently flown to UMC trauma in Las Vegas.

Also on Wednesday fire crews were dispatched to a T-bone type motor vehicle crash at Highway 160 and Bell Vista Road just after 2:30 p.m., where at least three patients were transported to Desert View Hospital with non-life-threatening injuries.

At roughly the same time, fire crews responded to another injury motor vehicle crash in the area of Linda and Irons Streets.

“That vehicle had flipped onto its side where the occupant driver was briefly entrapped, but was extricated in quick fashion,” Lewis said. “They were then transported to the local hospital.”

“Upon arrival, there were a total of three vehicles involved with one vehicle resting on its roof,” Lewis said. “Two patients were briefly entrapped and were extricated in quick fashion. A total of four patients were transported to the local hospital.”

The following evening, fire crews were summoned to what was initially reported as a structure fire on the 3800 block of West Horn Street, just before 11:30 p.m.

“Upon arrival, crews found not a structure fire, but a large brush fire with an immediate exposure, being a vacant single-wide manufactured dwelling,” Lewis said. “That fire was quickly controlled with no extension. It is thought to have been ignited by the use of fireworks preceding the midnight hour on New Year’s Eve.”

Lewis noted that crews also experienced numerous medical service calls along with several motor vehicle collisions throughout New Year’s Eve on Sunday, which continued into early Monday afternoon, where crews responded to a two-vehicle collision on Highway 372 at Xenia Avenue.

“It was initially dispatched as a report of a moped versus car,” Lewis said. “Upon arrival, crews actually found a golf cart versus a vehicle collision. The driver of the golf cart had been thrown to the pavement surface, sustaining a severe head injury.

“Mercy Air 21 was added to the assignment where it landed on Highway 372, and care was transferred to Mercy Air 21 where crews flew the patient to UMC Trauma in Las Vegas,” Lewis said. “It is my understanding that golf carts are not permitted on the highways here in town.”