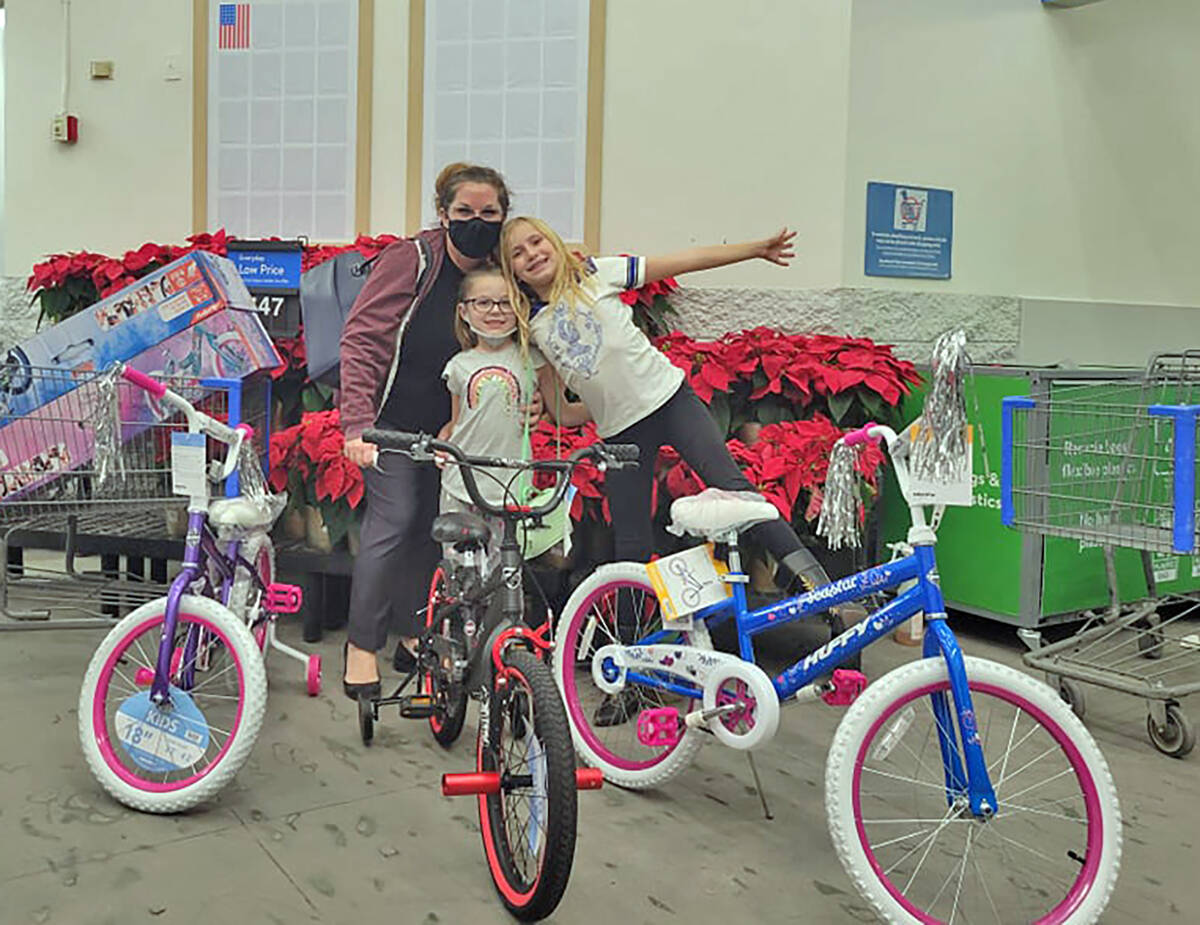 Special to the Pahrump Valley Times Avery Sampson needs the community's help to make her 2nd Annual Christmas Bikes for Kids effort a success. She has set a goal of 100 bikes this year and there are a variety of ways that people can donate to the cause. 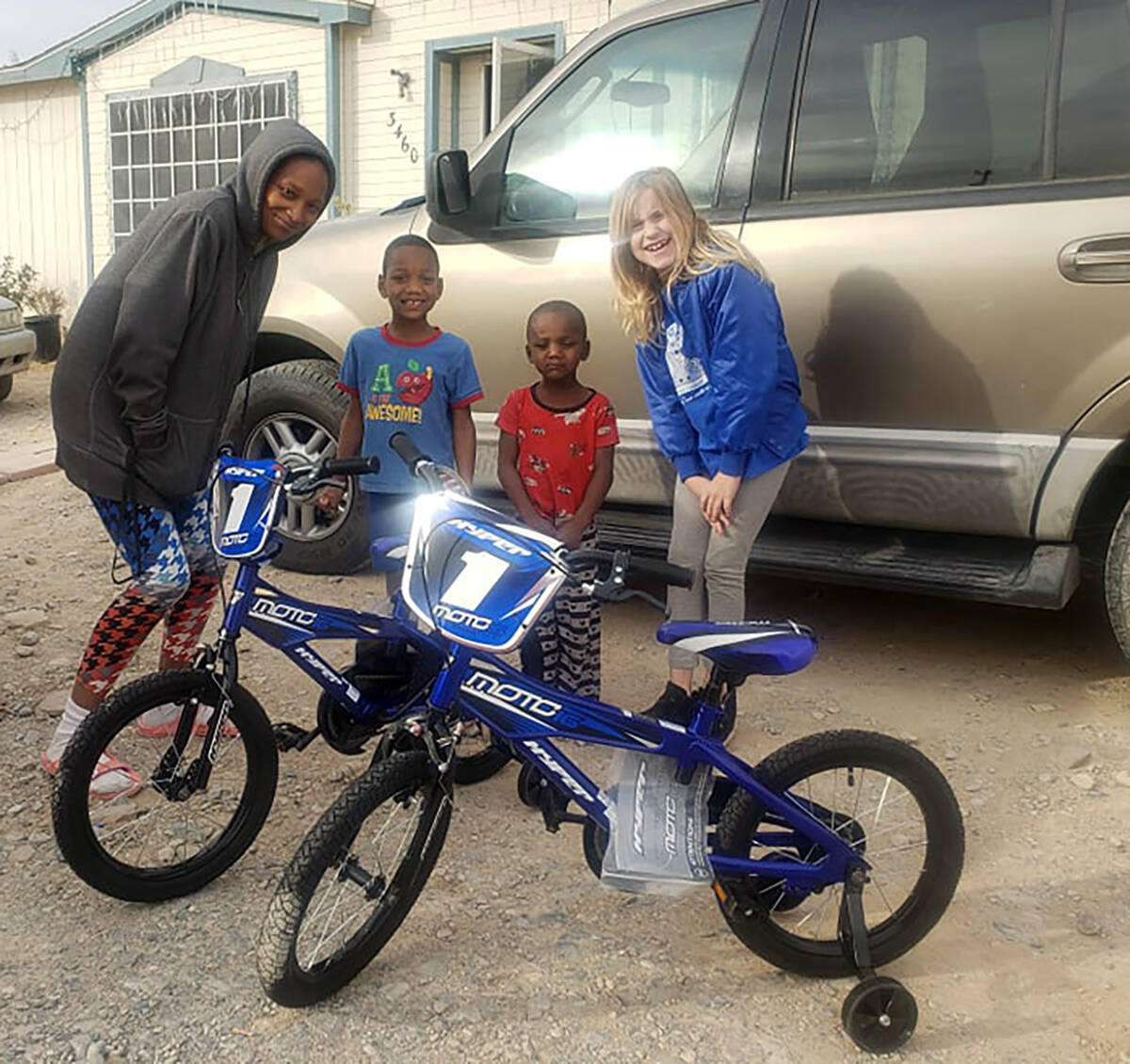 Special to the Pahrump Valley Times Avery Sampson is pictured posing with one of the families who received bicycles through her Christmas Bikes for Kids fundraiser. 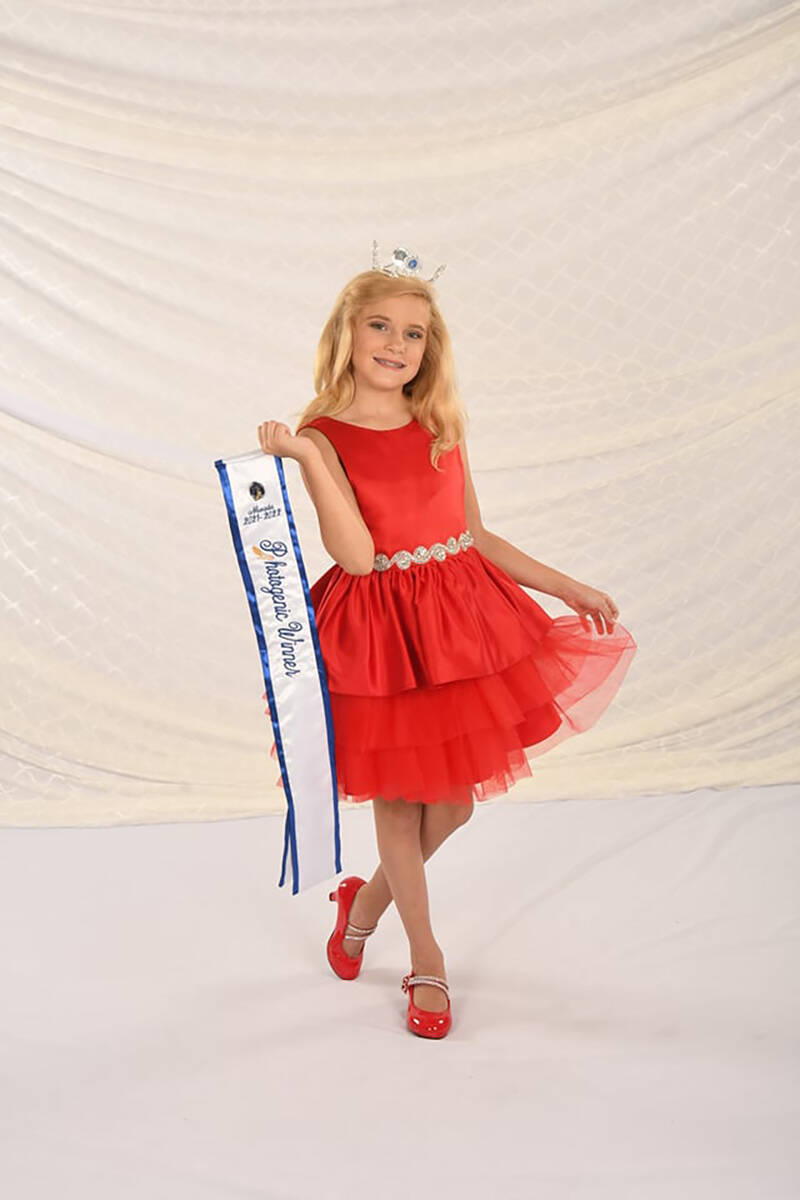 Special to the Pahrump Valley Times At the Cinderella State finals this year, Avery Sampson took home the title for most photogenic as well as the Silver Star award for her community service projects, which include her Christmas Bikes for Kids initiative.

This time of year, with Dec. 25 just two weeks away, children all around the world are contemplating their Christmas wishes and for many, they are hoping for the newest toy, some fashionable duds or the latest technological gadget or device. One local youngster, however, is harboring a Christmas wish that isn’t for herself, it’s for others.

Nine-year-old Avery Sampson wants to be able to spread holiday cheer to families across the Pahrump Valley this season by giving away bicycles to local children through her 2nd Annual Christmas Bikes for Kids fundraiser and donation drive.

The idea all got started last year when Sampson won the title of Miss Nevada Princess in the Cinderella state program and began to cast around for community projects to undertake in that capacity. With the pandemic creating such stress and tension in the community, Sampson decided she wanted to find a way to bring smiles to the faces of her fellow youth and, using her own love of bicycling as inspiration, she worked with her father, Scott Sampson, to create her very first fundraiser.

“Spending time with my family and being thankful for what I have is what makes Christmas special to me. That, and my Elf on the Shelf!” Avery told the Pahrump Valley Times, her humor shining through. “And I want other kids to feel special on Christmas Day. I think the best part of Christmas is giving to others.”

She set a modest goal in 2020 of just 15 bikes but once the community caught word of Avery’s endeavor, people from all walks of life stepped up to aid her on her way. Having far surpassed her original goal last year, collecting a total of 54 bikes along with a variety of other small items, Avery decided to go even bigger this year and she has set her 2021 goal at 100-plus bikes, but she cannot do it alone. She needs the community’s help to reach that objective and to date, she is much farther behind on the effort than she’d like to be, with Christmas just over a dozen days away.

“So far, donations have been sporadic,” Avery’s father, Scott, explained. “We have around 20 bikes and about 40 requests for bikes. We’re in most need of 20-inch bikes, for both boys and girls.”

Bike donations themselves are absolutely key but for those who don’t have the time to stop into a store to pick out a bike, monetary donations are just as effective.

In 2020, the Sampsons utilized a GoFundMe page to bring in cash donations and they have carried over that GoFundMe account to this year as well, but this is no longer the only way to make a donation. Scott set up a Venmo account to which people can transfer money and he and his daughter have also partnered with a local nonprofit to allow people to make tax-deductible donations.

“As a dad, I am just amazed by this girl all the time,” Scott continued. “Her sense of community and helping others is something she has always had. She was recently elected as student council vice president at Manse Elementary and in addition to her bike drive, she has been putting together backpacks with items for the homeless, which she plans on donating.”

Anyone willing to lend a hand to Avery in her effort to make Christmas a bit more cheerful for valley children can visit GoFundMe.com and search for “Avery’s 2nd Annual Christmas Bikes for Kids”, use the Venmo QR code included with this article or make out a tax-deductible check to the Kiwanis Club of the Pahrump Valley, P.O. Box 355, Pahrump, NV, 89041. For donations through Venmo or the Kiwanis, be sure to note they are for “Bikes for Kids.”

For more information or to arrange to make a donation in person email TheAveryProject2022@gmail.com.