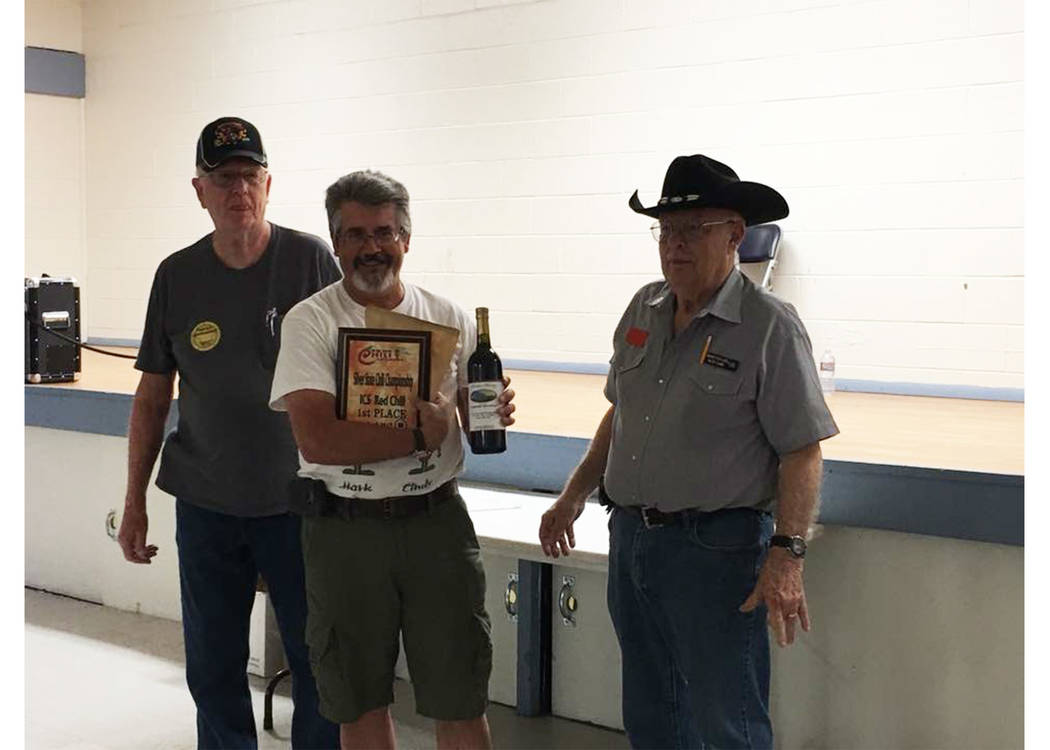 Haught triumphed over the competition and emerged as the winner of the International Chili Society’s (ICS), Silver State Chili Cook-off on Saturday in Petrack Park.

The ICS is the official organization that sanctions chili cook-offs.

Following his victory, Haught said he wasn’t very sure about how his team, “Haught Dawg Chili,” would fare.

Haught has competed in the cook-off for roughly 14 years, on and off.

“I wasn’t very confident because there were three world champions competing on Saturday and they are tough to beat,” he said. “We’ve had a few previous victories here and there. We attend about 10 or 15 chili cook-offs each year.

Additionally, Haught who recently retired from his job with Southwest Gas Corp. in Las Vegas, said he’ll use his winnings to pay off a few bills.

Concerning his recipe, Haught said he puts much love into his dish.

“It’s a real long cooking time so you’re have to use meat that would stand up,” he said. “You also have to remember that generally, the judges are just going to take one taste, so it’s got to be a little bit more intense than what you probably eat at home.”

The event is billed as a fundraiser for Pahrump’s No To Abuse agency.

Tastings in the thousands

“It was steady all day long, so it was hard to judge exactly how many visitors we actually had come through,” he said. “I do know that this year met last year’s numbers.”

Charles Harber made the trip from Corona, California.

He and his team, dubbed “On the Road Chili,” won the world championship for red chili last October in Reno.

Harber and company have competed in the ICS for the past seven years.

The team has competed in Pahrump for the past three years.

“Pahrump is a very nice area,” he said while stirring a large vat of chili. “We love it here and we love the weather. The people are really friendly and it’s an all-around great cook-off here. We really enjoy it.”

She and her husband traveled from Caldwell, Idaho to participate in Pahrump for their first time.

Both have earned several victories over the past 15 years.

“We have been getting a really good reaction from the attendees,” she said. “This is the first time we came to the Pahrump chili cook-off and I think it was well worth it. It was a one-day event but we prefer to do two days but it’s okay. We’ve won quite a few awards in the past.”

A total of 22 vendors also set up shop at Petrack Park during the event.

Though the hard numbers were not in by press time, Frazier estimated the cook-off generated more than $10,000 for Pahrump’s No To Abuse Agency, of which Frazier is treasurer.

He also noted that he plans to make a few alterations for next year.

“We just want to perfect it a little bit more over this year,” Frazier said. “Next year, we are planning on having an ICS junior division. It will be those under 18 years of age.”

It’s the fifth year in a row that the senior center emerged victorious.

Site Manager Anne Harris said she and the staff were extremely pleased with their victory.

“We are all honored to win first place for the fifth year in a row and third place in the People’s Choice award,” she said. “Yolanda and Tiffany have once again proven their cooking skills. They work very hard at the Pahrump Senior Center to put out great meals every day for our seniors and this is a wonderful tribute to their ability as cooks. “

“This is not only a fun event but it helps a great organization and we are happy to help support Pahrump’s No To Abuse agency,” Harris said.

Winners in the People’s Choice were Deanna O’Donnell’s “Our Chili is Better than Theirs.”

O’Donnell was followed by Pat Higdon and the Pahrump Senior Center, who took home second and third place honors respectively.