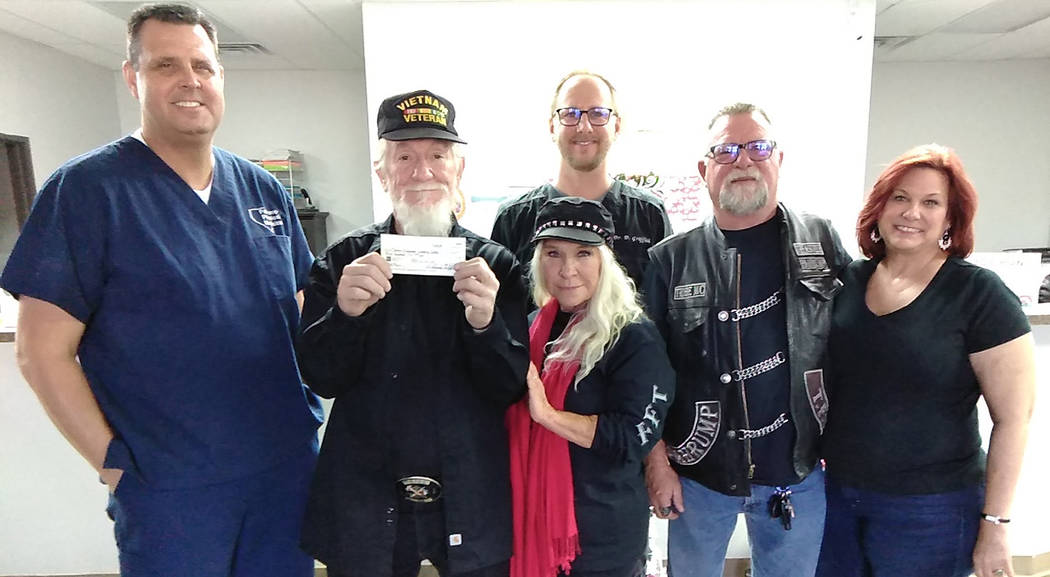 With the holiday season now in full swing, an annual Christmas ritual is set to get underway.

Members of the Tribe Motorcycle Club in Pahrump will be hitting the streets delivering hundreds of toys, including bicycles to local children who otherwise would not have much of anything to enjoy on Christmas morning, save maybe the spirit of the holiday.

Tribe President Ralph “Red” Pillman said the group of riders have been performing the goodwill gesture for more than 20 years right here in Pahrump.

“We started out in Vegas years ago before I moved out here,” he said. “We saw a need out here, so when we moved to Pahrump, we started very small and it’s just gotten bigger every year. This came about through the Oasis Outreach Church and through another church. It just got bigger and bigger and more members of the community became aware of it and also got involved.”

Of those community members, officials with Pahrump Physical Medicine, formerly Affiliated Chiropractic at 2080 East Calvada, have provided much-needed support in the effort, as a recent $500 donation was bestowed upon the club.

Dr. Michael Taylor noted this is the second year he and his staff have participated in the event.

“I’ve been in the valley since 2006 and have been involved in a lot of other things,” he said. “We try to be a community-based business as long as we’ve been here and that’s what it’s really about. We treat the community as if we are part of it and that’s what we want people to think of us as. We are just so fortunate and happy to be here.”

Taylor’s colleague, Dr. Daniel Griffith, said anyone who chooses, can drop off an unwrapped toy at the location, which is one of several around the valley.

“People can easily walk in and drop off a toy or a bike,” he said. “Anyone who is willing to bring in a new bicycle, which is something that is just really nice for a kid to have under the tree on Christmas morning. The person who donates the bike can get a free half-hour massage on us. They can also use it as a gift for their spouse for a Christmas present or a stocking stuffer. We also have a TV that we are going to raffle off for anyone who brings in a new unwrapped present.”

Pillman, meanwhile, said the age range for the toy drive is anywhere between one through 15 years old.

Pillman also noted that the children and their families are selected and identified through various groups and agencies throughout the Pahrump Valley.

“The toy run is coming up on December 9th and 15th and every family that we support will also get a full Christmas meal, which includes a turkey and all the trimmings,” he said. “At present, we are looking at probably 35 families the first weekend and 35 families the next weekend. It’ll be upward of about a hundred families. If it were not through the efforts such as this, there would be a lot of kids who would have nothing to open on Christmas morning. We try to fill that need, but there’s other organizations that also do it. It really takes a group to pull this off and there are scores of members who belong to the Tribe Motorcycle Club.”