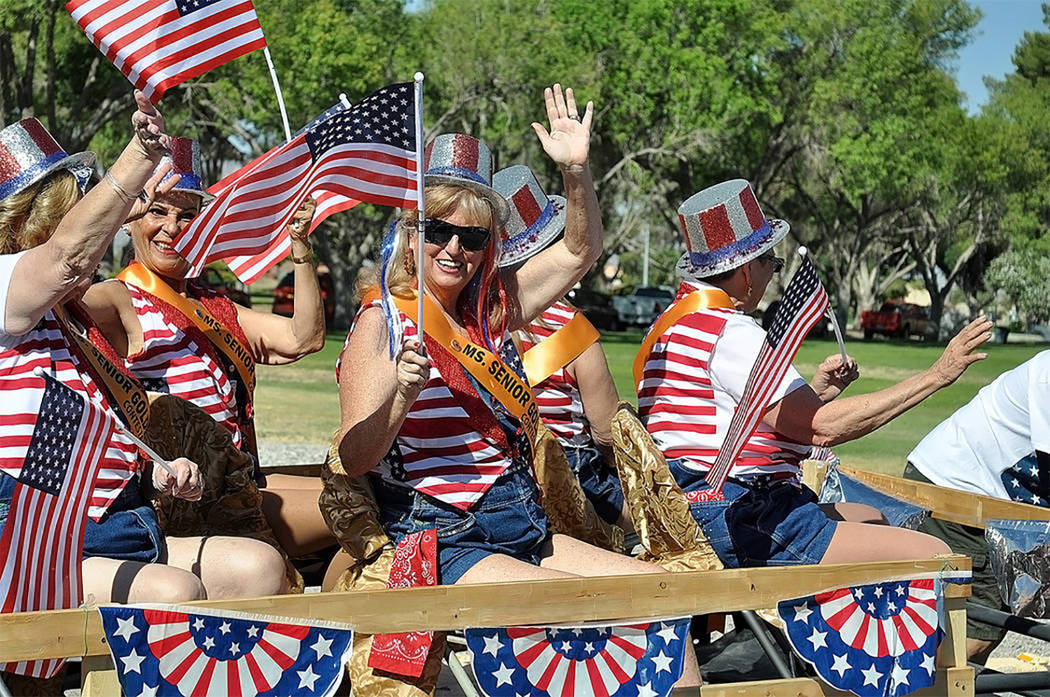 Horace Langford Jr./Pahrump Valley Times Contestants from Pahrump's Ms. Senior Golden Years show their respective patriotism during last year's Fourth of July Parade. The town was recently named the Most Patriotic community in Nevada by Insurify, an American insurance comparison shopping website. Data specialists at Insurify this year sought to identify the most patriotic communities in all 50 states.

The town of Pahrump has a brand new moniker and designation.

News came down this week that Pahrump was named 2018’s most patriotic community in Nevada.

The information was supplied by Insurify, an American insurance comparison shopping website.

Insurify Partnerships Director Richard Knapp stated in a news release that the company analyzed more than 900,000 completed auto insurance applications, which indicated whether any individual named on the policy was a current or former service member.

“The resulting data was analyzed to determine the percentage of local residents who identify as current military or veteran, and then the top-ranking city in each state was identified,” Knapp noted. “In the eyes of the Insurify team, it is these communities that deserve to be recognized as the most patriotic cities in America.”

Knapp went to say that in order to recognize those who have served our country, the data specialists at Insurify set out to identify the most patriotic communities in all 50 states.

“According to our data, these communities are home to the highest percentage of individuals who are currently serving in the military or identify themselves as veterans,” he said. “Some may not surprise you because towns located outside of military bases naturally have a higher representation of current and former service members, while others represent pockets of patriotism that may be overlooked. However, all deserve to be saluted for their contributions to the national defense.”

Additionally, Knapp noted that the tradition of serving in the military comes at a high cost, as more than one million Americans have died during wartime since the country’s founding.

“Recent data puts the size of the U.S. military, including active and reserve forces, at just over two million personnel, a number that represents a smaller slice of the American population than at any other time in recent history,” he said. “As the size of our military is decreasing, so too is the count of living veterans. As of 2017, only 558,000 of the 16 million Americans who served in World War II, were still alive.”

Headquartered in Cambridge, Massachusetts, Insurify is also the operator of Evia, which allows users to search for car insurance by texting a photo of their license plate.