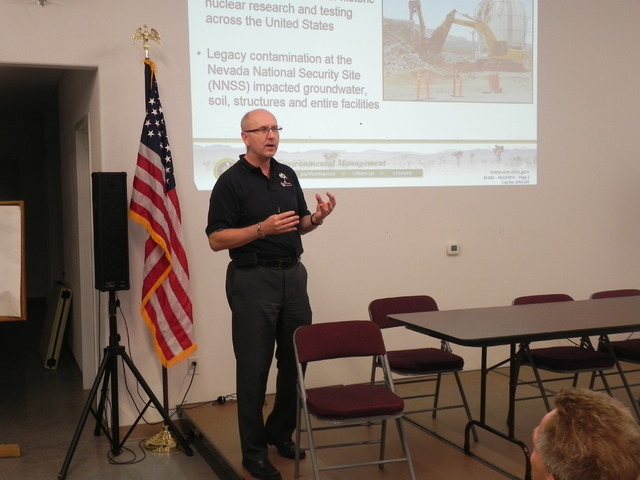 Many of those shipments came through Pahrump, according to Scott Wade, National Nuclear Security Administration assistant manager for environmental management.

“Well over a decade ago we came to an agreement with the State of Nevada that we’re going to use as much as possible rural routes,” Wade said during a talk at the Pahrump Valley Museum’s National Nuclear Science Week. “We try not to use rural routes that put any one population at a disadvantage. So when a truck load comes out, the route it takes depends on where it’s coming from.”

Shipments from nuclear energy facilities like Hanford, Wash. and the Idaho National Engineering Lab travel south down U.S. Highway 95 to the site and do not travel through Pahrump, Wade said. But, about 70 percent of the shipments from places in the East, like Oak Ridge, Tenn. and Savannah River, Ga. travel up to the security site from the southern route along Interstate 40, he said.

While some of those southern shipments travel from Baker, Calif. north on Highway 127, skirting around Pahrump, Wade told the Pahrump Valley Times, “a great majority of them candidly go through State Route 160 and through Pahrump.”

“We’ve disposed of over 25 million cubic feet just at this one site that’s been operating since 1961 and we do it through a very, very robust program that first and foremost studies the geology of the area,” Wade said. “Is there a path to groundwater from this facility? By putting the waste in the ground is it going to contribute to any degradation of the groundwater? Is there a risk again to aerial contamination coming off of the facility?

“We studied that in depth over the last two decades and what we found is that there isn’t a path to groundwater, there isn’t a risk to either workers or the environment from the site.”

The volume of material dumped at the security site may seem large, but it’s only 5 percent of the nuclear waste generated annually from federal nuclear facilities, Wade said. Approximately 91 percent of the waste stays at the facility where it was generated. At Hanford, Wash. for example, he said, there’s 177 underground storage tanks with 57 million gallons of liquid nuclear waste.

He outlined a strenuous protocol of examining trucks entering the security site with nuclear waste.

An environmental management program was formed at the Nevada National Security Site, formerly the Nevada Test Site, in 1989 after the controversy over the cleanup of the Rocky Flats nuclear arsenal in Colorado, Wade said.

The National Nuclear Security Administration wanted to take careful stock of what was being done across the nuclear complex, he said.

The security site is a unique location, he said geographically and geologically isolated, with 1,360 square miles surrounded by the Nellis Test and Training Range.

“We had 828 nuclear weapons tests done, about a third of those were at or near the groundwater,” Wade said. “They were done for very, very good reasons but that left a legacy of contamination.”

“We’re getting close to coming up with what we call a decision document we’re going to submit to the State of Nevada, our regulator that defines what is the extent of contamination and where we’re going to put in our long-term monitoring,” he said of the nuclear test legacy. “Even though our models may not show the transport of these radionucleids left alone are not going to get out of Frenchman’s Flat and get out of the test site, we have to prove that with long-term monitoring.”

Similar long-term monitoring locations will be set up around Yucca Flat, Rainier Mesa and Paiute Mesa, he said.

Groundwater contamination is one of three major areas in the cleanup program at the security site Wade said, the others are cleanup of soils from atmospheric detonations and industrial sites. The U.S. did intentional destruction of nuclear weapons so the scientists could understand contamination spread, he said. Sites on the Nellis Test and Training Range and the Tonopah Test Range have to be characterized for wind-borne transport of contamination from plutonium and highly-enriched uranium.

“We’ll take all the data for those locations, present a model, we’ll present it to Nevada and make a case it’s safe to leave it where it is. Seventy percent of these activities are completed, so we’re making progress here, we’re just about two-thirds of the way done. I think we’re going to be done with our soil activities around 2017, 2018,” Wade said.

Industrial sites no longer in use have been disassembled, like the Radioactive Maintenance and Disassembly facility and the Pluto facility that supported a nuclear-powered bomber, he said.

Wade said people in Pahrump are passionate about staying informed on nuclear waste transports through the area. A crowd of 120 people gathered a year ago at Nevada Treasure RV Resort on Leslie Street to question the nuclear administration about proposed shipments of 403 canisters of more radioactive material, including uranium 233, from the Oak Ridge National Laboratory in Tennessee.