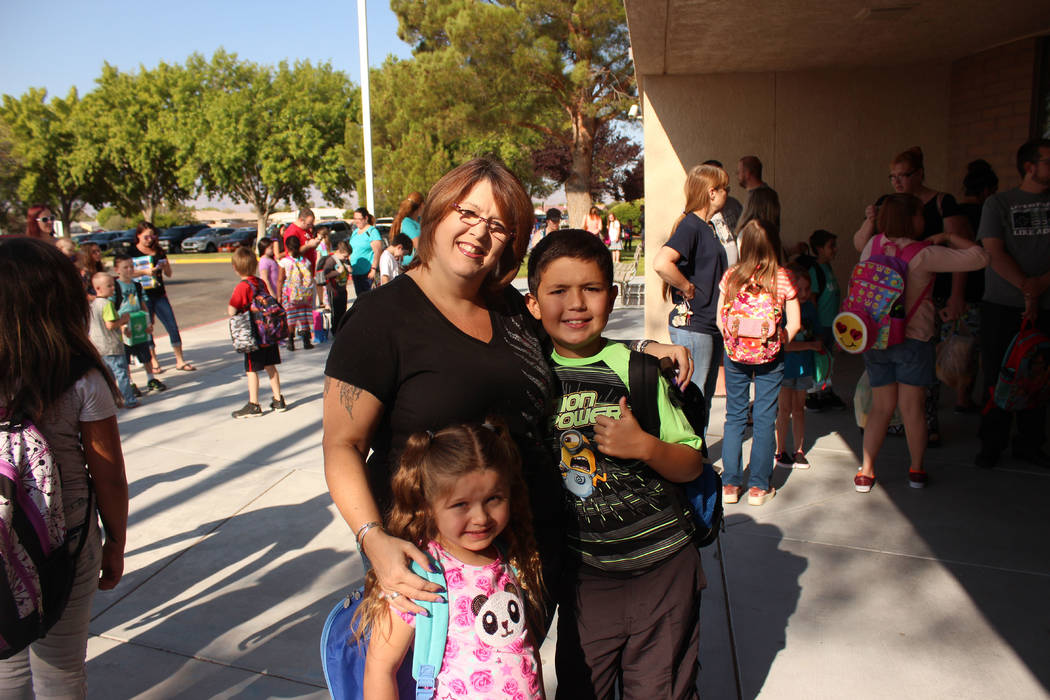 Jeffrey Meehan/Pahrump Valley Times Charlotte Hernandez, mother of a fourth grader, Roman and first grader, Izza' Bella, wait for the doors to open at J.G. Elementary School on Aug. 7. That was the first day of instruction for most kids in the Nye County School District. 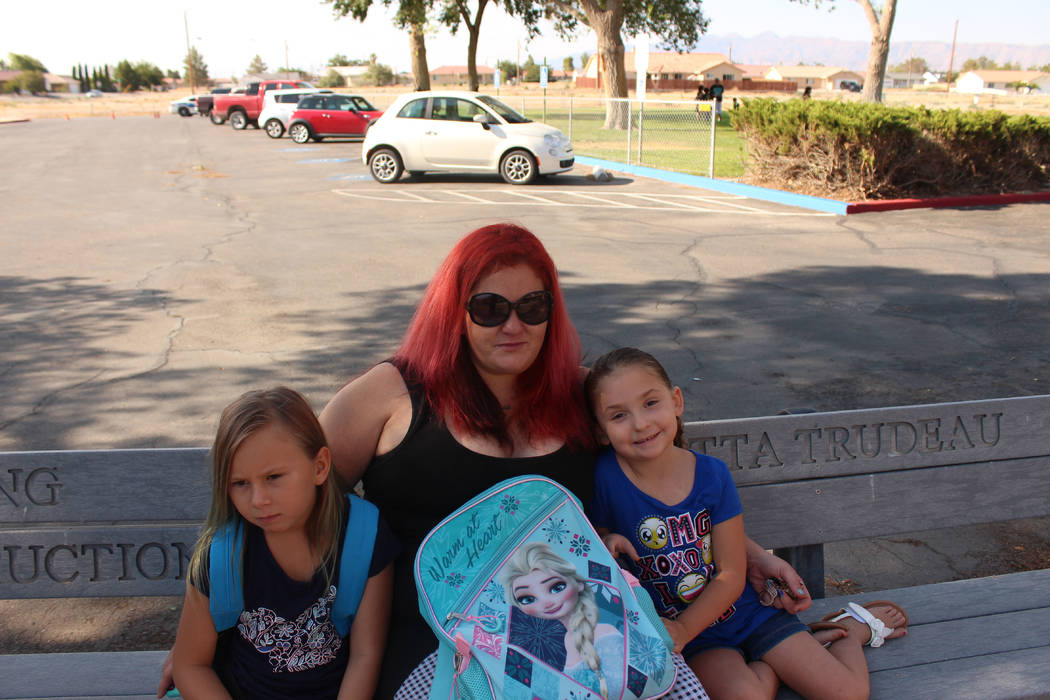 Jeffrey Meehan/Pahrump Valley Times Christina Pipkins (center), mother of a first grader, Cerenity, (right) on Aug. 7, the first day of instruction for most kids in Nye County. Kindergarteners and prekindergarteners start on Aug. 14. 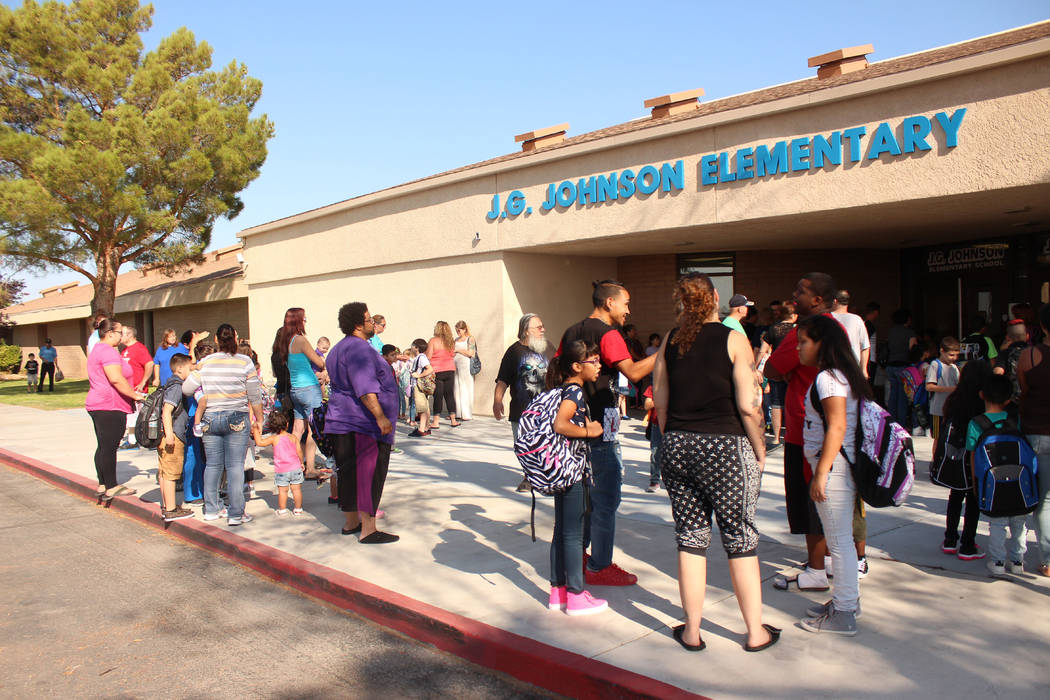 Jeffrey Meehan/Pahrump Valley Times Several parents wait for the doors to open at J.G. Johnson Elementary School in Pahrump on Aug. 7. Instruction begins at 9:05 a.m. instead of 8 a.m. for daily meetings. 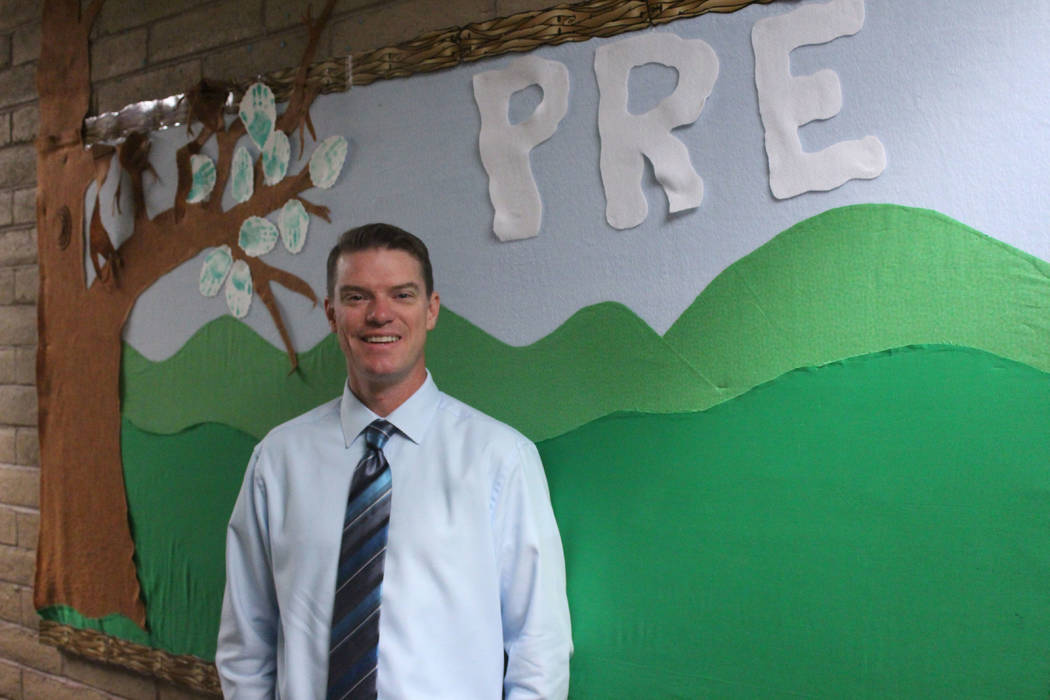 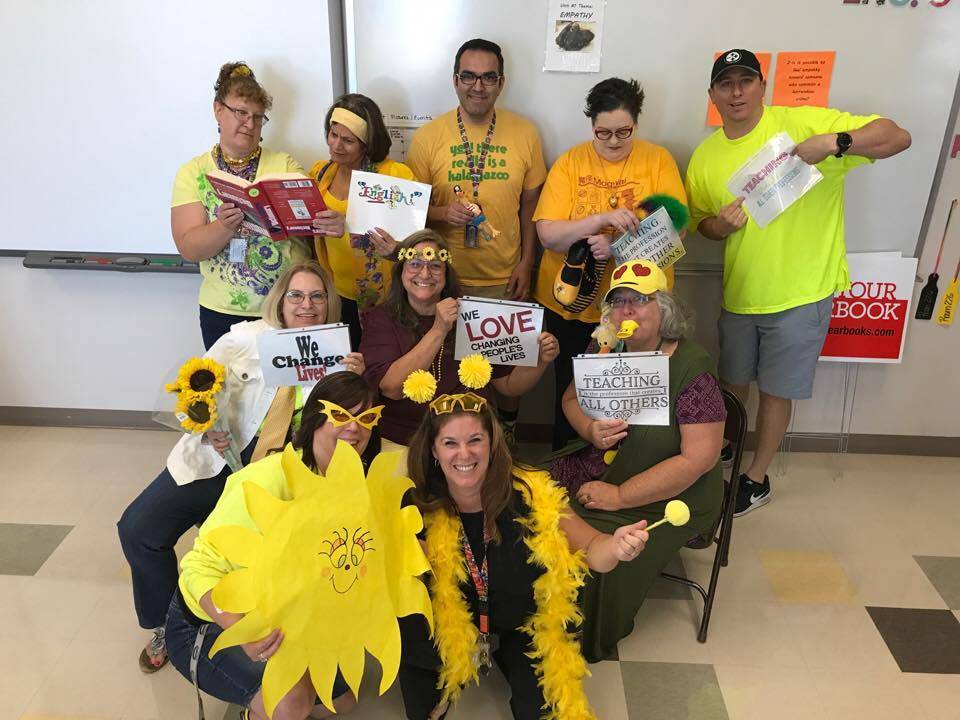 Jennifer Ehrheart, principal at Pahrump Valley High School Teachers come together on new themes that they want to improve on during in service meetings. Those themes include prepared, collaborative, honest and respectful.

The first day back to school for kids in the Nye County School District was a success for many parents around the valley.

Charlotte Hernandez, mother of two kids at J.G. Johnson Elementary School in Pahrump, said she prepared for today by buying school supplies, new clothes and to get her fourth grader, Roman and first grader, Izza’ Bella to the door on time.

The family is new to the district, coming from Oklahoma.

“Pahrump is actually a lot bigger than the town we just came from,” Hernandez said.

Hernandez said everyone was looking forward to making new friends.

School went back into session for first through fifth graders on Aug. 7. Prekindergarteners and kindergarten classes will resume on Aug. 14.

Pipkins said her daughter, Cerenity, was a bit anxious this year with the school change.

The elementary school’s start time did put a bit of a bump in the road for some kids but not all.

The district enacted the use of Professional Learning Communities (PLC). This entails 45-minute daily meetings, where teachers and paraprofessionals collaborate about how to deliver educational material in the most effective manner to students in the district.

PLCs are one of the big focuses for this year’s class, according to Scott Winter, principal at J.G. Johnson Elementary School.

“What I did is I physically grouped all of our teachers, so that they are close by,” Winters said. “They can still collaborate.

They’re right there to mentor each other and really push that kind of PLC framework.”

This did mean some switching around for parents who may have gotten used to their child’s teacher being in a certain spot.

Winters said he podded them in different groupings so that everybody’s close by their own grade level.

The elementary school also brought in some new faces over the summer and for the spring semester—from both the local area and Las Vegas.

Winters said the elementary school, along with the entire district, is also focused on a push for Positive Behavior Interventions and Supports.

The system has a more positive, reteaching feel to it, he said.

Jennifer Ehrheart, the new principal at Pahrump Valley High School, also focused on the Positive Behavior Interventions and Supports model, which she learned about during her principal training.

“As a team from PVHS, we came up with the four things that we wanted to improve on,” Ehrheart said. “We’ve been focused on those through our in-service, as well as getting the mandatory requirements done.”

Those four themes she wanted to focus on were to be prepared, collaborative, honest and respectful.

But it wasn’t all serious business at the in-service meeting.

“They were goofy and had fun together,” Ehrheart said.

Ehrheart said it was also a good first day for her, as the new principal at the high school.

Ehrheart said is was also good to meet all the students.