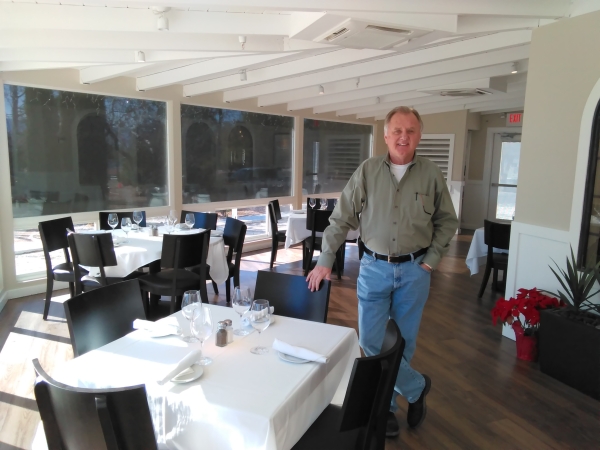 Work will continue on the exterior of the winery following upgrades to the kitchen and dining room of the restaurant.

“In 2016 we are looking forward to redoing the grounds and we are going to greatly expand the wine production facilities,” Bill Loken said. “We plan to make it four times larger than it is right now and that will be done in 2016. We bought the land next door so that we could add additional parking, and we are looking at what we can do with the roughly 10 and a half acres of land adjacent to here.”

Loken said 2015 was a record year for Pahrump Valley Winery, while noting a steady progression of success through the years.

Loken insists the dedication he and his wife have for the business is one main reason for the winery’s success after 13 years in the business.

“We are both way more driven by having a great winery and a quality product than we are about the money and it’s just that simple,” he insisted. “I tell people all the time that we put millions of dollars into this winery, and we still have paper blinds on our home that we have lived in for the past 13 years and that is the truth.”

Part of the Loken’s success can be attributed to the winery’s restaurant, Symphony’s.

Loken said a recent renovation project allowed for the expansion of the dining room area.

“The new addition picked up about 1,800 square feet and we extended the kitchen too so that it could handle the increased volume that we are anticipating,” he said. “We also have a private dining room which seats 24. We completed the expansion a little more than a year ago.”

Loken also said work is expected to begin on the exterior grounds of the winery in early 2016, as efforts will be made for water conservation.

“We are taking out a large amount of our landscaping and replacing it with more responsible desert type of flora landscaping to reduce the water usage,” he said. “So far we have taken about 12 or 15 trees, and while we’re not planning to take them all out, we are going to thin things down and replace a lot of the vegetation with stuff that’s much more water-conscious, like Palo Verde trees. When it’s all done, we are going to take the stage down and rebuild it for first-class events and concerts.”

What will also continue, according to Loken, are the high standards the winery continually strives for.

At present, Pahrump Valley Winery has garnered scores of national award medals, 18 of which are gold, 39 are silver, along with 21 bronze medals.

“We have 78 national award-winning wines here, 18 of which are first place and that has really been a mind-bender for us,” he said. “It was only a few years ago we were only doing one ton of Nevada grapes a year, which doesn’t produce a whole lot of wine. This year we did about 30 tons of Nevada grapes and we are continuing to grow the vineyards here.”

Additionally, Loken said wine producers in California and beyond are taking notice at what the town of Pahrump can produce in terms of premium wines.

“We are winning gold medals in competitions where some of the California and Napa wineries are winning the silver medals,” he said. “It’s important to keep in mind that the judges are all professionals in the wine industry and they taste the wine blind, so they don’t know where you are from and that’s what makes it so credible.”

As an example, Loken held aloft a bottle of the winery’s latest vintage, Nevada Ridge 2013, which is produced exclusively with Nevada grapes.

“Under Nevada Ridge right now, we are bottling six different wines, but there’s actually more than six different Nevada wines that we make,” he said. “One is called Silver State Red, which is a blend of a number of different grapes that are grown. We usually release about two years from the harvest date, because we want it to age for at least a year and a half. You get the 2014 in about a year or so.”

Loken credits any wine’s success on the region where the grapes are grown.

He said Nevada’s climate produces some of the finest grapes available anywhere.

“We are pulling fruit from three different locations, which are Pahrump, Crystal Heights and Amargosa Valley with a fourth coming up pretty soon in Fish Lake Valley, which a lot of people aren’t familiar with,” he said. “The conditions there are spectacular and similar to Northern California. They are really ideal for growing grapes. In 2016, we are expanding greatly in Amargosa Valley.”

When talking about the awards his winery has earned over the years, Loken made sure to give credit to his wife for the success.

“Gretchen is the winemaker, but I like to tell people that she’s the brains of the outfit and I’m just a company sex symbol,” he said with a laugh. “We’re still offering our tours as usual. We don’t have any big events planned yet for early spring because we are going to be in the middle of the additional work on the grounds.”

This week, the Loken’s and staff are preparing for Symphony’s annual New Year’s Eve dinner celebration on Thursday, which has sold out.