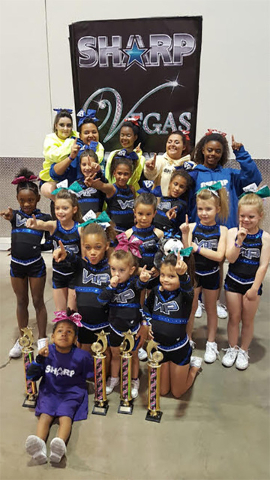 Coordinator Alicia Lewis said Pahrump’s team performed like the “champions they were” while competing in Las Vegas on April 23.

Pahrump’s athletes range in age from two to 18 years of age in four categories.

The team participated in two competitions known as “Sharp.”

It’s described as a high-energy competition and camp circuit for those interested in performing in national cheer competitions in Las Vegas, California, Hawaii and beyond.

During the second Las Vegas competition, the squad took home one second place award for the tiny team.

“We then had our mini, youth, senior, and dance team,” she said. “We also had one individual routine. We also took home the Most Spirited Gym, which was huge, because they put all the gyms together. To get most spirited along with some of the larger gyms, that was huge.”

During a recent Sharp competition at Knott’s Berry Farm in California, they went head-to-head against several Golden State teams.

“This particular competition was just for the cheer team, but we have a mini team, a tiny team, a youth team and our senior team,” she said. “They also competed in another Sharp national competition and that one was at Knott’s Berry Farm on Sunday, May 1st.

“In the Knott’s Berry Farm competition a lot of California-based teams were there as well as a couple of Las Vegas teams,” she said. “It was a two-day competition. They also had high school and middle school cheer teams. They had different variations of cheer and dance in the competition.”

At present, there are roughly 40 kids participating in Pahrump’s VIP Allstars.

Lewis said she is hoping to take on more students when tryouts occur this Sunday and early next month.

“There are two separate dates for tryouts,” she said. “The first one is going to be on Sunday, May 15, from 10 a.m. to 2 p.m. There will be another one on June 4th from 10 a.m. to 2 p.m. Parents and their kids are welcome to come in and try a free class to see what it’s like. They can come and meet the staff here.”

The VIP Allstars’ gym is located at 1375 State St. Suite 9, just a block north of the Saitta/Trudeau car dealership off Humahuaca Street.