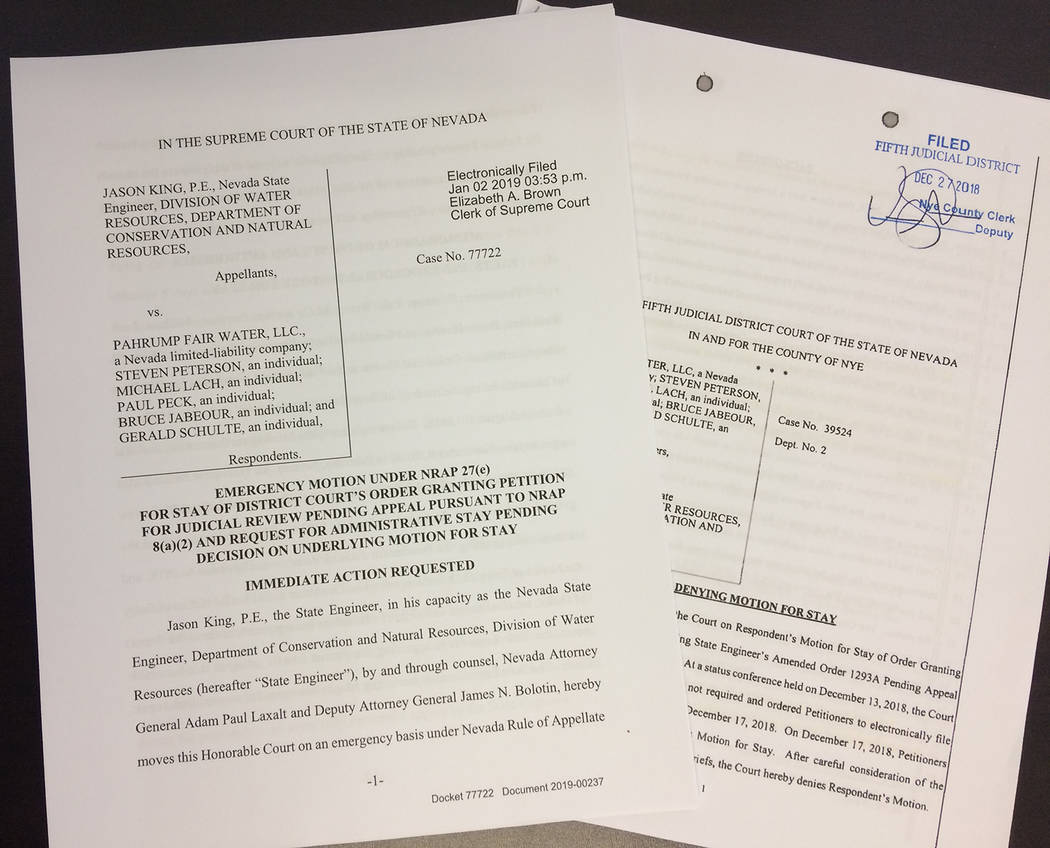 Robin Hebrock/Pahrump Valley Times Pictured are documents detailing the Fifth Judicial District Court's denial of the Nevada State Engineer's motion for stay of the ruling reversing water Order #1293A, as well as the engineer's subsequent motion for stay filed with the Nevada Supreme Court. The supreme court has not yet decided whether to grant or deny the request.

Last month, District Court Judge Steven Elliott ruled that Nevada State Engineer Order #1293A be overturned, citing an overreach of authority, lack of due process and lack of evidence to support the issuance of the order, which restricted the drilling of new domestic wells in Pahrump. Unsurprisingly, the state engineer’s office has filed an appeal and the matter now sits with the Nevada Supreme Court.

Prior to filing its appeal with the Nevada Supreme Court, however, the engineer’s office also filed a motion for stay of the ruling that rescinded Order #1293A, so as to allow the office to continue to operate under the restrictions of that order until the appeal case reaches a conclusion. As required by law, the engineer’s office submitted the motion first to Judge Elliott, who denied the request.

According to the attorney for Pahrump Fair Water LLC, the entity that initiated the lawsuit against Order #1293A, because the motion for stay was denied, the state engineer’s office should now be signing off on notices of intent to drill. Only in the event that a stay is issued by the Nevada Supreme Court can the engineer’s office refuse to sign intents to drill based on a lack of water rights relinquishment.

“Judge Elliot’s decision overturning Order #1293A became effective on the day it was served on the state engineer, Dec. 6. The written order gave the state engineer five business days to publish a notice on his website that Order #1293A had been overturned. This was completed on December 13,” Pahrump Fair Water legal representative David Rigdon, of Taggart and Taggart LTD, explained. “Because the district court has refused to stay its decision overturning Order #1293A, that decision remains valid and the state engineer should be signing off on any recently filed notices of intent to drill. It is the position of Pahrump Fair Water that the state engineer has no discretion whether to approve or deny such notices, rather the notices merely fulfill the registration requirement of NRS 534.180(2).”

It is unclear, however, whether the state engineer’s office holds the same view or whether it is in fact signing off notices of intent to drill. When questioned as to whether the office is allowing new domestic wells to be drilled without water rights relinquishment, state engineer officials provided an inconclusive response, saying only that requests to drill were being “reviewed” but not stating whether they were being approved.

Nevada Department of Conservation and Natural Resources Public Information Manager JoAnn Kittrell responded to the request for information, “The Office of the State Engineer is waiting for final determination of the motion of stay from the Nevada Supreme Court and continues to review notices of intent to drill.”

Kittrell noted that the engineer’s office had filed its emergency motion for stay with the Nevada Supreme Court on Wednesday, Jan. 2 and now awaits a decision on that request. In the motion, the engineer’s office detailed that since the hearing on Nov. 8, 2018 when Judge Elliott ruled in Pahrump Fair Water’s favor, the office has received 232 notices of intent to drill in Pahrump’s Basin #162.

“Pahrump Fair Water will vigorously oppose any such motion for stay,” Rigdon stated. “As noted above, unless the Supreme Court issues such a stay, Judge Elliot’s decision remains in full force and effect.”

In the meantime, the court schedule as it sits right now requires the state engineer’s office to submit its opening brief by April 23 and Pahrump Fair Water will have until the end of the following month to provide its answering brief. The state engineer will then have an additional 30 days to file a reply brief. Only after all of this is complete will the Nevada Supreme Court decide whether to hold a hearing to hear oral argument in the case, Rigdon explained.

The appeal is filed under case number 77722 and documents pertaining to the case can be found at www.nvcourts.gov/supreme/