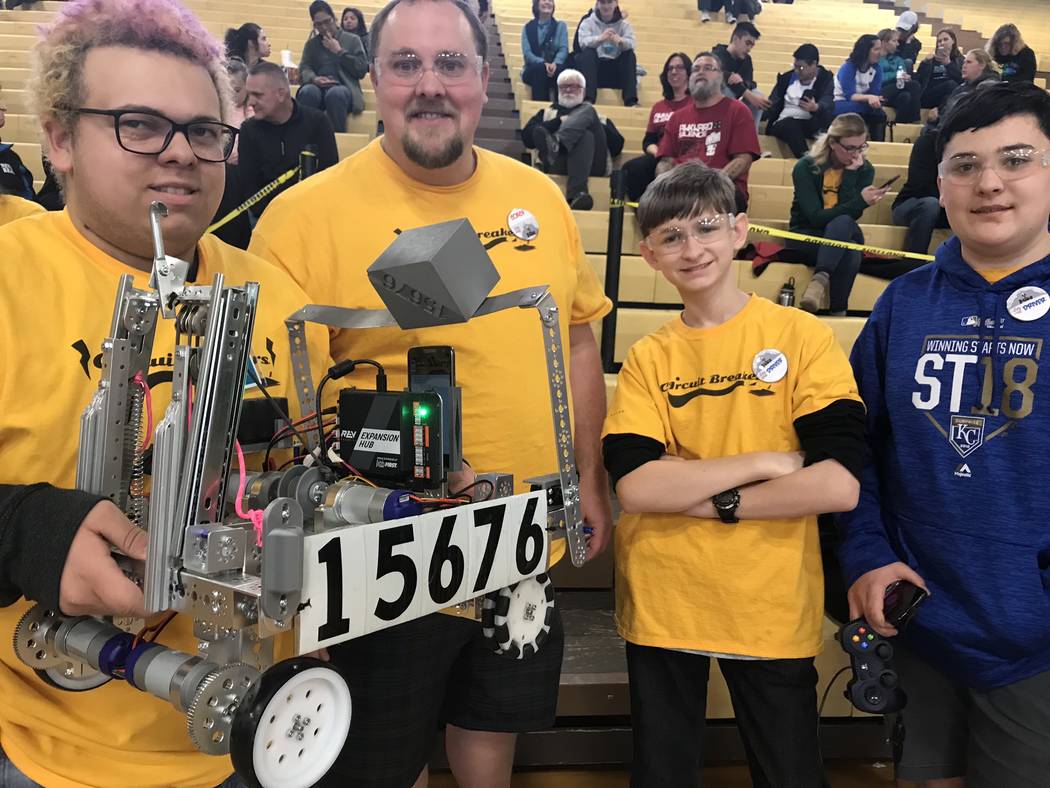 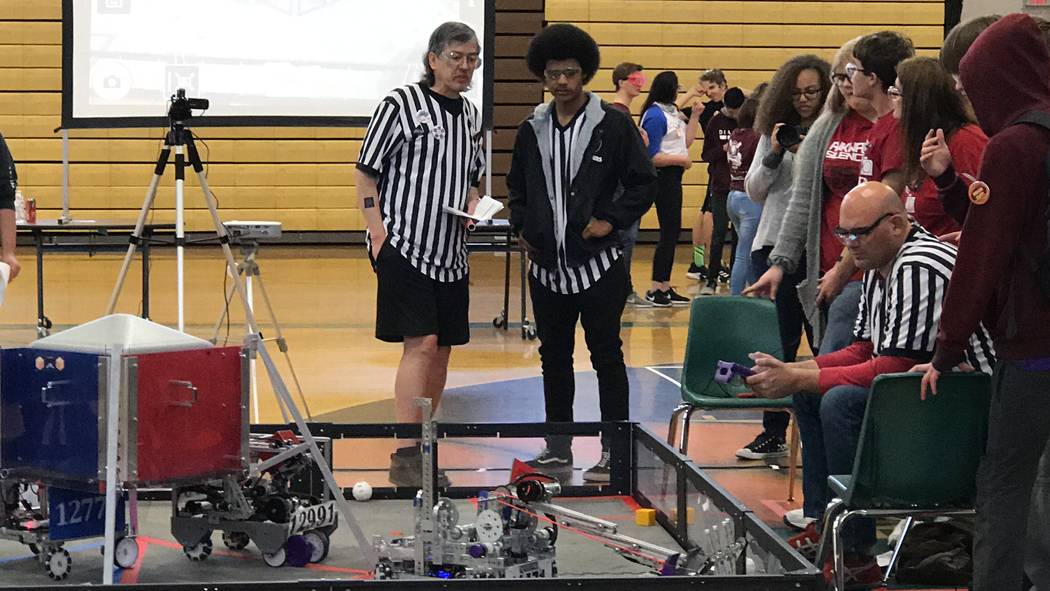 Jeffrey Meehan/Pahrump Valley Times The Pahrump Southern Nye County 4-H team made it to the finals in the 2018-2019 season of the FIRST (For Inspiration and Recognition of Science and Technology) Tech Challenge state championships in Las Vegas on Feb. 9, 2019. 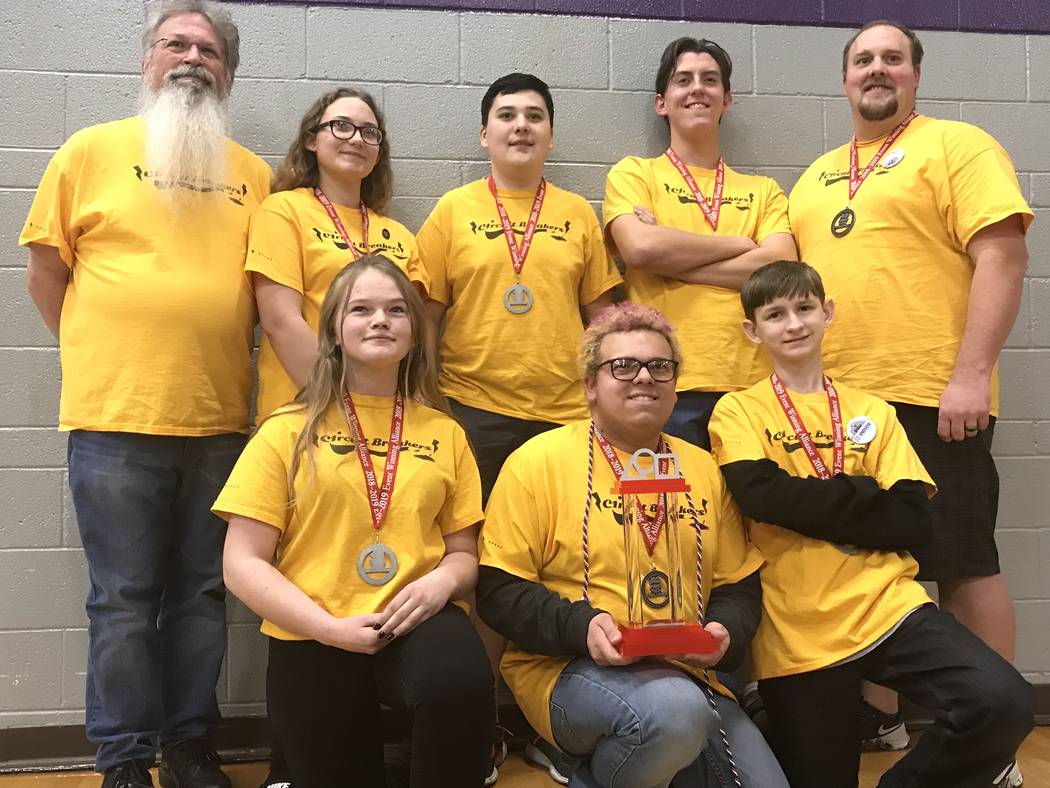 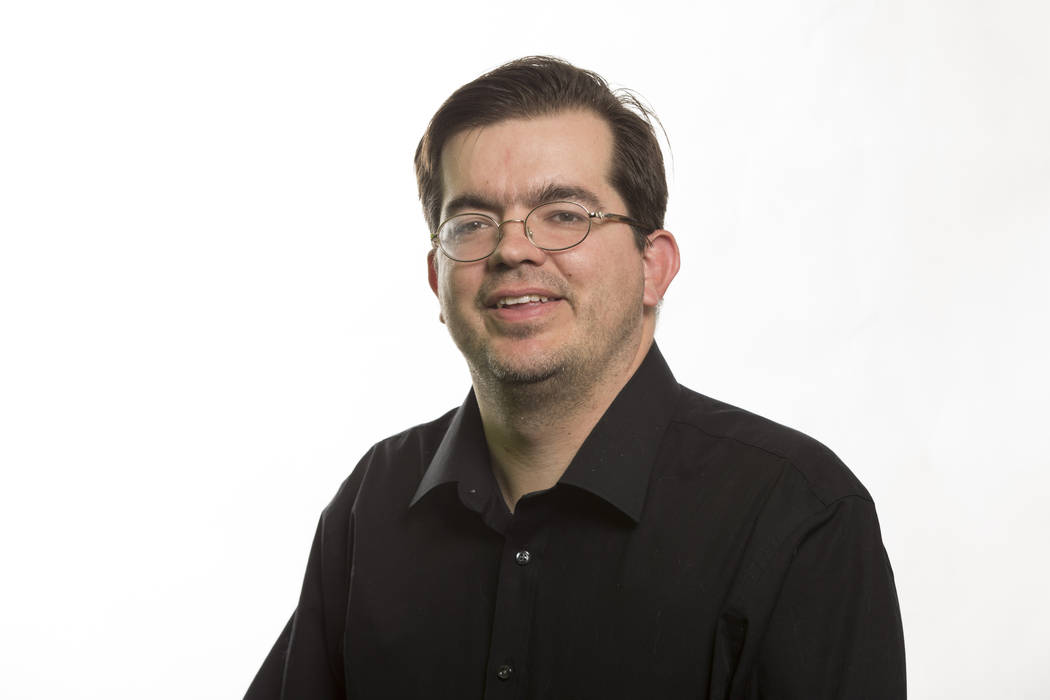 Robotics competitions have taken Pahrump by storm, and area school-aged children have taken that torch to the top.

The growth in kids getting involved in robotics competitions through FIRST (For Inspiration and Recognition of Science and Technology) Nevada’s group of programs seems to have skyrocketed since taking shape just a year earlier.

FIRST Nevada has a range of competitions it puts together annually for different age groups. The number of local teams involved in robotics has moved past a dozen.

A few of those teams have made the grade, so to speak, at statewide and regional competitions.

In the 2018-2019 season of the FIRST Tech Challenge, one of FIRST Nevada’s programs, local Pahrump team the Circuit Breakers from Pahrump Valley High School went all the way to the end with the winning alliance at a statewide championship.

This was the Circuit Breakers’ first year out after forming late in the season.

This isn’t the first Pahrump team to make waves at the state championship. In the 2017-2018 season, Pahrump team Awkward Silence, from the Pahrump Southern Nye County 4-H, charged ahead of the pack into the semi-finals in the statewide competition that season in Reno in the inaugural year of the team’s existence.

The team also took home the Control Award trophy at that competition.

“The Control Award celebrates a team that uses sensors and software to increase the robot’s functionality on the field,” according to information from the FIRST Tech Challenge’s award descriptions. “This award is given to the team that demonstrates innovative thinking in the control system to solve game challenges such as autonomous operation, improving mechanical systems with intelligent control, or using sensors to achieve better results on the field.”

Other awards were also given out at the 2018-19 state championships in Las Vegas this year to Pahrump teams.

The team was also the first pick to be in the finalist alliance with Cyber Mafia and second pick Neocratic Nerds.

An alliance is formed when a top team chooses additional teams to help it in the finals. The first pick by the winning alliance in the Las Vegas state championships was the Circuit Breakers from Pahrump, who were chosen by Cyber Mafia.

All the Pahrump teams, at a very rapid pace, have made Nye County a force to be reckoned with.

Interestingly, many other things are also in the works for the next era or phase, whatever you want to call it, in the evolution of Pahrump’s local teams.

Fundraising efforts have helped several local teams already and grants from Tesla have also impacted the sport. I might bring future announcements on a push to bring a large grant for the local team’s efforts in the near future.

It’s an exciting time to be involved in robotics in Pahrump, and it is also pushing Pahrump’s overall image upward across the state and in neighboring Clark County.

Jeffrey Meehan’s daughter is on the all-girl’s team, Pahrump Southern Nye County 4-H’s The Valkyries. The Valkyries participated in the state championships for the FIRST (For Inspiration and Recognition of Science and Technology) Tech Challenge in Las Vegas.