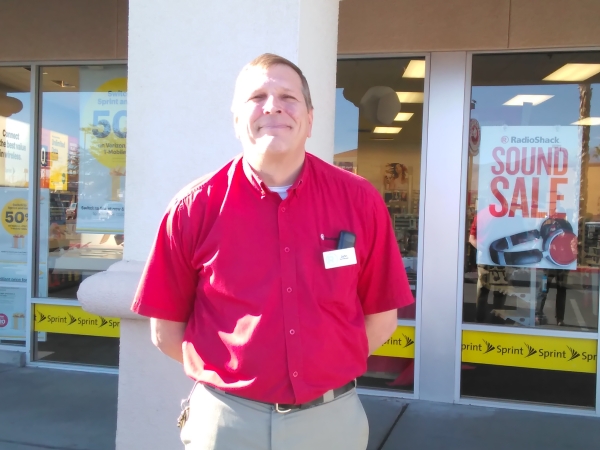 Pahrump RadioShack Manager John Dolin had a message for valley residents this week – “We are alive and kicking, and we’re here to answer everyone’s questions.”

Dolin was referring to concerns from customers about the 94-year-old company filing for bankruptcy in February after the electronics retailer built $1 billion in debt and was unable to keep up with incessant changes in today’s high-tech market.

Dolin said assistance came in the form of a major telecommunications company that provides wireless services and is a major global Internet carrier – the Sprint Corporation, who is also occupying RadioShack’s showroom.

“Every RadioShack that is open will have a Sprint with it at some point,” he said. “We have one now, but there are still a few stand-alone stores. At this time we are now officially partnered with Sprint.”

“Sprint helps us by bringing in the Sprint corporate footprint,” he said. “We have a line of Sprint phones and they will do the activations and people can pay their bill here. Boost and Virgin Mobile are also owned by Sprint and customers can come in here to do phone upgrades and pay their bills.”

Though some RadioShack outlets around the country have ceased operations, Dolin said it’s not the case with the Pahrump location.

Bankruptcy was not on Dolin’s mind last month with all of the holiday shoppers.

He noted one item that he said was literally flying off the shelves this month, drones, also known as Unmanned Aircraft Systems (UAS).

“Drones were really popular this year,” he said. “What we sell are not true drones by definition, but they are referred to as ‘Quad Copters’ and they were literally flying off the shelves. In fact, it got to the point where we would see somebody playing with our toy Quad Copter and all of a sudden four other people would gather around.”

As drones began gaining popularity recently, there have been numerous close encounters with private and commercial aircraft across the country.

Dolin noted that there are stark differences between what is considered a drone and a toy.

“A drone is something you can pilot remotely,” he said. “What we have are quad copter toys and even if they have a camera on them, they have a very limited range and power. None of the devices that we have here are going to be the ones that you hear about in the news where they crash on the White House lawn or have close encounters with commercial aircraft. What we carry here starts at around $40, but drones themselves can go as high as $4,000.”

Dolin also said some of the higher-end drones on the market must also be registered through the Federal Aviation Administration.

“There are specific weight requirements of course and people can check on faa.org,” he said. “We are expecting the FAA to clarify their stance a little bit more on the difference between what is considered a toy with a camera in it, versus an actual drone. But the good news is, when you do register it, you get a number that’s free to register it. The number covers all of your devices so each one doesn’t have to be done individually.”

Dolin said he’s concerned about some people using the device in what can be considered unorthodox or irresponsible.

“As far as the quadcopters and drones, I’m sorry to say that some people like to play with their animals with it,” he said. “They chase the dog and are filming it and things like that. It also has some uses outside of that of course. If you have an issue on your roof and you don’t want to climb up on the roof, you can use the device and observe what is going on with the roof on your phone, if it’s not a very windy day.”