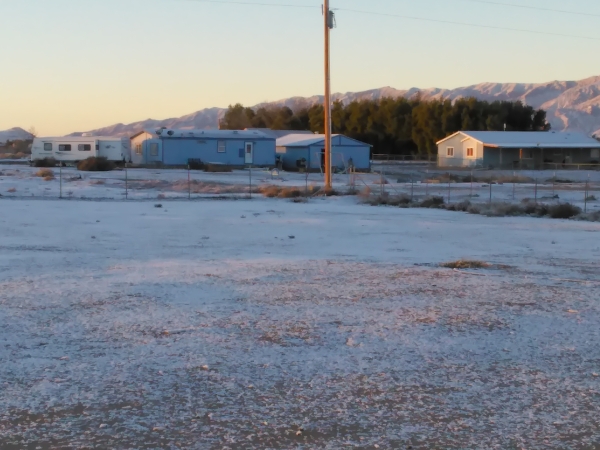 As Christmas morning rolled in, the area saw what many consider to be a holiday miracle, snowfall in various portions of Pahrump early Friday morning.

Reports started to trickle in just after midnight on the various social media outlets of the white stuff falling on Pahrump.

The National Weather Service Las Vegas office tweeted out at 12:50 a.m. Christmas morning: “snow sticking on some surfaces in NW #Vegas and Pahrump. Light accumulation on elevated sfcs possible. Use caution if out!”

Despite their acknowledgment, and by others, that it did snow in town and an assortment of photos that were posted online of the snow to prove it, the official amount that fell in town according to the National Weather Service was zero inches.

“While it certainly appears that Pahrump had a dusting of snow, it did not measure according to any of our instrumentation, which means it was pretty light,” said Chad Schafer, National Weather Service meteorologist. “The precipitation amounts are around .03 inches to .06 inches in and around Pahrump.

Schafer said that there is no record indicating that there has been snow on Christmas Day in the past, so although it didn’t measure, it still was a rare sight.

New Year’s Eve is just a day away and residents in the area can rest assured that there will be no snow, or rain for that matter, during the final day of 2015.

Schafer said that the high on Thursday will be 50 degrees, dipping to a low of 30 at night, with temperatures around 33 at midnight when revelers will ring in 2016.

There are some indications that it could be fairly breezy come midnight, but Schaefer said that the confidence in that isn’t too high at this point.

If your New Year’s Eve plans include making the trip to Las Vegas, expect much of the same weather over the hump.

“The forecast high is 51 and the forecast low is 31 and around midnight we have mid-to-upper-30s at this point,” Schafer said. “Kind of the same thing, could be breezy with winds off the northeast during the evening.”