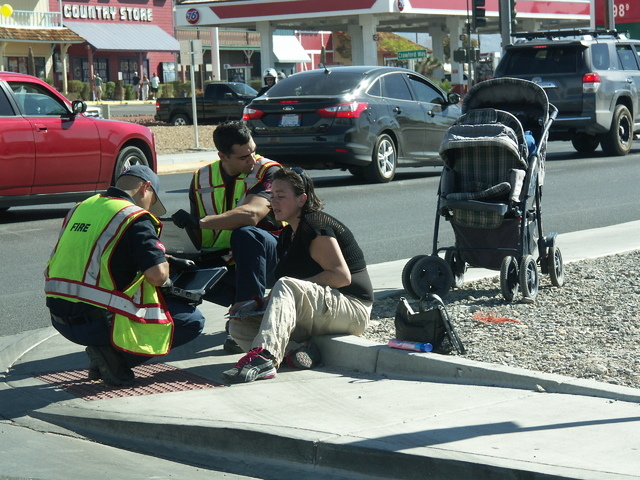 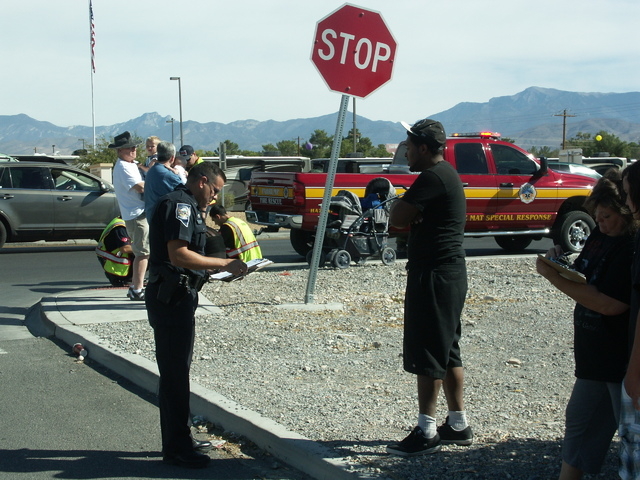 A local mother of two has much to be thankful for after a near tragedy occurred while she was pushing her toddlers in a stroller late Thursday morning.

The woman was walking northbound along Highway 160 in front of the Bank of America building when the driver of a late model PT Cruiser struck the trio just after 11 a.m.

Nevada Highway Patrol Sgt. Carlos Rivera said both the mother and her children are lucky they were not seriously hurt.

“The driver of the vehicle was exiting the bank’s parking lot onto Highway 160 looking to go southbound,” Rivera said. “The mom with her two kids were walking on the sidewalk and it appears the stroller was struck by the car. It was a very low impact.”

Nicholas Chapman was tending to some business at the bank when he witnessed the accident.

He said the driver appeared to be at fault.

“The woman was on the sidewalk crossing the entrance of the parking lot,” Chapman said. “The guy said he didn’t see her, but there’s a stop sign before you turn right onto 160. There was no traffic and it looked like she was trying to make the green light and he just kept going. The woman was just walking across where you turn into the bank parking lot to get to the sidewalk in front of McDonald’s.”

After the initial impact, Chapman said the driver almost hit one of the children twice.

After the child fled from the overturned stroller, he ran behind the vehicle that had just struck him.

“The driver said he couldn’t see them,” Chapman said. “If it were not for the car behind him, he would have ran the baby over. What business does he have driving if he can’t see what’s in front of him?”

Both toddlers and their mother were examined at the scene, but none were transported to the hospital.

Rivera said the driver may be cited.