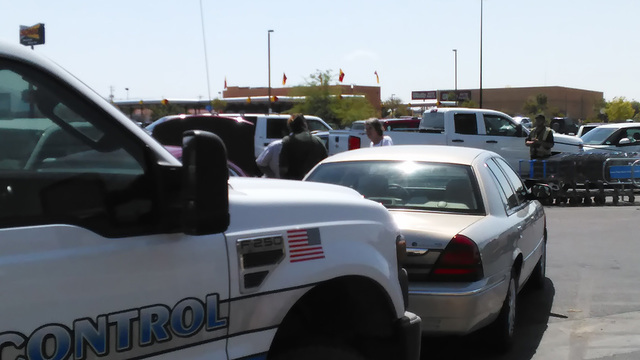 Nye County Animal Control Officer Susan Ryhal speaks to out-of-state travelers about laws pertaining to pets left inside vehicles. The owners, from Missouri, were not cited, but warned, according to Ryhal. Fines for such offenses are more than $600. Selwyn Harris / Pahrump Valley Times

Animal Control Officer Susan Ryhal said a couple from out of state left the car running with the air conditioning on, while they went inside the store to shop.

We received a call from a citizen that there was a dog locked in a vehicle with the windows rolled up, she said. The witness said that the keys were in the vehicle, so I suspected the car was likely running, but the witness said it was not.

Unlike previous similar calls, Ryhal said the dog appeared to be in good condition, as the interior temperature was not at life-threatening levels.

The car was running and the dog was quiet, well rested, and it looked comfortable, she said. It did not appear he was in distress. I waited and advised the owners that in the state of Nevada, its illegal to leave your pet inside the car, even with it running.

The owners, visiting from Missouri, were given a warning instead of a citation.

Fines for such offenses are upward of $600 in Nye County.

Ryhal said many people traveling from out of state are not aware of local laws pertaining to pets left in vehicles.

Most people from out of state are not aware of our animal ordinances, she said. Some states actually require that the owner leave the vehicle running with the pet in it. Some people just dont know about ours.

Ryhal also said if at all possible, people should just leave their pets at home while going out to shop.

Home is the safest thing to do for your pet, she said. Just because the engine is running, it doesnt mean that the car will always blow cool air, because the car is not in motion. We still get these calls on a regular basis. In fact, we get about several of these types of calls each week.