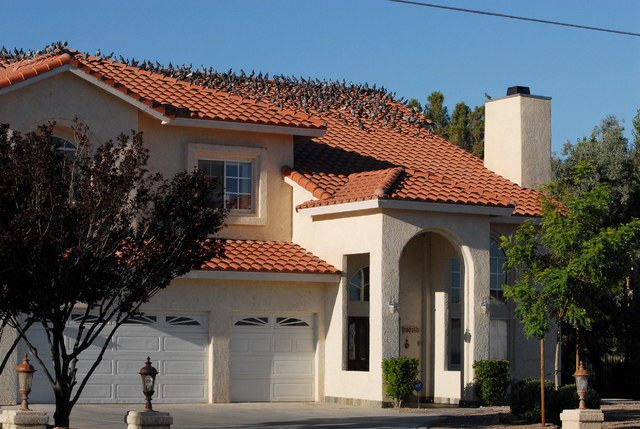 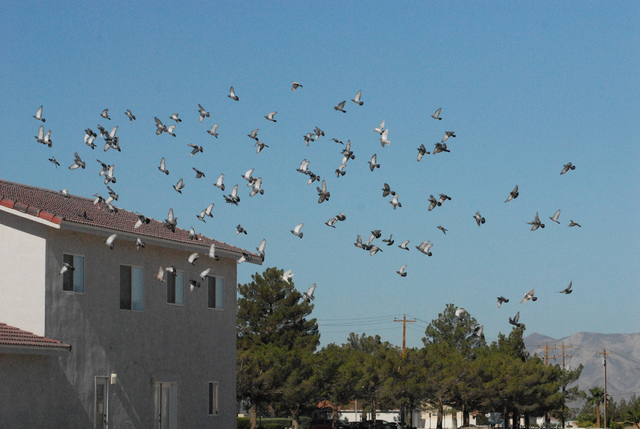 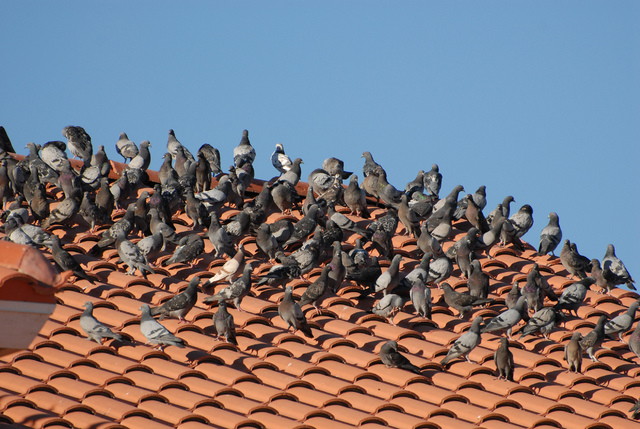 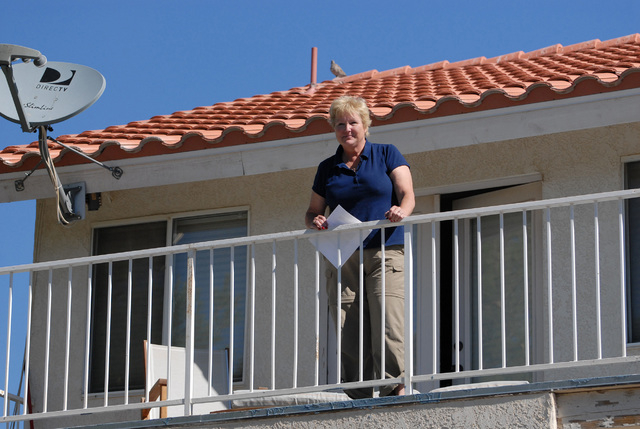 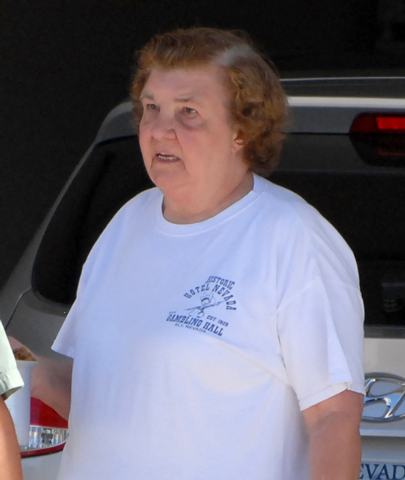 It’s a scene directly out of Alfred Hitchcock’s “The Birds.”

“In the early morning they darken the sky. At least 400 birds fly and roost around my house,” exclaims one outraged neighbor.

A pigeon war is brewing in Pahrump in a neighborhood adjacent to the Lake View Executive Golf Course.

The battle lines extend throughout the 1400 block of East Mount Charleston Drive.

Both sides say they are fighting to protect their property rights.

On one side is homeowner Marie Bennett, who lives across the street from the golf course clubhouse. She says she has a right to feed pigeons on her own property — even if they do number into the hundreds. On the other side are her neighbors who surround her house. They say Bennett is infringing on their rights because the birds make a mess on their property.

Liese Tamburrino is one neighbor who wants Bennett to stop feeding the birds.

Tamburrino says she is at her wit’s end, finding that here in Nye County not much can be done to control what she terms these flying pests. Tamburrino’s house is directly in the flight path of the birds and seems to be the most affected by the pigeon presence.

“There is bird poop everywhere. I spend about $40 a month cleaning the stuff from my patio, which I pay to be cleaned every week. The noise at times can be deafening, especially in the mornings. Sure, maybe three or four pigeons making that cooing sound can be nice but try waking up to 100 or so birds — that can be frightening,” Tamburrino said.

Bennett did not have much to say to the Pahrump Valley Times. A reporter approached her in front of her house recently as she was taking bird feed out of her car. When told that her neighbors wanted to control the pigeons she feeds, she replied, “I know she wants to kill them, but I really don’t want to say anything.”

Bennett was asked how far she was willing to go to save the lives of the pigeons and she responded, “I really don’t know. It’s my son’s home. I would have to ask him. I love birds and rabbits and love feeding them. The only place I see them going is to her house (pointing at Tamburrino’s house) and she threatened me. I will not stop feeding them.”

According to Bennett, the threat came from a letter Tamburrino wrote in hopes of gaining some support. The exasperated neighbor passed out a letter to all her neighbors, including Bennett, spelling out the issue. Tamburrino said she didn’t threaten any bodily harm to Bennett or anything that extreme. In the letter she wrote that she estimates a half pound of pigeon guano is removed from her front yard on a weekly basis. She also hoses her back balcony daily because of the pigeon droppings. The letter ends with Tamburrino “imploring” her neighbor politely to stop feeding the birds.

“I have had enough,” the letter states. “There needs to be consequences to you, ‘pigeon people’ for your gross inconsideration and selfishness. I have a right to live in a home free of feathers, bird filth and blood. I have consulted an attorney and he has advised me of my options. Accordingly, I plan to do the following, and I am making all of you aware of what I intend to do so that you can keep your pets and children safe while I try to recover my home and standard of living from this abuse.”

The letter goes on to describe how she was going to kill the pigeons and leave their bodies along with pigeon feces on Bennett’s property.

Bennett felt threatened and called the Nye County Sheriff’s Office. They responded. But after witnessing first- hand the predicament Tamburrino was in, told her to seek help through her county commissioner. Butch Borasky represents the area and will be meeting with Tamburrino and other neighbors Monday at 6 p.m. at Tamburrino’s home.

According to neighbors, Bennett started feeding the pigeons a few years ago and it was not as bad because there were only a dozen birds or so. Bennett is known in the neighborhood as the “pigeon lady.”

The war escalated about a year ago when “she put out large horse troughs (four to five of them) of feed for the pigeons and since then the population has grown from a dozen to 400.”

“We noticed an increase in pigeons roosting and then the mess increased. I can’t go out there in my own yard barefoot and I have a pool,” Tamburrino said.

Both Bennett’s house and Tamburrino’s house are both ideal for pigeons because they are two-story houses.

“Pigeons like high buildings. I really feel for the people in this neighborhood because unless they get rid of the food source, those pigeons will be impossible to get rid of,” said John Pawlak, an employee at the Pahrump Library who considers himself the resident library expert on pigeons.

Pat O’Malley, a retired police officer and neighbor of Bennett’s, has lived in the neighborhood for 18 years. He says he enjoys the peace and quiet. He also agrees with Tamburrino and wants the birds gone.

“These birds are just rats with wings. Their urine is encased with their poop, so you track it through your house when you walk on your porch or driveway. In the morning is the worst time to be out, when she is feeding them. I have seen the roof just black with pigeons and all the phone wires. We find pigeon stuff in our yard all the time,” O’Malley said.

The only solution is to kill the animals, O’Malley says. Using his BB gun, he said his wife is known as the neighborhood’s resident Annie Oakley.

Caroline Ray, who lives directly across the street from Bennett, said she also wants the feedings to stop.

“She would bring all this food that was left over and she would feed it to all the ravens and pigeons out in the bins around her property. We get pigeon waste all over our house. They nest up in the corners of our house and you can see that we have a real problem with the birds. If it was up to me, I would put some poison out there and kill them all. They are a health hazard. We have been suffering with that for three years,” Ray said.

Tamburrino says she has sought the help of county animal control. She said she was told they could not handle nuisance problems unless the pigeons physically attacked her.

A local pigeon expert, Martha Keefe, has raised pigeons all her life for the purpose of racing them. Keefe said pigeons can breed up to six times in a season, but generally don’t breed in the winter months. She added, “The pigeon feces is a health hazard and can pass diseases on to other animals like dogs.”

Another obstacle for Tamburrino is there are no ordinances in Nye County with regard to feeding feral pigeons. Darrell Lacy, Nye County’s code compliance director, said the community has generally never had a problem with pigeons. “She can check at the state level, but I am sure Nye County has nothing,” he said.

Neighbors are standing by to see if Borasky can come up with a solution, maybe broker a cease-fire in this brewing pigeon war.