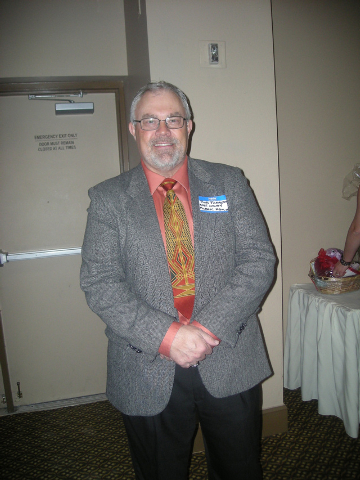 Pilkington said the job is closely related to his paralegal business, adding he worked under former Public Administrator Bob Jones from 2006 to 2010.

“The paralegal business I do is exactly what that job is. It’s pretty much taking care of people’s estates, making sure their documents are done correctly, making sure we actually try to find these people. The fact I set up their document system kind of speaks for itself. They still use my templates, all the templates I set up for them,” Pilkington said.

Pilkington and his wife Denise moved to Pahrump eight years ago from Casa Grande, Ariz., where he operated a paralegal business. He received a bachelor’s degree in business administration from the University of Phoenix in the early 1990s. Pilkington served in the U.S. Navy from 1976-82 on the USS Hull, where he advanced in the ranks to second class petty officer. The Pilkingtons started a veterans advocacy group, Homeland Heroes, and Pilkington said he has the largest collection of Congressional Medal of Honor medals.

In January 2000, Nye County Public Administrator Bob “Red” Dyer was recalled from office and later served prison time for bribery. Former Public Administrator Bob Jones was robbed at his home by an ex-employee in December 2010; he abruptly resigned the position afterward. The job isn’t paid, but public administrators receive their salary from the administration of estates, typically from taking possession of unclaimed property and auctioning it.

At the Lincoln Day dinner, Pilkington held up an orange sheet of paper, his Operation Orange project, which he hopes everyone in Nye County will post in a prominent location in their home, listing emergency contacts in case of death. If they do, Pilkington said that will drastically reduce the need to contact the public administrator, who only handles estates if the decedent doesn’t have a relative to contact or a will.

He gave examples of what he considers the fleecing of estates. Pilkington said Finlinson is scheduled to appear before Fifth District Court Judge Kimberly Wanker March 18, trying to get paid for handling the $600,000 John Timmerman estate.

“There was an estate that was worth over $700,000 that I did the estate plan for. That should have immediately been handed over to the beneficiary, which was Best Friends Animal Society. Instead, they fleeced that estate for $60,000. There was another estate that was worth $110,000, by the time they got done with it, $11,000 was given to the heirs,” Pilkington said.

Finlinson didn’t respond to a request for comment by press time.

My Paralegal was hired to do paperwork for the former public administrator’s office, but that relationship was severed in 2012 when his firm wasn’t paid, Pilkington said.

Finlinson was the only Independent American Party candidate to win election in 2010, winning by 286 votes over Democrat Donna Jokinen, a slim margin of 51.1 percent to 48.9 percent.

The Nye County Commission asked the attorney general’s office to investigate Finlinson in July 2012. But last month, District Attorney Brian Kunzi said there weren’t any grounds to pursue charges about missing items from estates. He said heirs need to complain in probate court. Amargosa Valley resident Linda Bromell complained about missing items after Barbara Marie McSweeney’s death in May 2012. Last November Finlinson was invited to Spring Mountain Apartments after Riverside, Calif., resident Margie Rigby complained it was a member of the public administrator’s office who notified her about the death of her mother, Mary Dawson.

In January 2013 county commissioners passed a bill requiring more information on the public administrator’s quarterly reports, including a list of estates, name of decedents, the date of death, date the file was opened, the gross value of the estates, money collected and spent.