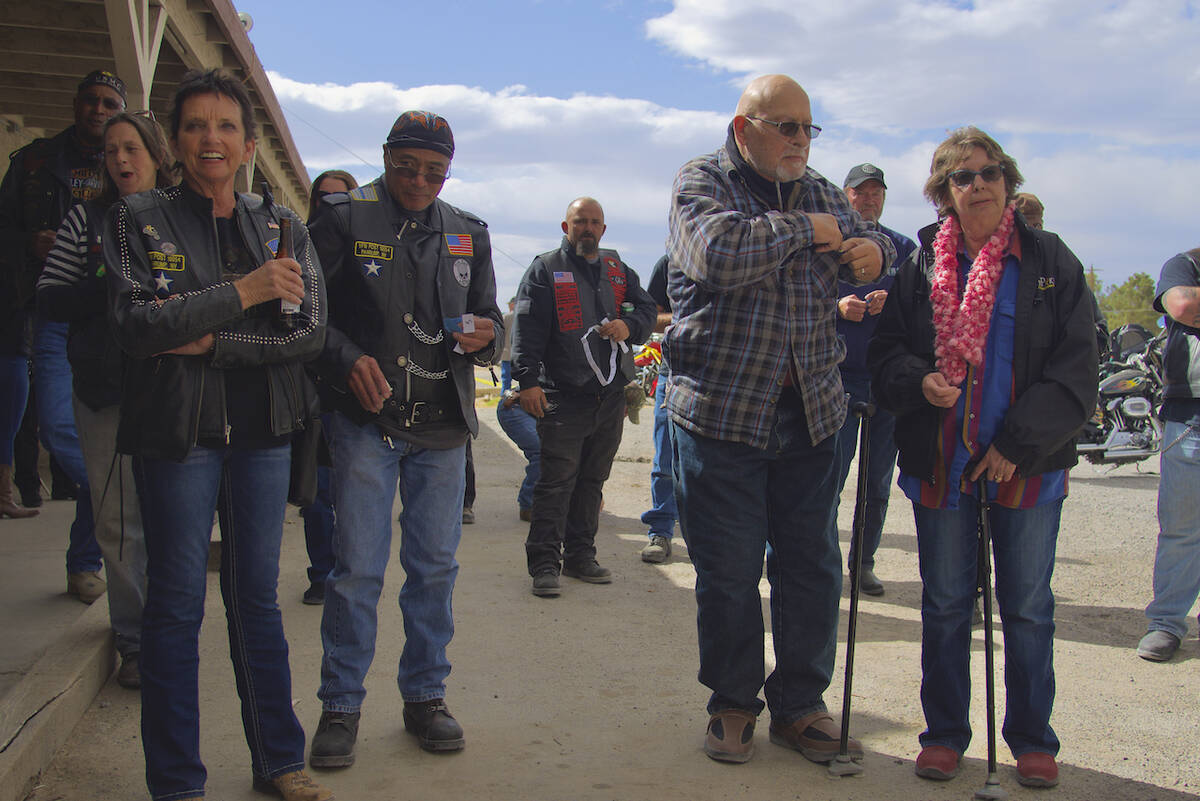 In front of the Bounty Hunter Saloon, participants of the 100-mile run listen for their raffle numbers to be picked. The Poker Run was a fundraiser to help rebuild and reopen Short Branch Saloon, which was damaged by fire in January. (Jimmy Romo/Pahrump Valley Times) 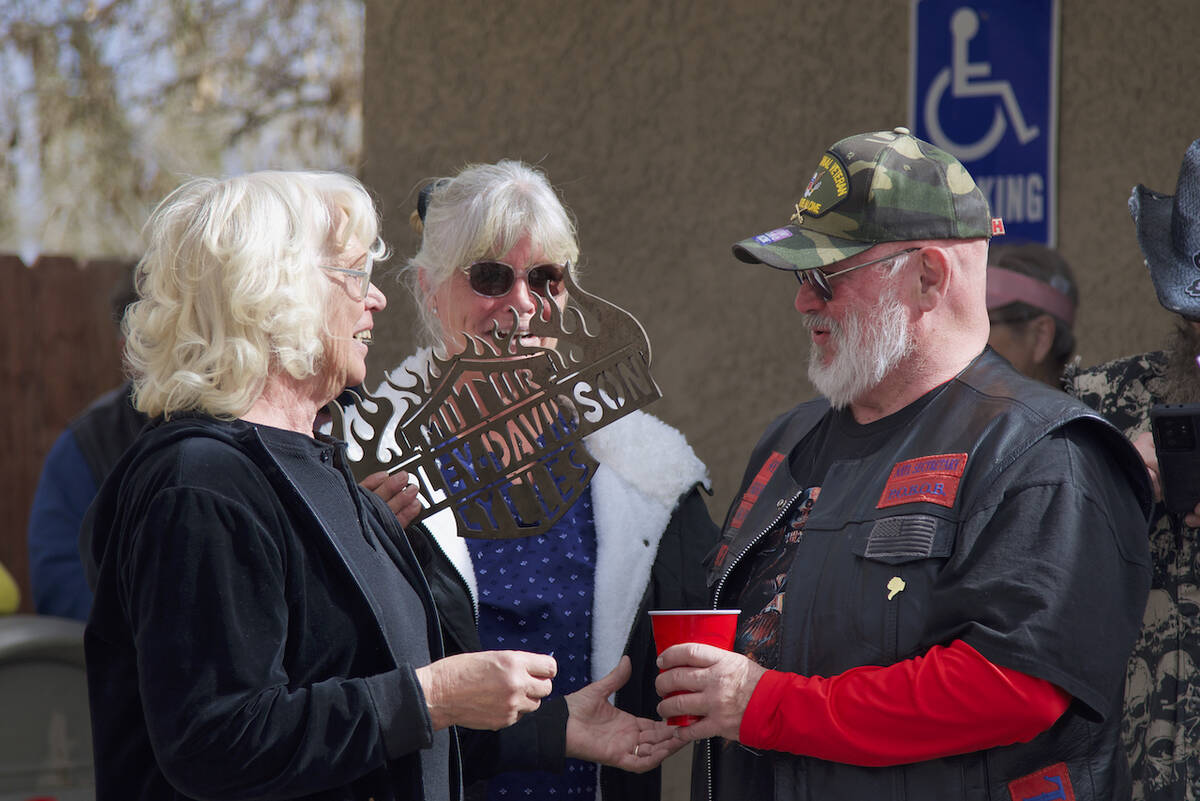 At the 100-mile Poker Run, a raffle winner who received one of the only wall decorations that survived the fire at Short Branch Saloon returned it back to saloon owner Kathy Braggs and her daughter Dawnene Gott. (Jimmy Romo/Pahrump Valley Times) 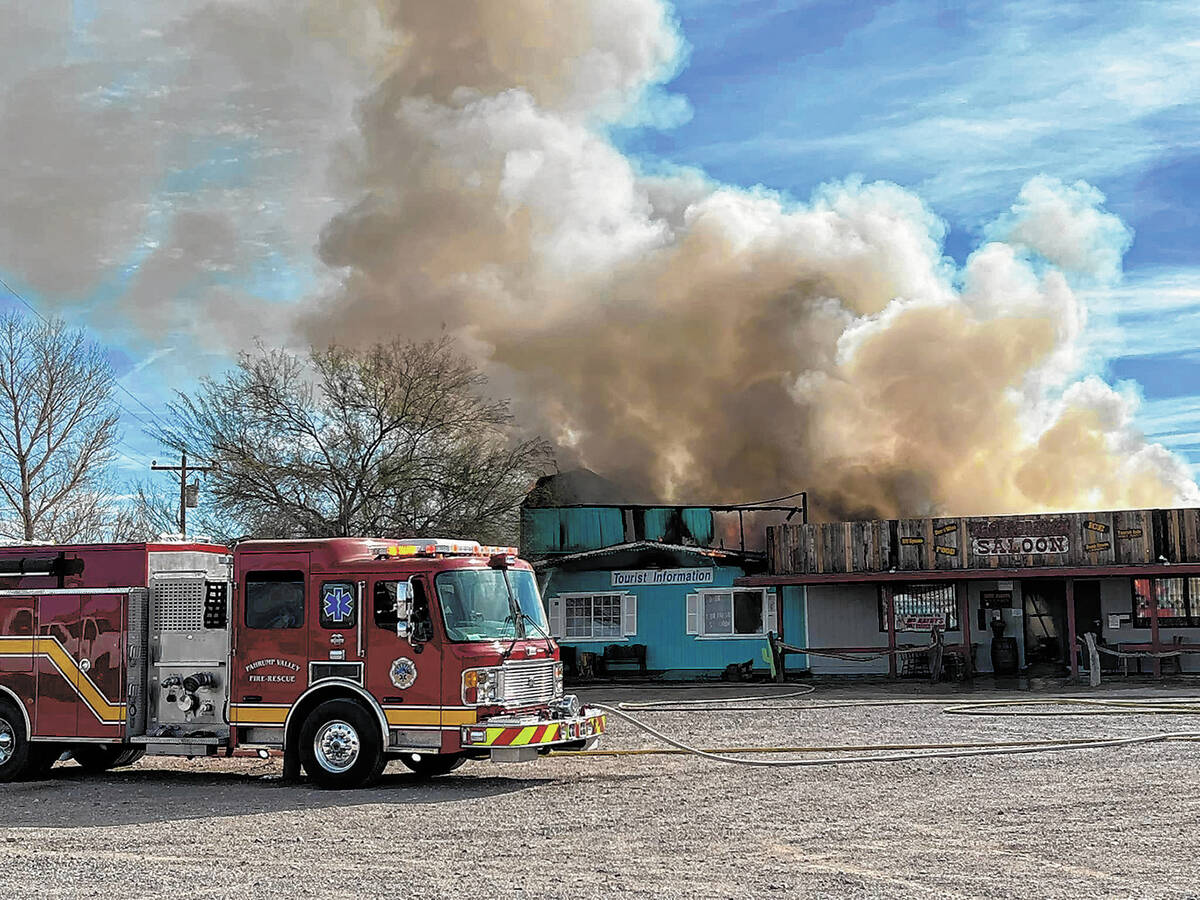 Special to the Pahrump Valley Times The iconic Short Branch Saloon in Crystal was destroyed by fire on Jan. 16.

Nye County motorcyclists and motorists raced about 100 miles across the region on Saturday for a “poker run” to raise money to reopen an iconic saloon.

A network of Western-themed bars in Pahrump and Amargosa Valley banded together this weekend to help fund the reconstruction of Miss Kathy’s Short Branch Saloon in Crystal, which suffered damage from a fire on Jan. 16.

The roof was completely destroyed and its facade is largely all that remains.

The poker run started at Stateline Saloon, in Amargosa Valley, where bikers ate biscuits and gravy for breakfast, before saddling up and traveling more than 40 miles to their second stop: the Veterans of Foreign Wars post (VFW) in Pahrump.

Bikers would arrive there and draw a card in the bar. The bartender would record the card a rider pulled from the deck on a printout to give to players.

After the VFW, bikers went to the Tumbleweed Saloon, then Shenanigan’s Pub, before ending their run at the Bounty Hunter Saloon in Pahrump.

The objective of the run was not to be the quickest, but to get the best poker hand, said Ruthie Edwards, bar manager of the Bounty Hunter and coordinator of the poker run. Riders were tasked to get the best hand in order from cards drawn at each bar to win prize money: $200 for for first place; $100 for second place.

At 3 p.m., Edwards announced the rider with the best hand: Wayne Johnson, with three aces.

When asked what Johnson would do with the prize money, he said he’d be topping off his truck with diesel with the way gas prices were looking. He said it was important that he came out to support this special poker run as a large portion of the funding would go to the rebuild of the Short Branch Saloon.

The Bounty Hunter Saloon had live music, a barbecue, and a raffle for those who participated in the run. In the raffle was a gift Bragg received from a patron of the saloon, a Harley Davidson sign that a man fabricated as a departing gift. This sign is one of the few things that survived the fire and hung between the bar and the kitchen.

Patrons would make Bragg offers for the sign, but it was too sentimental for her to sell it. After the fire, she thought the raffle was the time to give them a chance to win it.

One patron won the sign and gifted it right back to Bragg for when the bar opens up again. They hugged and she thanked him for letting her keep the sign.

Bragg said her family and friends have supported her following the fire. Her grandchild helped start a GoFundMe account for the bar and has raised more than $10,000.

Bragg’s daughter Dawnene Gott says it’s only a fraction of what they need to fully rebuild the bar.

“That’s her whole life,” Gott said. “It’s her therapy and she’s not ready to quit.”

To help support the rebuild of the Short Branch Saloon, click here for a link to the GoFundMe page.