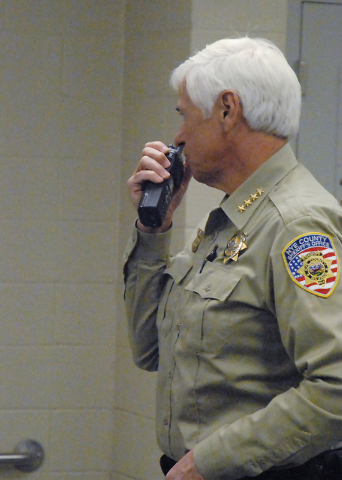 After more than eight years of planning, testing and improving radio communications within Nye County, the sheriff’s office officially switched over from analog to digital dispatch channels last week.

“Digital gives us the clarity we need and cleans up some of the issues with analog. I told the county commissioners it’s like the difference between AM radio and FM radio – if you go under say power lines you get a lot of static from AM, but that doesn’t come across in the FM channels. So there’s a difference in the clarity and the type of resilience of the channels. Digital is a very resilient technology for dispatching,” he explained.

Plans for improvements started in 2005 when officials signed a lease purchase agreement with Motorola for $3.59 million.

In July 2013 county commissioners approved a plan laid out by the county’s IT department to move to a digital dispatch system for the sheriff’s office in order to increase coverage, improve audio quality and prepare for future upgrades required by the federal government.

In December 2013, commissioners additionally approved a $264,861 contract with Motorola for a lease purchase of 35 digital portable radios and 50 high power mobile radios for the sheriff’s office.

Since their approval for the purchase of new radios, the county’s IT department has been working to improve signal strength on the digital channels throughout the county.

So far DeMeo said the new dispatch channels are working well. He said his officers have better call strength in buildings and other areas of the county where before they couldn’t use their radios at all.

Nye County Director of IT Milan Dimic said so far the only areas they have not been able to convert to digital are in the far northern parts of the county.

“We have not yet been able to convert to digital in the far northern parts of Nye County. However, all NCSO personnel now carry radio equipment capable of both digital and analog communications. The dispatchers are also listening to both types of transmissions so there is no loss of communications across Nye County. As to the coverage issue, we actually lost about 15 percent coverage when we completed the federally mandated ‘Narrow Banding’ project almost two years ago. The new digital system buys back that coverage and about 5 percent additional in some areas. We are anticipating that by October 1 of this year, all NCSO communications will be digital,” he stated in an email.

The only other issues they have had since the sheriff’s office switched over to the digital system last Monday have to do with officers getting used to the new system.

“The only issue so far has been more a matter of getting used to the new system. Under a digital system, you need to do some things slightly different, such as when you ‘key up.’ Under analog you could begin speaking almost while you were ‘keying up.’ Under digital, you need to wait a half a second until you are fully ‘keyed up’ to begin speaking. These are just the types of things that we expect, within a week or two, everyone will adjust. These little changes in operation are far outweighed by the benefits that the digital system provides,” Milan said.

Despite rumors that the sheriff’s office moved from the old analog dispatch channels to new, encrypted digital ones — which would mean even those with digital scanners could not hear local dispatch traffic — Dimic said that just isn’t true.

“We are not now, nor do we any plans for the future, to run any encryption on our digital radio system,” he said.

Milan explained that moving over to an encrypted channel would just make things more complicated for not only the IT department, but the sheriff’s department as well.

The IT director said anyone with a digital scanner should be able to pick up local dispatch traffic.

DeMeo said while he understands members of the community like to listen to the scanners to know what’s going on in their community, his priority is to provide a safe and reliable means of communication for his officers on the streets.

“While I understand some people may be upset they have to buy new scanners to continue listening to dispatch, the most important thing is to provide clear functioning communications for use by emergency services personnel,” he said.