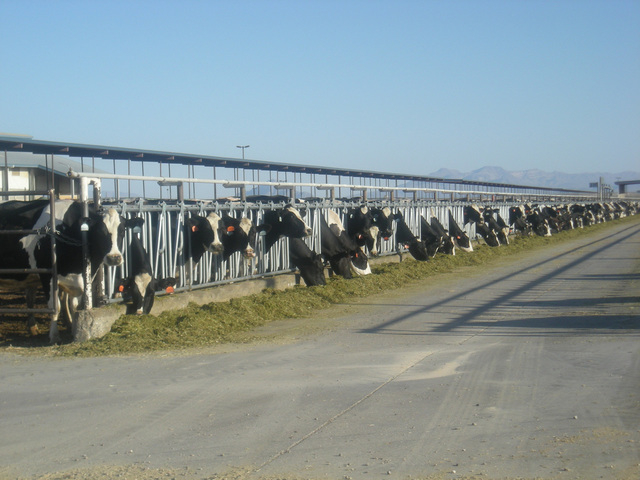 AMARGOSA VALLEY — The Ponderosa Dairy applied for a permit with the Nevada Division of Environmental Protection to continue discharging dairy manure and process waste water into the surface and groundwater for another five years.

Ponderosa Dairy has been in operation since 1993. Owner Rockview Farms, based in Downey, Calif., applied for a National Pollutant Discharge Elimination System permit. The permit was first issued in June 2000. With over 9,000 cows, the NDEP notice said the Ponderosa Dairy is classified as a concentrated animal feeding operation, which requires the facility to contain all manure and process waste water from the production area, except overflow resulting from a storm greater than the 25-year, 24-hour event.

On the basis of a preliminary review of the requirements of Nevada Revised Statutes and regulations, the NDEP administrator is proposing to issue the permit.

Amargosa Valley Town Board member John Bosta, who said he filed a protest with local resident Tony Guerra over the renewal of the discharge permit, doesn’t plan to protest now after one of his six points of contention were granted by the state engineer, requiring the installation of five monitoring wells. Bosta said agricultural interests packed the hearing.

“We asked why the animal waste is not treated the same as human waste. The environmental commission refused to hear it,” Bosta said.

One of the monitoring wells showed a high level of nitrates that the dairy was given two years to work with before the permit renewal process, he said.

“We didn’t think we would protest because the dairy was following what the state environmental commission told them to do. In this new monitoring, there’s no evidence of any pollution,” Bosta said.

Bosta said dairy officials told Amargosa Valley town board members they were planting more acreage in alfalfa to cut feed costs. He said the dairy had at one time 16,000 cows and he’s heard there were as few as 8,000 cows now.

“The dairy has been community minded. This year we had to replace tires on our fire engines and the dairy assisted us in that process. They’re here in the community and they try to be a good steward here in the community. A lot of people don’t give them credit when credit should be due,” Bosta said.

Anyone who wants to comment on the discharge permit can request a hearing pursuant to Nevada Administrative code by 5 p.m., June 23.

They can be sent to the Department of Conservation and Natural Resources, Division of Environmental Protection, Bureau of Water Pollution Control, 901 S. Stewart St., Suite 4001, Carson City, Nev. 89701.

Anyone protesting has to state their interest in filing the request and why a hearing is warranted.

If a hearing is granted, NDEP will issue a public notice 30 days before the hearing date. If no hearing is held, the NDEP administrator will give public notice of any revised determinations.

Information on the application may be obtained by writing NDEP or contacting Michele Reid, Bureau of Water Pollution Control, at 1-775-687-9434 or at mreid@ndep.nv.gov, the fax number is 775-687-4684. The fact sheet can be viewed online at ndep.nv.gov/admin/public.htm.