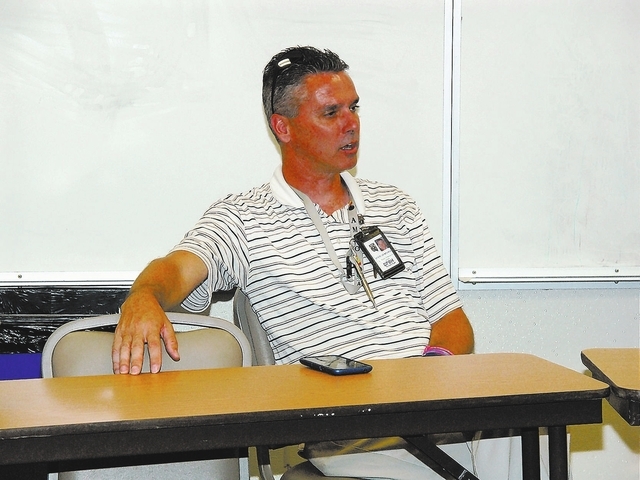 A renewed effort is underway to address an alarming trend among this country’s military veterans.

A recent study conducted by the Department of Veterans Affairs on suicide among military veterans shows more veterans are taking their own lives on a larger scale than previously thought.

The study covered suicides from 1999 to 2010. Compared with a previous VA estimate, there were roughly 18 veteran deaths a day in the United States.

More than 69 percent of veteran suicides were among men and women 50 years of age or older, the VA reported.

With a large number of veterans living in Nye County, area representatives and volunteers are working to provide emotional support and treatment closer to home.

At present, resources for troubled veterans in Pahrump and Nye County are limited.

Richard Egan is a facilitator for Nevada Suicide Prevention and Outreach program from Las Vegas.

Egan was in Pahrump on Friday to present a roundtable discussion on crisis prevention for local veterans.

One chief topic of discussion touched on identifying the signs of someone who is at risk for suicide and how it can be averted.

“This is a treatable condition by making sure that our community members and people understand that this is like saving the life of a man who is having a heart attack. If you know what to look for, you can actually make a difference in somebody’s life because all of the signs are there. If you have the training to intervene or recognize the signs and get that person to somebody that can intervene, that is the key because we can save a lot of people,” Egan said.

Nevada is presently ranked number four in the nation when it comes to suicides after holding the number one position for many years.

Heather Shoop, chair of the Nevada Coalition for Suicide Prevention, noted that prevention efforts from various federal and state organizations over the years have been responsible for reducing the number of suicides in the Silver State.

“Even during the economic downturn that we have had for the past several years in Nevada, we were still able to bring us out of number one. There’s a lot of good work that is being done but we can always use more,” she said.

Egan, meanwhile spoke about certain “triggers” that may be the “last straw” for an individual thinking of suicide.

He said studies indicate that the most promising way to prevent suicide and suicidal behavior is through the early recognition and treatment of depression, PTSD, and psychiatric illnesses.

“It’s not just one thing that will take you there. Loss of a job may not be the trigger. A divorce may not be the trigger, but the trigger may be a combination of those for any individual and every individual is different and that’s why suicide can reach any person in society in all walks of life. We have all heard stories of people who have suicided that were from a homeless existence, to middle class, to being on top of the world,” he said.

Abnormal behavior Egan said is another important warning sign that an individual is bent on killing themselves.

Those behaviors include giving away personal items, appearing withdrawn or isolated and looking for ways to kill oneself by seeking access to firearms or other means.

Egan cautioned that not everyone who is considering suicide actually shares their true thoughts with others.

“They normally will not actually come out and tell you. They will tell you that they are ‘done’ or ‘finished.’ They have a plan and it’s all going to be better. Those are the kinds of signs or things that the person will say to a family member, a friend, a neighbor to maybe try to get them to engage in the conversation because they want to talk about it but they also want you to ask about it,” he said.

On Saturday, a Walk in Memory and Walk for Hope is scheduled at Ian Deutch Memorial Park from 9 a.m. to noon.

The walk is part of the Healthy Family Festival sponsored in part by Americorps, NyE Communities Coalition (NCC) and Southwest Medical.

NCC’s Tane Owens is a representative of VISTA (Volunteers In Service To America).

He said the event is open to the entire community.

“The walk is hosted by the Nevada Coalition of Suicide Prevention. Saturday will be the third year that Pahrump has hosted it. It’s a way to raise awareness for suicide prevention in the area. It’s entirely free to walk but donations are always welcome and all proceeds will go to the suicide prevention coalition. Anybody who has been affected or wants to show support to those who have been affected are welcome to join in,” he said.

The need for volunteers to assist in suicide prevention is also dire.

Egan said those who are interested may take part in regional “SafeTalk” training classes offered by the suicide prevention coalition.

Though efforts are underway to provide classes in Pahrump, the next training session will be held in Las Vegas on Nov. 14.

“SafeTalk is a free three-to-four- hour training class that provides practical skills necessary to identify a person with thoughts of suicide and connect them to help. You can expect to leave SafeTalk more willing to and able to perform steps that contribute to saving lives,” he said.

Local veterans who have thoughts or feelings about suicide are urged to call the Veterans Administration National Crisis Hotline at 1-800-273-TALK ext. 8255.