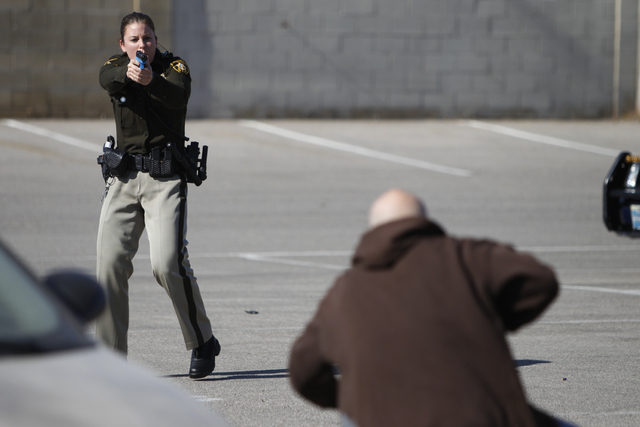 Nye County Sheriff Sharon Wehrly said she fully supports a proposed state Assembly bill requiring the use of body cameras for on-duty deputies despite the fact that her department budget has been slashed in recent weeks.

Cost seems to be the one obstacle to Nye County’s use of the cameras, with cameras ranging in price from $99 through $599 each. That would saddle the department with a hefty bill to outfit its 77 patrolling officers with a unit. The legislation, if passed in its current form, would also apply to the department’s 26 correction officers, who Nye County Assistant Sheriff Richard Marshall said are deemed peace officers that are authorized to carry a weapon and effectuate an arrest.

Wehrly said that if the Nye County Commissioners chose not to follow the state mandate, if passed, they could request a waiver from the state based on financial hardship and come into compliance when money to purchase the cameras becomes available.

Grant funding from the Department of Justice or other state and federal agencies may be available to pay for the cameras.

Wehrly has initiated cost-savings measures within the department, in addition to researching the viability of new revenue streams to replace $992,000 in cuts approved by the Nye County Commission on March 3. In addition to program and service cuts, each of the department’s employees will be required to take one furloughed day per month to help offset the county’s $2.5 million revenue shortfall. Measures are being taken, she said, to ensure a high level of public safety by addressing staff shortages with staggered shifts.

The department’s commitment to public safety and transparency are just two of the reasons Marshall advocates for the body cameras. “It is for the protection of the officer and the members of the public,” he said. “Whenever you are dealing with the public, you are dealing with taxpayer funds and millions of dollars are paid out in lawsuits every year. This (body camera use) would mitigate that.” Use of camera data could be used to refute false claims against or by officers, he said.