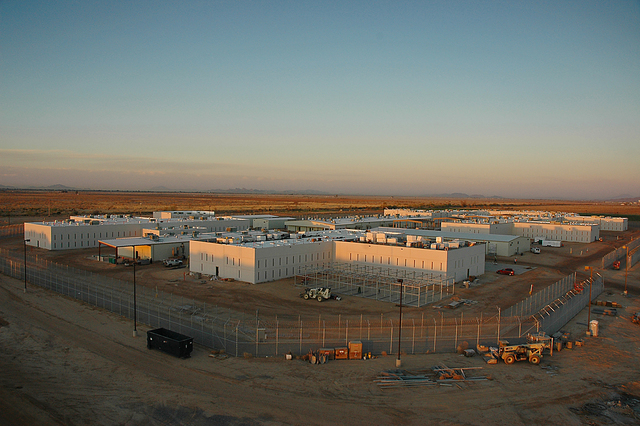 A federal prosecutor has admitted that she inadvertently obtained recordings of confidential jailhouse phone conversations between a bank robbery defendant and his lawyer at the Nevada Southern Detention Center in Pahrump. Special to the Pahrump Valley Times

A federal prosecutor has admitted that she inadvertently obtained recordings of confidential jailhouse phone conversations between a bank robbery defendant and his lawyer.

In court papers last week, Assistant U.S. Attorney Alexandra Michael said the attorney-client conversations were in a batch of recordings of the defendant, Robert Kincade, that she had subpoenaed from the Nevada Southern Detention Center in Pahrump.

She said she turned over copies of all the recordings to the defense without listening to them and learned afterward that some involved phone conversations between Kincade and his lawyer, Kathleen Bliss.

The defense attorney raised concerns in court papers last week that the privately-run detention center was violating Kincade’s constitutional rights to a fair trial by providing prosecutors with recordings of her phone conversations with him.

Bliss, a former federal prosecutor, cited the alleged attorney-client breaches in a motion to dismiss the robbery case against her client because of government misconduct.

The government has yet to respond to the motion, but Michael addressed Bliss’ concerns about the recordings in her own motion opposing a defense subpoena request for all communications between the government and the detention center related to Kincade’s case.

Michael said she learned that all inmates at the Pahrump detention center are told when they arrive that they must provide the phone number of their lawyers so that officials won’t record phone conversations with the lawyers.

“Therefore, it would be fair to assume the defendant had not provided defense counsel Bliss’ phone number to the facility, as required, in order to avoid said calls being recorded,” she wrote.

“Assuming that there may have been something in place at the Nevada Southern Detention Center relative to telephone calls with counsel, there is a far more disconcerting issue that the government ignores,” she wrote. “The government knew that Mr. Kincade was represented by counsel and yet compelled the NSDC via a subpoena filed under seal to produce all calls made by Mr. Kincade solely for the purpose of trawling through those calls in the course of its ongoing investigation and in preparation for trial.”

Concerns about recorded phone calls at the Pahrump facility, run by Corrections Corporation of America, go beyond the Kincade case.

Federal public defenders for one of the defendants in the Bunkerville standoff case also filed court papers last week suggesting that their phone conversations with their client, Ryan Payne, were being recorded.

Payne, a militia leader from Montana, is one of 17 defendants, including Bunkerville rancher Cliven Bundy and four of his sons, charged with conspiring to assault Bureau of Land Management agents April 12, 2014.

His attorneys said hundreds of federal inmates at the Pahrump facility might be affected by improper recordings, and they asked a judge to appoint a special master to determine whether the practice is widespread. Amid the furor over the jailhouse recordings, prosecutors last week filed a new indictment against Kincade, charging him with a series of bank robberies between 2011 and 2014. He faces charges of bank robbery, armed bank robbery, interference with commerce by robbery and brandishing a firearm during a crime of violence.

Corrections Corporation of America, which operates federal detention centers across the country, has been lambasted by federal judges for invading the privacy of inmates at some of the company’s other facilities, according to Bliss and Payne’s lawyers.

A spokeswoman for the Nevada Southern Detention Center could not be reached for comment Monday.