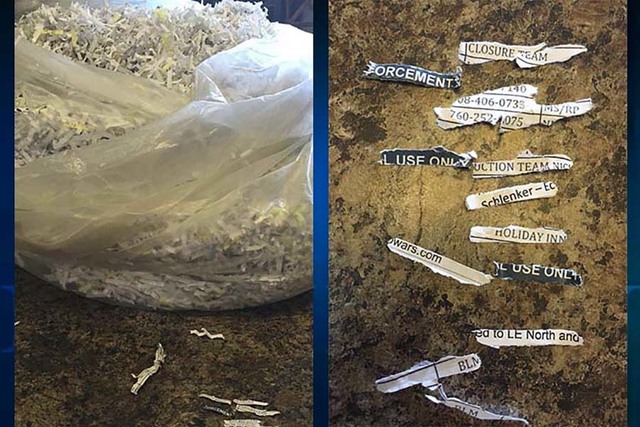 These shredded Bureau of Land Management documents were recovered by Ammon Bundy’s defense team after the Bunkerville standoff in April 2014. Courtesy of Keith Gordon

Bureau of Land Management agents shredded sensitive documents about their roundup of Bundy family cattle in the tense hours before their April 2014 standoff with armed Bundy followers, federal prosecutors have confirmed.

In court papers late Wednesday, prosecutors said the hurried shredding occurred as agents at the impoundment site feared they were in imminent danger and about to be overrun by a crowd of angry Bundy supporters.

The shredding began the evening of April 11, 2014, and continued until BLM agents were forced to abandon the impoundment camp the next morning, BLM Agent Kent Kleman wrote in an accompanying four-page affidavit.

Among the items shredded were copies of the impoundment operations plan, maps and papers containing cellphone numbers and personal information about government employees and contractors involved in the roundup, Kleman said.

The destruction of the documents was necessary to “prevent disclosure of law enforcement sensitive information to persons engaged in criminal activity,” prosecutors wrote in their court papers.

Some 400 cattle were being held at the site, which was several miles from the Bundy ranch near Bunkerville. They were rounded up under federal court orders because the Bundy family had failed to pay hundreds of thousands of dollars in grazing fees to the BLM.

Hundreds of militia members and Bundy followers from across the country had gathered to oppose the roundup, outnumbering the federal agents involved in the operation.

Less than two years later, rancher Cliven Bundy, four of his sons and 14 others were indicted by a federal grand jury in Las Vegas on an array of charges, including conspiring to assault the federal agents on April 12, 2014. Two of the defendants pleaded guilty, and the rest are to stand trial on Feb. 6.

Prosecutors revealed the frantic shredding effort leading up to the standoff in papers responding to a defense motion by Dan Hill, who represents one of the leaders of the alleged assault, Cliven Bundy’s son Ammon.

Hill said in his motion that his defense investigator, Keith Gordon, had obtained bags of shredded evidence left behind by the BLM, and Hill sought to dismiss the charges against his client on grounds it amounted to the destruction of evidence in the criminal case.

But prosecutors responded that the dismissal is unwarranted and that Hill failed to establish that he has been unable to obtain copies of the shredded documents from other sources.

They also argued in their court papers that the shredding occurred because the BLM agents did not want the information to fall into the hands of people who had threatened them. It was not done to withhold evidence in a criminal case put together nearly two years later, they said.

In his affidavit, Kleman added that the shredding was “not conducted in bad faith or to hide exculpatory information that would have been useful to the defense.”

Kleman said agents had a duty as law enforcement officers to keep the internal documents from the Bundy forces as tensions mounted during the confrontation.

“Such information was contained in the confidential operational plan from the impound, which is a master planning document of the operation that included not only details of how the government planned to carry out the cattle impound but also included detailed personal information of the government employees and contractors who planned and participated in the operation,” Kleman said.

Hill offered a different opinion in an interview Thursday.

“The government’s nonchalance about the destruction of evidence is just the latest travesty in this case,” he said. “In this country, you have a right to see the documents made by the people trying to put you in prison. The government shouldn’t get a pass for shredding papers and notes that just might have shown that Ammon didn’t do anything wrong.”

The shredding effort comes on the heels of another unusual government disclosure in the high-profile case.

Prosecutors confirmed last week in court documents that undercover FBI agents posed as a documentary film crew to gather evidence during their investigation into the Bunkerville standoff.

Defense lawyers who have seen FBI reports of the undercover operation have said in court documents that the company’s name was Longbow Productions.

Several of the defendants charged in the case, including Ammon Bundy, were tricked into doing interviews with the undercover agents before they were charged, defense lawyers have alleged.

Prosecutors contend the ruse was a proper investigative technique.