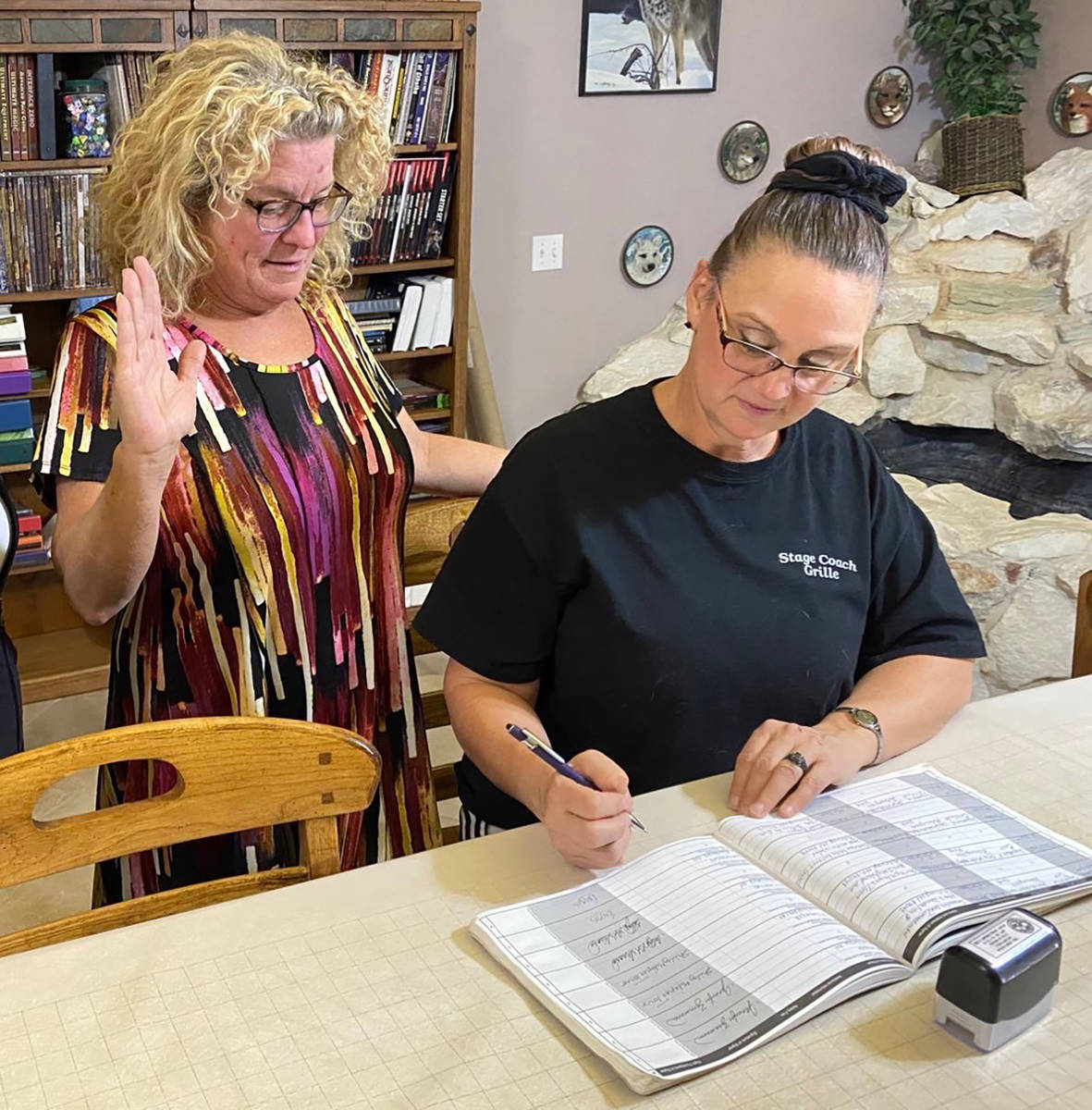 Established in late August, Battle Born Patriots is a political action committee formed in the wake of the failure of another attempt to recall the governor, that from a group entitled Fight For Nevada. By Sept. 3 Battle Born Patriots had submitted its notice of intent to recall and just two days later, Nye County volunteers started gathering the signatures of local voters in support of the statewide endeavor.

Heading the charge locally was Battle Born Patriots Nye County leader Dee Mounts, who worked continuously over the recall period, securing petition signing locations all over the county and recruiting and organizing a band of volunteers to man the recall tents. Now, her hard work is at an end and she, along with the many others involved in the group, is awaiting the results of the signature verification process that will determine if enough valid voters’ signatures were collected for a successful recall.

“Yesterday was the last day for signing petitions in Pahrump. We’re having a notary and copying party tonight. Beatty was all done last week and my Tonopah team is notarizing I think on either on the 29th or 30th,” Mounts told the Pahrump Valley Times on Monday, Nov. 23. She said the Nye County volunteers were planning to turn in all of their petitions containing signatures of Nye County voters simultaneously on Dec. 1 to the Nye County clerk’s offices in Pahrump and Tonopah. “Other counties in Nevada are scheduling their own notary parties on different days,” she added.

As for how the recall effort went overall, Mounts said she was very proud of the dedication and passion shown by those who lent a hand not only in Nye County, but in the the entire state as well.

“We started out with a bang. Team Nye was raring to go when we dropped the petition on Sept. 5. Through 110 degrees, dehydration and heat exhaustion to high winds and cold temperatures, we’re a group of driven Americans who want to save our state,” Mounts said. “Meeting residents was our favorite part of the recall. Hearing their stories of suffering from Sisolak’s ‘directives’ would make a person cry, maybe even give up. But somehow it drove us more, we wanted to help our town as much as possible.”

Mounts said the most frustrating part of the recall process was the requirement that only those who actually participated in Nevada’s 2018 midterm elections, when Sisolak was elected as governor of the Silver State, could put their name to paper and sign the petition. “We turned away hundreds if not thousands who didn’t vote in that election and, in turn, couldn’t sign,” Mounts lamented. “The people were visibly upset too.”

The process was further complicated, Mounts detailed, by threats as well as a general amount of confusion regarding the nature of what the group was aiming to accomplish. “We were threatened and harassed by liberals who didn’t know who or what was going on,” Mounts said. “They didn’t know what ‘recall’ meant. We explained that ‘recall’ essentially means to fire someone. It’s not a Republican or Democrat issue, it’s about Sisolak’s actions, and those actions and illegalities don’t belong in our Silver State. He must go.”

However, Mounts noted there was an incredible amount of support for the group as well and she was touched by that support.

“Throughout the 90-day recall, we were repeatedly thanked, some brought us water when it was hot, and others became regular visitors at our recall tents,” Mounts stated. “Community is a beautiful thing, even during this mess from our governor.

Now, Battle Born Patriots is entering a “sit and wait” period to see what the results of its effort will be. The group has quite a tall order to fill, with a total of 243,995 signatures required to push through a successful recall. Just under 32,000 signatures had been collected as of the halfway point in October, according to information from the Nevada Secretary of State.

The deadline for the petition signature drive is Thursday, Dec. 3. After all petitions have been notarized and turned in, the signatures will need to be verified and the results of the recall effort will be released once this process is complete.