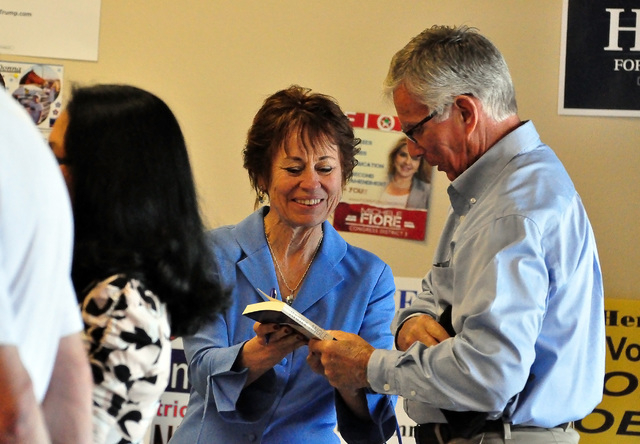 Republican candidates from several races across the state sought support of Nye County voters during a meet-and-greet on Saturday.

During a three-hour event that took place at the Nye County Republican Central Committee headquarters in Pahrump, Republicans who seek seats in Nye County’s districts I, II and III spoke about their agendas and backgrounds.

They were joined by Republican candidates for Nevada Assembly District 36 and the U.S. Senate.

Nevada Assembly District 36 candidate Tina Trenner, who has been building up her grassroots campaign, spoke at the event.

“It’s really just a great experience going out talking to people,” said Trenner, who has been actively canvassing neighborhoods in the vast Assembly District 36.

Trenner is the main opponent of incumbent Assemblyman James Oscarson. She said she is dedicated to protecting domestic water well owners’ rights and fighting back taxes.

Incumbent commissioner Donna Cox, who is running for re-election this season, spoke about Nye County commissioners’ accomplishments within the past couple of years.

Cox said she has a vested interest in Nye County.

She called herself “a true conservative” and said she is making sure that the budget is “watched” and taxes “are not going up.”

“I really know in-depth what the issues are,” he said.

He said some of the biggest issues in Nye County are budget, attraction of new business and water.

An accountant and business owner from Amargosa Valley, Scott Mattox, who is running for Nye County Commission District I, called for “better” taking care of seniors and veterans and prioritizing the county’s budget. He said rural roads have become one of his chief issues since he launched his campaign.

Sharron Angle, who unsuccessfully challenged Democrat Harry Reid in 2010, is again seeking nomination from the Republican party for the U.S. Senate.

“We do need citizen representatives, not career politicians, that’s what we need,” Angle said in her speech.

Angle told the Pahrump Valley Times she hopes to get support from Nye County voters in the upcoming primary.

“Every vote is important. I’d like to have everyone’s vote in Nye County,” she said.

“Our economy is depressed, we need someone who’s interested in deregulating government and making sure that we can offer an atmosphere for business to grow not only in the state but also across the nation,” she said.

In his address to the audience, Tarbell said he will stick to the Republican principles, if elected.

Tom McAllister, political campaign director for Dr. Joe Heck, the Republican congressman and frontrunner in the U.S. Senate race, spoke on behalf of Heck at the event.