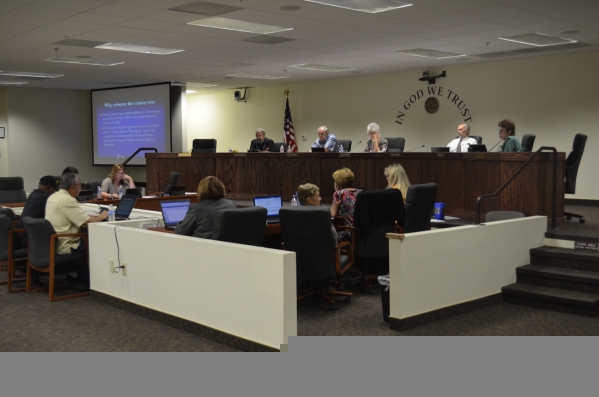 A Pahrump resident wants to pursue his idea to move the county seat to Pahrump even after officials exhibited little enthusiasm for his idea.

In his 10-minute presentation to Nye County commissioners on Tuesday, Andy Alberti argued that moving the county seat to Pahrump would allow it to reduce costs, improve efficiency and increase government accountability and transparency as the county would consolidate offices located in two towns.

“I can’t imagine why we don’t do it,” he said. “It looks like these commissioners don’t care how much money they spend which they don’t have,” Alberti said after commissioners showed tepid support for his request to place a referendum on the ballot for the next general election in November 2016.

The plan didn’t include the cost analysis, however. If the proposal is given proper attention and put on a ballot, Alberti said he would investigate how much money it requires.

To back up his argument, Alberti said the county seat has been historically put in the most populous locales.

According to County Planning Department data for the first quarter of 2015, the population of Pahrump came close to 39,000 — more than two-thirds of the county’s total population that was slightly over 47,000. The population of Tonopah is teetering just above 3,000, records show.

Alberti claims some of the consequences of having a county seat in Tonopah instead of Pahrump include higher tax rates, higher overhead costs, opportunities for waste and corruption, less transparency in county affairs, difficulty in managing programs and ineffective utilization of county employees.

“This can not be your best way to serve the population,” he said. “Moving the county seat resolves this problem and gives families in stress personal contact with those who are supposed to help us.”

County board Chairman Lorinda Wichman said Nye County is the only county in the U.S. that provides two separate seats of the government both operated by the county because of its size.

Moving the county seat has nothing to do with population, Wichman said. Closing Tonopah offices in turn would mean that residents are going to have to travel 300 miles to record documents in Pahrump.

Commissioner Dan Schinhofen said staffing in Tonopah had already been cut to the bone.

“I can’t see (that by) moving the county seat that we are going to be able to close any more offices up there because above Tonopah, which is in the middle of the county, not in the north, is people that need to be served,” he said.

To go forward with the issue, Alberti would have to get 60 percent of Pahrump property owners to sign a petition which would allow it to go on a ballot, according to state law.

“I really don’t see that thereâs a big push by the public to do this, but prove me wrong, get 60 percent of the people who voted in the last election or also property owners and Iâll be happy to hear this,” Schinhofen said.

“If we were to put this on the ballot, it means we can’t do anything with it. The court board of commissioners canât do a darn thing with it and neither can the state legislators because you would be asking voters to vote on this item and some of them may not be qualified because they have to be property owners as well,” Wichman said. “You can go collect petition signatures from 60 percent of the qualified voters in Nye County who are also property owners, so when you have the petition and youâve done all of them, then we can do it.”