Richard Stephens/Special to the Pahrump Valley Times More than a dozen people attend the Beatty Town Advisory Board Meeting on Monday, July 26, 2021. 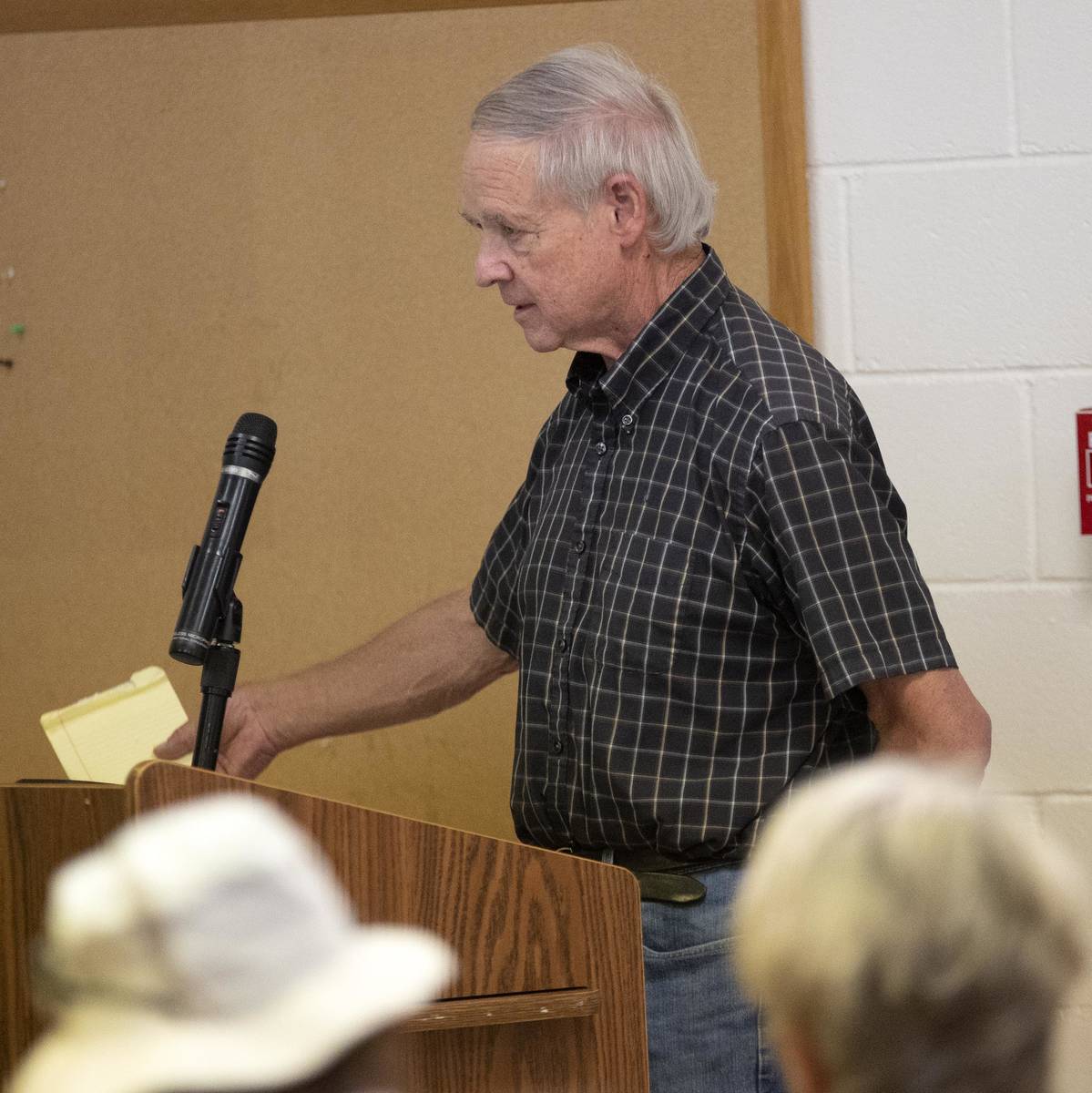 Richard Stephens/Special to the Pahrump Valley Times Albert Verrilli, Beatty Water and Sanitation District board member, defends colleagues after push by another board member to recall Amina Anderson and Jeannie Ybarra. 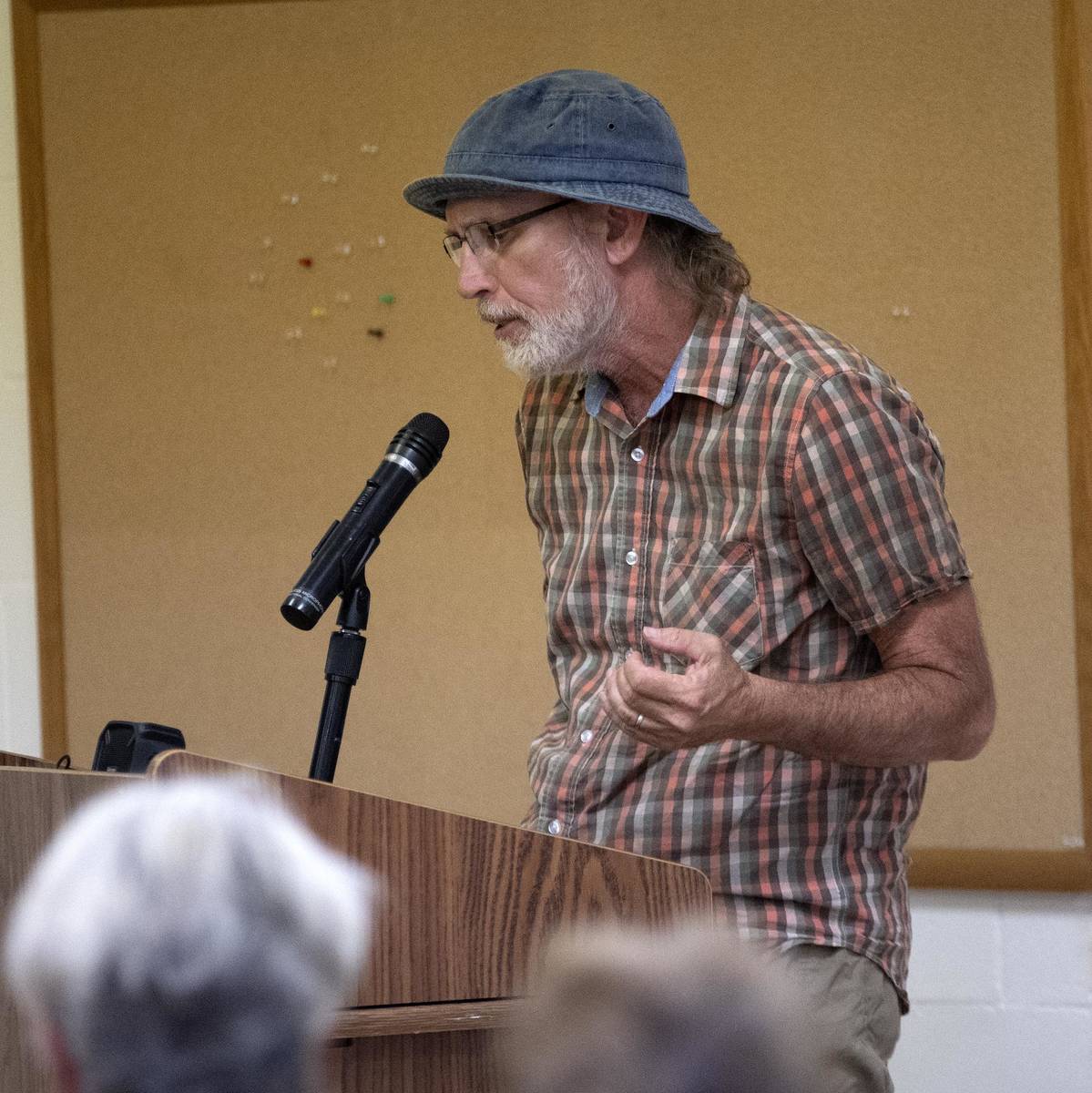 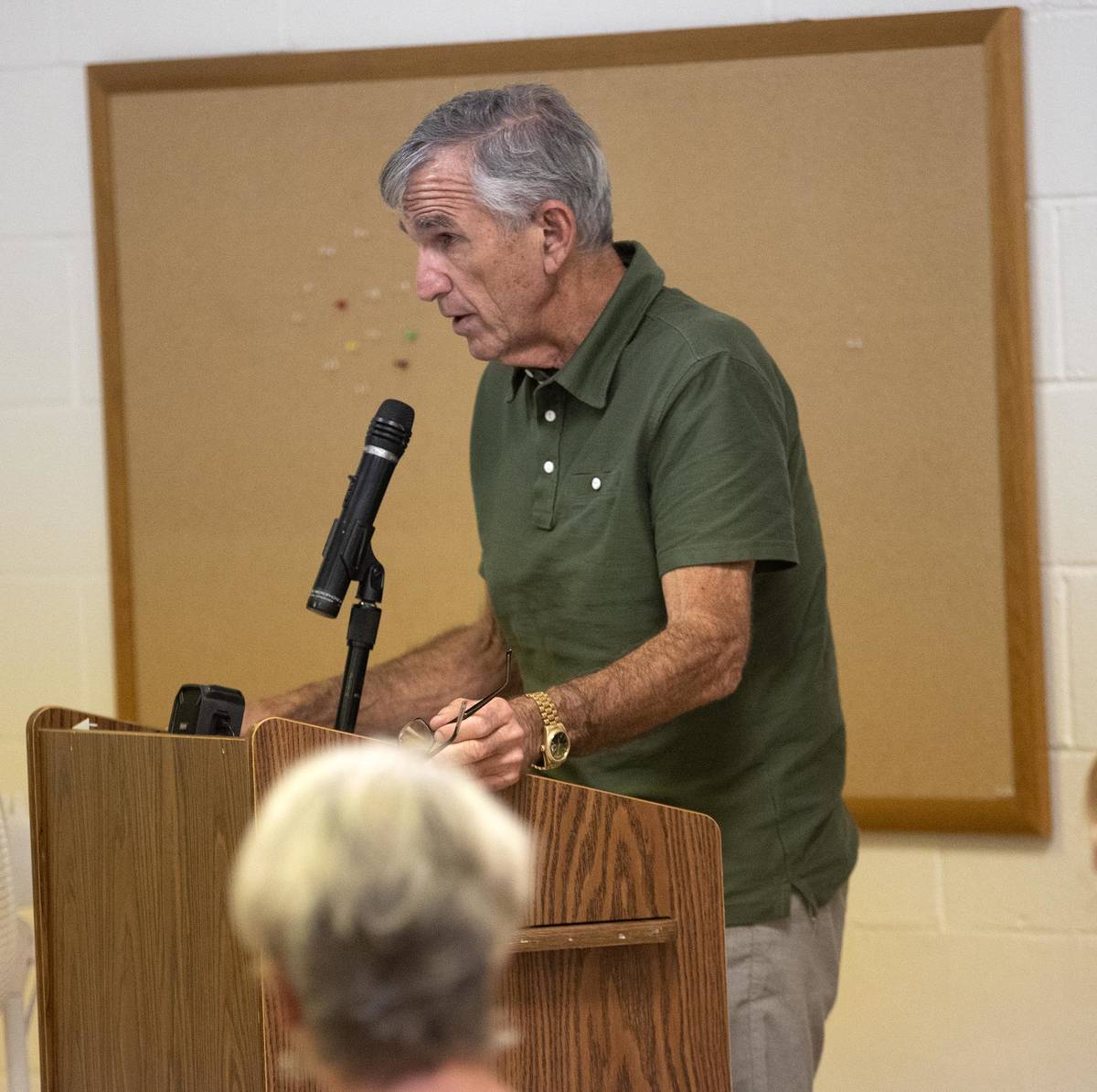 Richard Stephens/Special to the Pahrump Valley Times Ed Ringle, businessman and Beatty Water and Sanitation Board of Trustees member, announced his aim to start a recall petition for two of his colleagues during a Beatty Town Advisory Board meeting on Monday, July 26, 2021.

In a presentation at the Beatty Town Advisory Board July 26 meeting, Ringle said that two members of the board—Amina Anderson and Jeannie Ybarra—are “nice people,” but that they are “in over their heads” and lack competence. Ringle himself has served on that board.

Ringle said that the Water and Sanitation District is the “biggest hindrance” to growth and development in Beatty. He accused the board of being “stuck,” that “they’re not invested in new ideas.”

“We have a window of maybe three years,” he said to bring in needed development as mining gears up in the area.

He said that when the last mine was here (the Barrick Bullfrog) “there was a town here” that it had a couple of grocery stores, and auto parts store, and a hardware store. He also contended that the schools “are no good,” and can’t attract qualified teachers.

He argues that, in order to make miners and their families want to live in Beatty instead of workers being bused in from elsewhere, the town needs to develop more stores, services, and housing.

“I want to get people who are progressive,” he argued.

“Nothing is going to come here. We have to make it come here. If you have people who want to keep the town small it will stay small.”

Another BWSD board member, Albert Verrilli, rose to defend the board. He invited people to review minutes of the board’s meetings to see whether there was any chaos or if the meetings were “orderly.”

Ringle countered, “Just because it was orderly doesn’t mean anything was accomplished.”

He said that he may develop his own separate water and sanitation district using water from the Revert Springs property he owns.

The other presentation of the meeting was by Mike Smith, of Beatty Disposal, who said that his company would like to hold a metal recycling event in Beatty. Besides smaller quantities of various metals, he said that they could also handle abandoned cars and appliances.

The board, which has been working of finding a way to clean up the town, welcomed Smith’s offer, and will set a date for the event.

BTAB member Perry Forsyth suggested they might want to hold the event every three months or so, but Smith said, from his experience, there is much more participation when these are done annually. It is important to have enough participation to make the effort worthwhile.

Board member Melody Koivu encouraged people to contact the town office to say that they have items that they will need picked up “so we can have an idea of participation to help plan the date.”

Following Beatty Disposal’s presentation, resident Dee Crawford said she felt like withdrawing her request of $200 for supplies for a town clean-up project she had been planning. She thought it might not be needed on top of Beatty Disposal’s event.

Audience and board members, however, said that there were probably plenty of clean up to be done beyond what Beatty Disposal would do, and encouraged her not to withdraw the requested funds for her “neighbor to neighbor” project.

“I guess I’ll take the money and run, guys,” Crawford responded, and the board granted the money.

The board approved a $6,000 request from the Beatty Chamber of Commerce to help with grant matching funds for the chamber’s radio advertising campaign for Beatty tourism.

Patti Butler explained that the chamber’s budget had been cut each of the last two years, leading to their need for assistance. She said that anecdotal evidence from visitors and a huge increase in “hits” on the town’s website show that the ads are producing results.

The board also voted to waive the fee for the use of the community center the second Saturday of each month for the “Beatty Market,” organized by Starla Gallagher.

Gallagher said that she was open to hosting all sorts of vendors, be it yard sale items, people’s crafts, and so on. They have held the market twice so far in Cottonwood Park. She said the first time they had 11 vendors, and the second time six, “but it was very hot.”

They also voted in favor of requesting a solar project exclusion zone around Beatty.

Kevin Emmerich said that such a request could be submitted next April when the BLM would be reviewing and amending its Resource Management Plan in light of the Green Link West project. The board will consider specifics, such as how large an exclusion zone to ask for before that time.

Whatever else, all the controversial items on the agenda have swelled the attendance at the last several BTAB meetings to several times the usual turnout.

Ybarra and Anderson were contacted for this report but didn’t respond prior to deadline. Watch for coverage in the Friday, July 30 edition.